The Cabin in the Woods Blu-ray Review

How do you come up with a novel twist on the tried-and-tested-to-death slasher-horror formula? 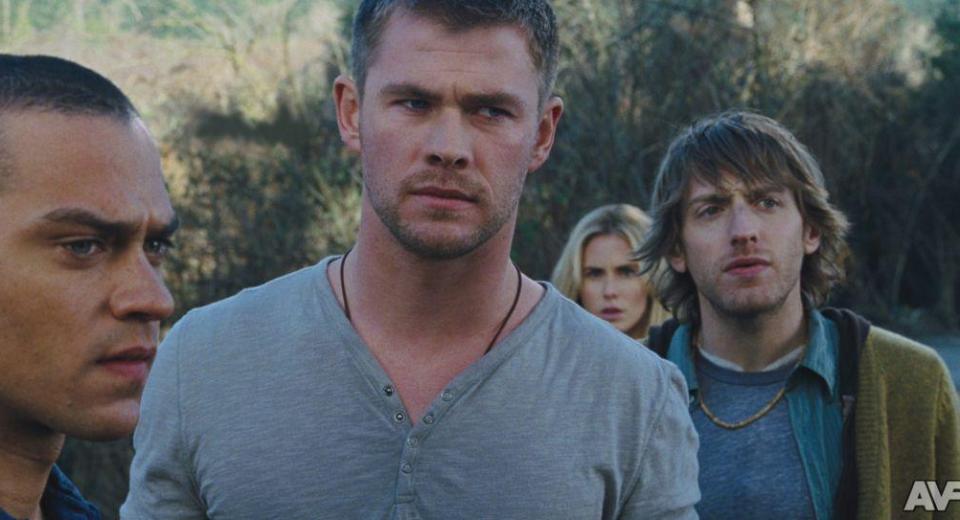 The Cabin in the Woods hits Region B-locked UK Blu-ray with... well, with a few problems actually. As many sites have reported, the first pressing of this release had niggling playback problems. The movie would pause briefly on several occasions across the course of the runtime, and then immediately resume playback. One forumite described it quite aptly as a layer-change effect – like the brief pause you used to get on DVDs when the layer transition took place. Only it happens on numerous occasions across the runtime. Depending on how bad your player reacted to this anomaly, and how frustrating you found it, it was either a minor irritation, or something capable of ruining the entire movie experience, but, in both cases, it was still a matter which needed to be fixed. Indeed rather annoyingly, it appears that the Blu-ray production company were aware of the problem from reviewed test discs, making the fact that the first pressings still carried the same defect even more insulting. Although it does not necessarily make up for the mistake happening in the first place, the fixes put into place have been swift, smooth and satisfying. It is impressive that, within a couple of days of alerting the production company to the problem, they took my details and order number and dispatched a replacement. The disc that I therefore review here is that replacement and, I should say up front, it has absolutely none of the problems inherent to the first pressing. Those of you who choose to go out and buy the movie now should find that the only stocked copies of the movie are the fixed versions, and that the defective discs have all been recalled.

Coming to Blu-ray with a 1080p/AVC encoded presentation in the movie’s original theatrical aspect ratio of 2.4:1 widescreen, The Cabin in the Woods looks dark, murky but ultimately fairly impressive in high definition. Indeed one could argue that the bathed-in-engulfing-darkness look – which would, for another film, possibly be criticised – works extremely well when ratcheting up the tension across this alternative horror. Suffice to say that blacks are strong and deep and enveloping, and it’s these darker sequences where you have to trust that the amount of detail that you get to see is wholly intentional on the part of the filmmakers. The rest of the movie showcases largely excellent fine object detail, facial nuances, skin and clothing textures and subtle environmental touches, lending the piece a rich, authentic edge whilst also even allowing for a little 3D pop, particularly during some of the latter-end sequences (I’m thinking about the motorcycle bit). The colour scheme is rich and vibrant, despite the overt night-setting and darkness-dominated style, with those tones on offer presented vividly and largely accurately. Skin tones look particularly authentic. With no significant digital defects, and only an intentional level of grain adorning this release, it’s almost without fault, and although difficult to regard as demo material, this is more to do with the chosen style, than the actual video presentation and so it still scores a demo mark. Perhaps this is only fitting since, if you wanted to demo a slasher-horror, then you couldn’t do much better than this.

On the aural front it’s much easier to award top marks with zero reservations. The accompanying DTS-HD Master Audio 7.1 mix is a superb track which builds atmosphere and tension and then springs aural traps on you at every possible opportunity. The first ‘jolt’ comes at the least expected moment, highlighting not only the kind of movie you’re going to be watching, but also the style of track that it going to be on offer. Dialogue comes across clearly and coherently throughout, from the screams and shouts to the laughs and cries, largely emanating from across the frontal array although there were a couple of moments – namely where the vocals come across the tannoy – where the surrounds come into effect. Effects are exceedingly well represented, coming at you from every direction and in every shape and size. We get the subtle creeping noises in the forest; the creaking floors of the wooden cabin; the electronic hum of the office; and the slicing, chopping, gnawing, stabbing, shooting and hacking attack sounds, coming thick and fast wherever appropriate. Indeed the film’s effects-heavy third act is packed with effects noises – large and small – coming at you from all around. There’s some excellent surround steerage, the dynamics are impressive despite the chaos, and the elements within are rendered appropriately, no matter how large or how small. Bass adds a nice wallop to the proceedings and, with an engaging score to carry it all along, this is overall a great track, demo quality and easily perfect-10.

On the extras front there’s a whole plethora of interesting items to work your way through, ranging from a Commentary to an extensive Picture-in-Picture track; a Documentary to a selection of accompanying Featurettes, and even a Q & A panel to round things off.

Audio Commentary with Writer/Director Drew Goddard and Writer/Producer Joss Whedon is a thoroughly enjoyable listen – as you would only expect with Whedon on board – as the two filmmakers chat fondly about what they were intending to accomplish with this production, oftentimes spinning off at wild anecdotal tangents to create an impression of not only how this production came into existence buy also how their innovative minds work. Interesting, informative and funny to boot – what more could you ask for?

It’s Not What You Think: The Cabin in the Woods Bonus View Mode offers up some extensive background material which plays in tandem with the movie itself. Ticking all the right boxes – from interview snippets with the cast and crew to behind-the-scenes glimpses of the shoot, the sets and the effects – this is another great addition which fans will want to check out.

We Are Not Who We Are: Making The Cabin in the Woods is a half-hour Documentary which arguably superior to the PiP track and a quicker fix than the admittedly great Commentary. Hosted by Whedon himself we get some further anecdotal trivia interspliced with pop culture references and comparisons across Whedon’s body of work, all the way back to Buffy. They cover some of the same ground as on the Commentary – how they came up with the concept; the quick turnaround of the script; and the ideas and horror references that they threw into the mix – but, alongside the behind the scenes footage this arguably makes for a more accessible extra.

The Secret Secret Stash – Marty’s Stash is a quirky little 6-minute addition which has Whedon regular Fran Kratz talking at length about the use of pot in the movie. It’s difficult to discern whether he’s acting high to mess with us on purpose, or actually alluding to his personal knowledge of smoking cannabis (and Whedon’s), but, either way it’s a funny little addition with one of the lead actors.

The Secret Secret Stash – My Name is Joss and I’ll Be Your Guide is closer to 8 minutes and has Whedon – on set – giving us a little background into the production design for the movie, again in his own inimitable, amusing fashion.

An Army of Nightmares: Makeup and Animatronic Effects spends 12 minutes looking at the extensive practical effects work done for the final act of the movie, also noting some of the subtler touches they had to add earlier on.

Primal Terror: Visual Effects spends roughly the same amount of time looking at the visual effects, offering up comparisons between the pre-visualisation footage, the greenscreen performances and the CG effects layered on top.

Wonder-Con Q & A is the best part of half-an-hour in length and showcases the Wonder-Con panel hosted by Joss Whedon and Drew Goddard, where they offer up answers – mostly highly amusing ones – to fan questions.

The disc is rounded off by the original Theatrical Trailer.

Whilst it won’t single-handedly reinvent the genre, Joss Whedon’s revisionist horror movie The Cabin in the Woods does go some way towards giving it a new lease of life, proving that you can still be fresh and original, whilst ticking all the required boxes expected with such a piece. Providing a taut script and plenty of tense sequences, as well as – of course – a script laced with his trademark wit, the classy limited-budget film will likely prove popular amongst not only horror aficionados but also a far wider crowd, and deserved a considerably better-promoted tour at the cinema.

On Region B-locked UK Blu-ray, despite a false start with some first print defects, The Cabin in the Woods boasts impressive video and audio as well as a whole plethora of extra features. Fans of the film should have no hesitation in picking this up – particularly since the pressing company appears to have rectified the initial fault – and newcomers should consider it well worth a rental if not even a blind buy. Recommended.