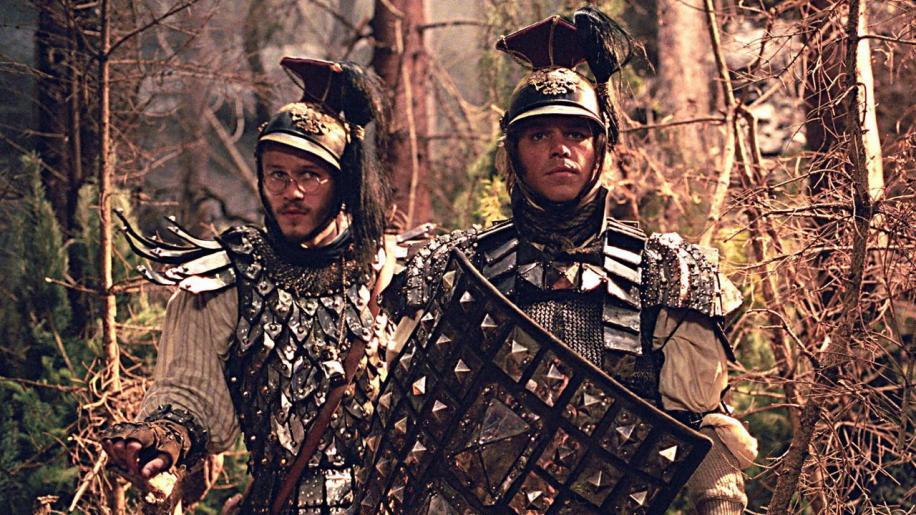 As I normally state with such a recent release, I would expect nothing but a fine transfer, or at least one that doesn't have dust and scratches. This one, does not suffer from dust or scratches, which indeed is a good start. Colours are an odd one to explain, as they are deliberately manipulated (Gilliam explains this in the commentary track), so to judge them isn't the easiest task, but the image is bright and vivid with some excellent bold colours. Black levels are suitably fine, which is important during the scenes in the forest, which is dark and oppressive, which thankfully is conveyed well. However, the image does suffer from slight haloing, which isn't the worst I've seen but of course, there have been better as well. Detail for the most part is fine without being exceptional, although there's never been a moment where I thought it was poor and no artefacts were present either. So, all in all, a reasonable transfer, but not exceptional. With a Dolby Digital 5.1 soundtrack, this is not going to be a demo disk anytime soon, but it is pleasant enough. With the surrounds being quite active and the dialogue being crisp and clear throughout. Small criticisms would be that the LFE isn't that noticeable during the movie for the most part, then it comes alive during one or two points such as the forest fire sequence, so don't expect a huge bass workout in general. Other than that, this is perfectly fine and offers an enjoyable, but not amazing soundtrack. We have a commentary by Terry Gilliam which is quite interesting, from anecdotes and his opinion on actors to how certain effects were made and the soundtrack, you should find everything you want to know about the movie in this chat track. The Deleted Scenes have optional commentary as well as the facility to play them individually or altogether. There are 12 in total running for 15.05 minutes and are displayed in non-anamorphic widescreen. I don't think they add anything to the movie and can understand why they were cut/altered, but there is one moment I found amusing with Cavaldi. Bringing The Fairy Tale to Life is a 16:30 making of/behind the scenes, where we hear from the actors and Gilliam talking about the movie, what attracted them and what the movie is about (i.e. not a biography). It's fun, it's interesting enough and it has more of Monica Bellucci in it, which is no bad thing at all. I did like the story Gilliam tells early on that he pictured Damon as Jacob and Ledger as Will, but they actually wanted it the other way around, which intrigued Gillam as they would be effectively playing against type. Finally, we have The Visual Magic of the Brothers Grimm which runs for 8:41 and is, as the name implies, relating to the special effects in the movie. The irony here is how proud they are of the wolf, which I mentioned earlier and how much effort went in - shame it really doesn't show on the screen. It's interesting to see how much CGI is used and the running time is trim enough that it isn't particularly obtrusive. Again, another interesting fact mentioned is how the movie was delayed by a year (I think the troublesome shoot this movie had is well documented). Well, with a lukewarm reception, I expected this to be a lot worse than it is. While it certainly isn't a biography, it does skew the tales of the Brothers nicely and should give you an entertaining evening, if nothing else. As I said, this is probably Gilliam at his most accessible, which isn't a bad thing in some ways, the Cavaldi character is an absolute hoot and when one looks back on the movies released this year, you can definitely do a lot worse. Give it a whirl.