Thankfully not quite completely faithful to the borderline unpleasant comic 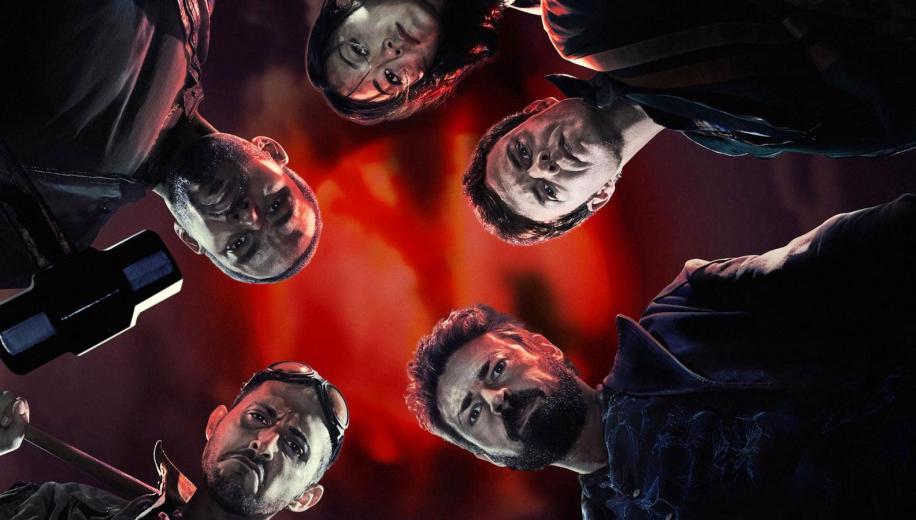 Garth Ennis' extremely graphic comic run gets brought to life by Preacher's Seth Rogen/Evan Goldberg duo, putting a very dark spin on life with superheroes who are anything but.

Ennis' source work was a tough read, peddling not only in rape, or even gang rape, but superherogang rape, and testing the limits of its readership with increasingly nauseating tales of superhero debauchery and the brutal gang of human vigilantes who get seriously messed up trying to stop the world's supposed idols from getting away with it.

The idea of bringing The Boys to any kind of screen would have seemed absurd a decade ago - it makes Kick-Ass look like a Disney romp - but then Rogen and Goldberg collaborated on an Amazon Prime adaptation of the unfilmable Preacher series (to faithful, albeit abortive effect, now that it's been cancelled), and, unsurprisingly, managed to pinball off that success to bring us The Boys. The result is dark, satirical, and utterly engrossing.

Goldberg, Rogen and developer Eric Kripke have a good handle on the material - which doesn't only throw back to the old boys club days of demeaning power plays, but actually offers a rather worrying reflection of the current political climate; you only have to look at the people in power to wonder just how much they can get away with, with zero authority to call them into check - and the pilot alone should have you committed to this dark superhero drama.

If you thought Watchmen offered a decent look at supers gone wrong, Miller's The Dark Knight Returns gave us a glimpse at a corrupt Superman, or even the more recent Brightburn which tapped into a better reflection on what could have happened had Superman grown up wrong, The Boys only takes it to the next level. Slow-burning the tales (although let's hope it doesn't burn out treading water like Preacher arguably did), there's a super group of colourful people on offer here, on both sides of the equation.

The 'heroes' are basically a very thinly veiled Justice League - Banshee's Antony Starr makes for a scary alternate Superman in Homelander; House of Cards' Dominque McElligott as Queen Maeve (Wonder Woman); Shaft's Jessie Usher as A-Train (The Flash); and Chace Crawford as The Deep (Aquaman), whilst traumatised new girl Starlight is pure Supergirl, played by Erin Moriarty (Jessica Jones). They're all run by Vought VP, Madelyn Stillwell (Elisabeth Shue). Of course, the real heroes are a vicious bunch who will inevitably become the titular group eventually, led by an oddly-accented Karl Urban (we want Dredd 2!) as Billy Butcher, who brings innocent Hughie (Jack Quaid) into the inner circle that also includes Tomer Kapon's Frenchie, Karen Fukuhara's Female, and Laz Alonzo's (Fast & Furious) Mother's Milk. As a nice nod to the comics, Simon Pegg also cameos as Hughie's dad (the comic artists based the character of Hughie on Pegg - and, a decade ago, arguably he'd be the first choice for the role).

For fans of the book run (and even those who jumped off after it hit Herogasm), The Boys is a very faithful show - although arguably not so faithful that it ends up utterly unwatchable - teeming with ultraviolence, superheroes gone wrong, and very human vigilantes getting busted up trying to find some justice in a twisted, but all-too-real world. Fans will be eagerly awaiting what happens next.

Detail is impressively realised, and The Boys enjoys a fairly gritty look which translates very nicely to a top tier Blu-ray presentation, with grain intact and the well-integrated effects and, at times, almost film-standard shots looking extremely good. Sure, it's a shame not to have that extra HDR edge, although Amazon hardly have the Netflix DV edge (not that even that is always implemented well), and a Boys 4K Blu-ray release would have likely proven impressive and popular, but the SDR Blu-ray stands up to the challenge, and delivers a very nice image indeed, popping with some rich vibrancy, strong blacks and a suitably faithful rendition of the already heavily textured and stylised source material.

The Boys Season 1 Blu-ray enjoys a healthy and frequently impressive DTS-HD Master Audio 5.1 track which delivers the goods on all fronts, from dialogue to score to effects.

Dialogue remains effortlessly rendered, largely front and centre to the affair, but dominant where necessary, and never drowned out by the rest of the track, which affords a decent score that gets resonant reproduction across the array, and some punchy and nuanced effects - superpowers in action, super-speed, heat vision, and so forth, with the mercenaries after them wielding the best weapons they can get their hands on, as high powered rifles boom across your living room, and explosions afford some nice LFE weight. Effects, when used, are almost film standard, and the track delivers them with aplomb.
﻿

There's little in the way of extra material here, and unfortunately nothing from Rogen and Goldberg themselves.

Little in the way of extra material

A quarter of an hour of Deleted Scenes and a few minutes of Bloopers are scattered across the set.

The Boys Season 1 is hardly a pleasant watch, but it's a very compelling one, and thankfully nowhere near as extreme as the comic it was based on. Following on from Preacher, it's another strong adaptation from the Rogen / Goldberg duo, and hopefully they'll be able to keep this train on the tracks.

Sony's 3-disc Blu-ray release of the first season of The Boys is a very nice package, with impressive video and audio, even if there's scant extra material. Fans who didn't get the chance to catch it on Amazon should definitely consider picking it up now.