There was never just one. 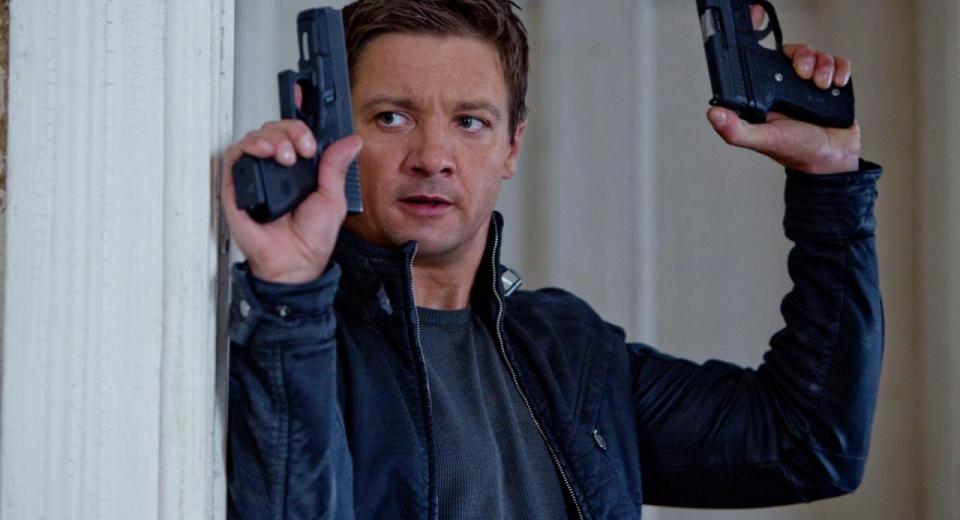 The Bourne Legacy hits UK shores with a Region Free 1080p/AVC High Definition video transfer which looks pretty stunning. Detail is impressive throughout, despite the gritty stylisation, with sharp definition that never showcases edge enhancement; fine object detail without any aberrant noise; strong skin detail, background textures and clothing weaves, without any noteworthy digital defects. There’s no banding, aliasing or blocking present, although a hint of crush does appear on some of the darker tones – possibly inherent to the source material and source objects rather than the transfer itself. The colour scheme offers up an occasionally blue-dominated, heavily stylised palette which is represented accurately throughout and promotes vivid, vibrant primaries and reasonably strong black levels. A hair’s width away from being a perfect-10, this is still demo quality material through and through. Even more impressive is the accompanying DTS-HD Master Audio 7.1 track which is simply perfect. Right from the get-go this is a thoroughly immersive offering which will sweep you up and keep you on edge for the duration, needling at you with fine atmospheric touches; thrumming at you to heighten the tension; or pounding at you during the punishing action sequences. Dialogue never takes a back-seat to the rest of the proceedings, promoted clearly and coherently from across the frontal array and given dominance where necessary. Effects are myriad, and not only create a heady atmosphere, but bring to life the various different distinct locations, whether it’s the snowy mountainscape or the bustling cityscape; the isolated farm house or the clinical black ops lab. Each one has a different feel to it and the soundfield adapts to project a different accompaniment depending on where you are. The action scenes obviously offer up some more thumping moments, with frequent gunfire, occasional explosions and a few thundering car crashes all smashing through right into your living room. Bullets whiz around the soundscape accurately, and the LFE channel ensures that there’s a realistic depth to every single shot fired, and a suitably painful thud behind each impact. The score only adds to this perfect offering, providing a suitably engaging accompaniment throughout, and giving the surrounds – and rears – almost no reason to ever let up. Superb. Although not packed to the hilt, this new addition to the Bourne franchise comes with a decent selection of extras that covers all the bases.

Writer/Director Tony Gilroy teams up with his brothers: co-writer Dan Gilroy and editor John Gilroy, as well as the director of photography Robert Elswit, second unit director Dan Bradley and production designer Kevin Thompson to deliver an information-overload full-length running commentary. Whilst I suspect the multi-headed offering was better than a Tony-solo, you do lose track of who’s who as they piece together the enduring nature of the franchise; the potential future; the production; the shoot; the cast and the key sequences. Worth checking out.

Re-Bourne allows us 6 minutes’ insight into how the filmmakers went about expanding the Bourne series into a potential new franchise which was not dependant on Matt Damon’s pivotal character.

Enter Aaron Cross runs at 7 minutes in length and looks specifically at the introduction of Jeremy Renner’s character, discussing this new addition to the franchise who is struck from the same Bourne mould but tasked with becoming a distinctive character unto himself.

Crossing Continents: Legacy on Location is 8 minutes of looking at the filmmakers scouting and filming on location, attempting to craft an international thriller with exotic locations.

Man vs. Wolf spends a brief 5 minutes looking specifically at the key sequence with the wolves, with both Jeremy Renner and his stunt double, as well as the various different wolf incarnations – real and effects-driven. In addition we get a 2 minute Wolf Sequence Test which looks at the animated storyboards and pre-viz versions of the scene.

Capturing Chaos: The Motorbike Chase spends 8 minutes looking specifically at this final big action sequences, briefly investigating how it was put together, what went into the stunts, and how they made it so exciting and real.

Here we get three additional sequences, totalling 7 minutes of new footage, each with optional Commentary from the writer/director, his brothers and the director of photography (basically the majority of the same people who provided the main commentary). The first is quite a long, tense little moment where Cross is pulled over by a Highway cop and shows the tradecraft that goes into creating a false identity; the brief second has the tracking team discussing some of the evidence they’ve collected whilst trailing Cross; and the third spends a couple of minutes with Albert Finney, showing what happened to his character in the end. Although worth checking out, none of them really needed to be added back in to the already-long runtime. Regarded as a standalone spy-action-thriller – if that’s even possible to do given the fact that it is enshrouded in, and dependent upon, the franchise’s heritage – The Bourne Legacy is a solid, intelligent and frequently engaging addition to the sub-genre. But up against its benchmark-setting predecessors, it struggles to keep up the momentum, and fails to retain the same significance as the previous entries. Its disappointment comes from being merely a good chapter in what is a great series. Still, Renner’s Cross is a competent and worthy lead, and fans of the Bourne series will certainly be interested in the exploration of the legacy from the previous trilogy, and pleased by the fact that it will undoubtedly continue. Personally, I hope that – sooner rather than later – they bring Matt Damon’s Jason Bourne back to the series; a series which was defined by him, and which will always be overshadowed by Bourne in his absence.

On Region Free UK Blu-ray we get stunning video and audio as well as a decent set of extras – mirroring the US release – all of which should make this a no-brainer for fans to readily pick up (if they haven’t already!). Those on the fence about this particular entry should be tempted by the excellent release, and only need to be prepared for the fact that this is just not as good as the other Bourne films; beyond that, it’s a solid, at times exciting thriller that is worth seeing.