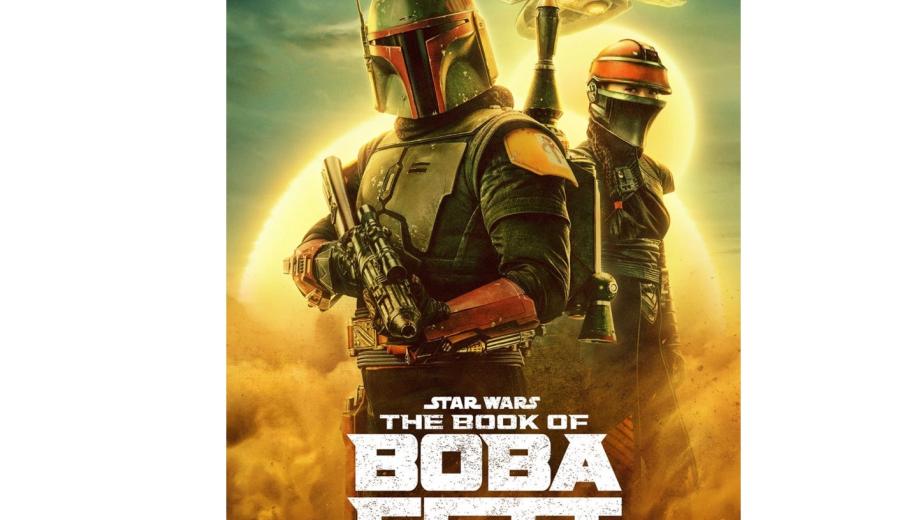 Disney+ rounds out the year with the opening episode of its latest Star Wars spin-off, as fan-favourite Boba Fett's past and future get fleshed out.

Despite barely any actual screen time in the original Star Wars trilogy's second and third instalments, Boba Fett has long been one of the most iconic characters to come out of the entire universe, making an air-punch-worthy return to the small screen in Disney+'s excellent flagship vehicle, The Mandalorian, and now getting his very own seven-part spin-off series where we get to learn a little bit more about what happened to him after getting swallowed by a Sarlaac, as well as witness his uncertain rise to power in Jabba's Palace, as he takes control of the criminal empire on Tatooine.

After helping The Mandalorian on his quest, Boba - reunited with his prized armour and teaming up with reformed master assassin Fennec Shand, whose life he saved - takes the throne at Jabba's former palace, but finds the locals hardly forthcoming with their 'tributes' to their new master. With intermittent spells in the Bacta tank igniting memories of his former life, trapped in a Sarlaac, robbed by Jawas then taken slave by Tusken Raiders, Boba is forced to confront his past as well as his present and forge a new future for himself.

The Book of Boba Fett looks typically fantastic on Disney Plus, in 4K UHD with Dolby Vision, with a decent Dolby Atmos accompaniment (as usual, you have to dial that baby up a whole lot to get some heft out of it). Fans of The Mandalorian will find the presentation utterly in-line with what we've known before, enjoying the sun-kissed desert-dominated Tatooine setting, as well as the future-Moroccan architecture, brought to life wonderfully with the same VFX tech.

... reminding us of some of the most enjoyable early episodes of the original The Mandalorian

A hell of a lot happens in these first 38 minutes of the show but it's still innately impossible to see just how things will shake out on the Boba front, suffice to say that it gets off to a decent enough start, perhaps not resoundingly exceptional, but certainly delivering on most everything that fans would have wanted this spin-off show to dip into.

The present day shenanigans are slow-burning, with a nice glimpse of the ageless Jennifer Beals as the Twi'lek manager of a local establishment, as well as some action on the streets of Mos Espa - as well as the rooftops (Parkour!). What's more interesting is arguably the exploration of the past, flashing back to the events of the Prequel Trilogy that shaped his childhood, and then the events of the Original Trilogy that nearly sealed his fate. Sure, the actual method by which Boba escaped the Sarlaac may not have ever needed to be fully detailed - the clues in The Mandalorian were arguably enough to provide a suitably mythological mystery to the whole thing - but it is nice to see how the Jawas ended up with the armour, and how Boba (presumably later in the season) learned to fight like a Tusken Raider.

The brief moments of humour are also a nice touch, with Temuera Morrison and Ming-Na Wen (the similarly ageless Agents of SHIELD mainstay) sharing decent chemistry as they try and figure out what to do with the crime empire they've just "inherited", and the Ray Harryhausen-esque reveal is a great little moment, further tying into Attack of the Clones, and reminding us of some of the most enjoyable early episodes of the original The Mandalorian.

Ultimately though, the show will not be able to rely upon treading the same ground as The Mandalorian, or merely visually exploring stories and ideas that fans were already aware of - that's simply not enough. Hopefully they'll move forward in some more interesting directions, addressing the disrespect of the town's Mayor, the potential assistance of Beals' Twi'lek hostess, and the truth about those that may want Boba deposed from the crime throne he himself stole, and gifting Boba his own voice in this ever-expanding Star Wars Universe. Time will tell, and with seven short episodes to work his magic, we'll return here in February to reflect on the whole season.

Having now finished its 7-episode first season, it's likely become clear to everybody by now that this really is less The Book of Boba Fett, and more The Mandalorian 2.5. This is a superb surprise for fans who are eagerly anticipating another season, and it immediately promotes at least three episodes - if not, perhaps, all 7 - to must-watch status for fans who want to keep abreast of the latest events that directly affect The Mandalorian, and will set the stage for the next season (certainly if you miss Boba, you're going to wonder how key characters have magically reappeared in The Mandalorian Season 3).

The big downside, of course, is that it shows up just how weak this debut season of Boba Fett has been, leaving many rightly wondering whether the character would have been better left an enigma - a mysterious but cool bit character who transcended his originally limited screen time to become iconic in the minds of countless kids growing up. Or maybe it would have been better to leave him with a nice little extended cameo in The Mandalorian Season 2, which offered just enough of a clue as to how he escaped the Sarlacc, but didn't go so far into Boba lore as to ruin the whole mystery behind him. Boba Fett has been a mixed bag indeed, with a decidedly weak run - a strong second episode and promise in the first ultimately undone by shiny biker gangs and a preponderance with telling a strange organised crime story that frustratingly involved preciously little organised crime, at least on the part of its supposed new overlord, Boba himself. Neutered perhaps by circumstance but more by bad design, Boba here comes across as a very weak replacement for Jabba, exuding no sense of threat or stature over others, and mostly wandering around being extremely nice and The Mandalorian-like in his actions, whilst paying lip service to his status as overlord by - of course - collecting protection money from the townsfolk under his control. It's an oddly "Disney" tale, that makes several glaring mistakes, not just in having him spend far too long with his helmet off (didn't they learn from Stallone's Judge Dredd vs. 2012's Dredd, or even from The Mandolorian himself?), but also in having considerably better tales told whilst he's dreaming in a bacta tank (it's always bad when the flashbacks are better than the main story, and one of the flashbacks nods to Lawrence of Arabia, so really the present-day brewing gang war is pretty tedious by comparison).

The absolute nail in the coffin actually comes courtesy of the best episodes in the season, as we spend the fifth AND sixth episodes almost entirely without the title character, and in the company of The Mandalorian himself, rubbing salt in the wound by bringing back a whole host of other fan service characters, all of whom wow a hell of a lot more than Boba (with better, or more subtle, CG usage making their appearances far less "uncanny valley" than we previously saw). The only way to finish this season off strong would be with a kick-ass final episode, and Boba does go big for its finale but it's still not quite enough, imbuing it with hints of Godzilla vs. Kong (or, more accurately, Kong vs. Mechagodzilla), and hints of the Godzilla Chewits adverts, and the old Kong movies too, but also smacking of desperation at times, because it simply can't compete with the better-crafted Mandalorian show. Nods to classic Ray Harryhausen animation abound when it comes to the creature design, and it's nice to have some further reinforcement of some expanded Star Wars lore in the form of surprise villains.

But Robert Rodriguez is a little clumsy with his handling of some of it, trying to pack a LOT into the closing hour (the longest episode) but fumbling even scene dissolves, whilst fast-editing some of the action presumably because it occasionally looked movie-scale in its scope and they were swiftly running out of money. He also can't muster the same tension as was evident in key episodes of either season of The Mandalorian, perhaps because of the presence of The Mandalorian himself (who is hardly likely to die before the already announced Season 3), or perhaps because the Rio Bravo story that he's aping from feels a little bit... predictable. Certainly there are great moments across the season - largely in the final few episodes - and, as noted, nobody is going to want to go into The Mandalorian Season 3 without having seen this, but frankly it doesn't live up to the name in its title at all, and needed a whole lot more menace, a whole lot more crime, and a whole lot less reliance on a superior character to suddenly swoop in and save the day. Because all he really did was steal the show. And, honestly, the episode where Boba gets him armour back and takes on a boatload of stormtroopers in The Mandalorian (also directed by Rodriguez) was better than anything here, which makes you wonder whether we really want another season - or even this season - and whether Boba would have been better served dipping in and out of his sibling show.

The Book of Boba Fett is available on Disney+ in 4K Ultra HD with Dolby Vision and Atmos, weekly from 29th December 2021.