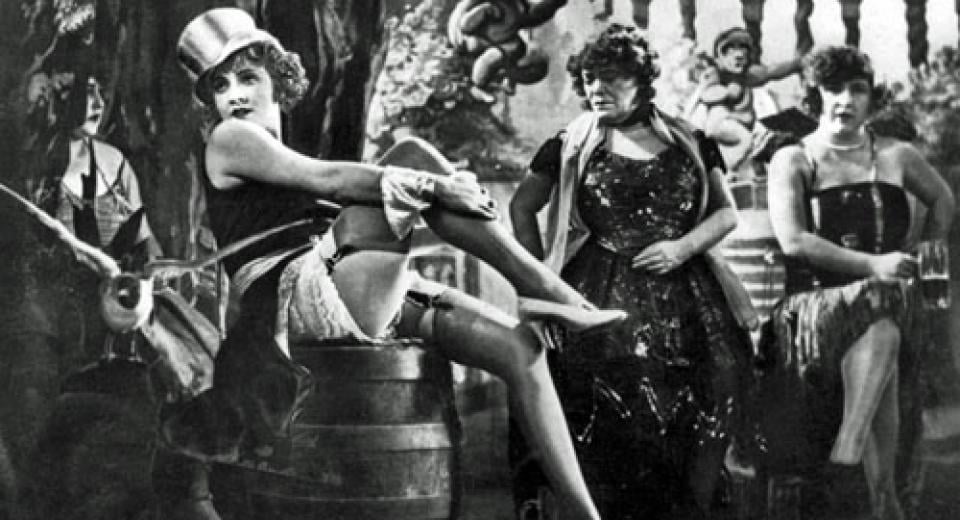 The disc presents a theatrically correct 1.19:1 original aspect ratio AVC MPEG4 transfer and is Region locked to B.

Obviously a film from 1930 is going to have issues and this print is no exception, however the restoration work, as well as the 1080p presentation does mean that the image looks far better than any previous incarnation. Detail is pretty good, there is texture to skin, eyes look suitably watery, and there are slight weaves to clothing, especially the costumes worn by the girls in the Angel. Backgrounds hold detail well, the various posters that adorn the walls are easily identifiable, with the opening shots displaying remarkable depth of field into the frame by careful consideration to the composition.

Brightness and contrast are set very well to give a very strong grey scale. There has clearly been a little contrast boosting to deepen the blacks and brighten the whites, but there is no sign of crushing or clipping that wasn’t already there in the print. Such manipulation has darkened the picture somewhat, but not overly so, and does give rise to some very deep greys (not quite black) which adds some nice depth to the frame. The brightness does fluctuate occasionally, especially in the edges, which can also grey considerably in places, but not distractingly so, and considering the age is perfectly acceptable.

Digitally there are no compression problems, nor is there any unnecessary edge enhancement. The print, however, still displays numerous defects in the shape of tramlines, black and white specks with the occasional spot of negative damage – again to be expected considering the age, but all told this is a well-defined print.

The English language print has not has as much attention lavished on it, most noticeably it has not had the benefit of a contrast overhaul, this means that the greyscale is far more mid-tone, thus blacks are pretty non-existent. The whites are often over-saturated in that there are numerous places where there are ‘ghost’ images outside of the white area, candles for example, and whilst it is not that distracting, such examples are not noticed at all in the German version. Likewise the print damage is more extensive, with far more negative damage noticeable, but again, to be expected since this version was only discovered in a very poor state just a few years ago.

The better version for picture quality is clearly the German version. Just the one track to choose from German LPCM stereo (actually it’s mono piped into two channels). Obviously the caveat here is that this is an eighty year old sound track and was one of the very first recorded, thus you cannot expect some wonderful sound design, even though there are clear efforts to do so. Basically the track is very lacking is bass; this makes everything rather shrill to listen to, taking away from and ‘natural’ sounding. Dialogue is well realised and understandable within the mix, slightly tinny, even the men, but it’s perfectly typical from a film of this era. The score is quite loud and does occasionally distort, as do some of the crowd noises, but again it’s not too bad. There are attempts to add some design to the mix, watch for doors opening to allow in noise form different parts of the theatre and then shutting it out when closed. Something we don’t think about now, but back then was all new tech. In fact all the sound elements are fine considering their age. What is a problem is the amount of background hiss, snap, crackle and pop that the track contains. Indeed I could not maintain reference volume for this one since it was just too much – the clean-up may have brought out greater definition in the voices, but has also enhanced the background noise which I found quite distracting at times.

The English language version, on the other hand, is far, far quieter in terms of this background noise, and reference volume was a cinch. In fact it was needed since the track is quite quiet and the strong accents can make listening to the track a challenge at times, though I must say I enjoyed listening to this track far more than the German one. So whilst this is great news, it is not without its problems, there are many occasions where the sound and picture lose sync, which is obviously very distracting, it also contains many audible pops when it goes in and out of sync.

There is therefore quite a choice to be mad with which version to watch – both have equal merit as both have the actors speaking their parts; it comes down to which combination of picture and sound you want – better picture but harsh sound, go German, worse picture but easier on the ear sound, go English.

The subtitles on the German version are very clear, grammatically correct and hang around long enough so that you don’t miss any of the dialogue being spoken. The Blue Angel is a remarkable film in the history of the cinema for, most notably, it marked the first collaboration of was Josef von Sternberg and his eternal muse Marlene Dietrich. Together these two created a lasting legacy which started here, in 1930 and catapulted Dietrich into Silver Screen stardom. Whilst she sizzles on the screen as the seductive dancer Lola Lola, she is in fact only the co-star, the film belongs to Emil Jannings, celebrated as the finest character actor of his generation, and his performance here is no exception. The story tells of his school professor’s infatuation with a dancing girl, and the loss of dignity, respect and the ensuing insanity that comes with it. The deceptively simple storyline conceals a multi-layered structure, with von Sternberg filling every frame with complex ideas as a true pioneer of the art. Indeed much of modern cinema owes a deal of respect to films of the era and The Blue Angel is no exception, with early attempts at sound design, ‘modern’ storytelling and a racy leading lady. It is dark and complex, and, at times, difficult to watch due to Jannings’ central performance and the downfall he suffers, particularly since he never deserves the treatment he receives. It is hailed as a true classic of the genre, and rightly so.

Eureka’s Region B locked Blu-ray package pays a great deal of respect to this classic film by presenting both the German and English language versions; the German one being particularly well cleaned up, even if the sound is a little harsh, while the English one may suffer its problems it is not without its own merit and both are worthy of your consideration, as both are released in the UK, here, for the first time in high definition. The extras package is extensive and comprehensive, particularly the commentary with Tony Raynes and the video essay by Tad Gallagher, making this a must by for fans of the film as it trumps the US release in every respect. Highly recommended.