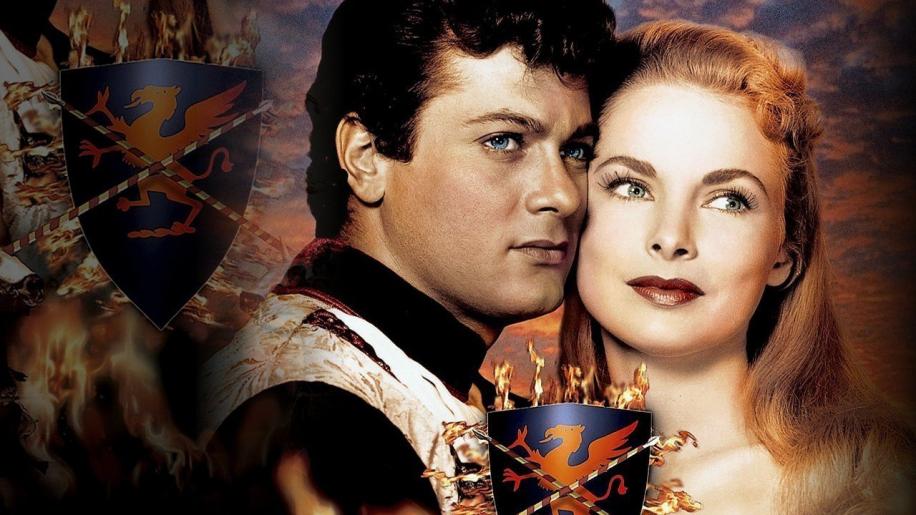 Presented with a 1.78:1 transfer that can't be anywhere near a close approximation of its origina ltheatrical Cinemascope aspect, Black Shield survives the ravages of time with an image that, whilst still somewhat faded and ill-defined, shouldn't upset lovers of vintage movies too much. I'm not sure how much restoration has been done on this, but the movie still offers plenty of those little fluctuations in contrast, scene-transition fades and wobbles and the odd nick and pop here and there. But, and this is the main thing, it still possesses some detail and doesn't distract with any overt digital tinkering.

With the precedent having already been set with the amazing clean-up job done on Robin Hood - to which this film owes a great deal - you have to make allowances for a lesser-regarded production such as this not coming anywhere near to standard of Flynn's legendary classic. However, there are definitely occasions when this transfer shines. For a start, some colours do pop from the screen with vibrancy and lustre even if the overall palette is a touch more restrained than you may expect from the golden age of Technicolor. Red, especially, is lent a life that looks superbly painterly even if it has been a bit enthusiastically boosted. Check out the griffin on the Falworth shield, the hoops on the croquet lawn, the various crests and emblems on tunics and the blood-rich curtains that really spring out of the image and then, of course, there's that medieval lipstick!!!

Whites appear to have been boosted, too, with Lady Anne's dress actually quite dazzling. Skin tones are pure Hollywood and very much of the era - ie, they weren't realistic to begin with. Black levels aren't that bad and the relatively few night-time scenes look fine. Shadow-detail isn't exactly highly prioritised but, given the structure and style of the filming here and the vintage of the source, this should not pose a problem. If you want deep blacks, then Curtis' wavy locks should make you happy.

There's a great and very detailed shot of a horse's teeth and flaring nostrils during the pivotal joust and many other close-ups can be quite striking throughout, but there is a kind of mushy quality to many shots - noise and vintage grain swelling together to obscure and soften. Some smearing occurs with the brighter colours and shots of intricate embroidery or heraldic flags, emblems and patterned costumes can also be slightly prone to shimmering. There is also edge enhancement to distract from some of the more sunny outdoor scenes. But a lot of these complaints can be brushed aside and forgiven by all but the most discriminating and picky of viewers. And, besides, Mate's sense of framing is maintained with distinction and there is a definite sense of depth to the image that can be very pleasing. Outdoor scenes of the training and the ladies playing croquet, or the jousting and Myles' first suiting-up in armour have a great spatial quality for such an older film. Even the indoor shots of Myles and Francis walking through the dormitory or the group scenes of courtly ritual taking place have an interesting sense of subjective placing within the image.

So, whilst no Robin Hood, Black Shield still does well with far less and fans of this bygone genre should manage quite nicely despite some unavoidable detriments. Well, this DD 2.0 mono track doesn't offer much for me to discuss really.

The whole thing sounds subdued and somewhat muffled at time. The formulaic and clichéd score lacks any strength and the dialogue, though clear enough, is quite sunken with the mix. The bash and crash of swords, shields, lances and axes is hardly anything to write home about but, to be honest, you can't expect much more than this delivers with a sound design that possibly never set the world alight in the first place. Black Shield is not a major film by any stretch of the imagination and even featuring two big stars such as Curtis and Leigh it didn't become a classic or much recalled entry in the historical adventure genre. Thus, it should come as no surprise to find that this release has nothing in the way of bonus features at all. Black Shield is a valiant entry in a crowded genre. Provided you aren't looking for anything either historically accurate or emotionally connecting, you should have a ball. This was made at a time when Hollywood was in love with the myth of chivalry and Mate's film certainly indulges in plenty of wanton mayhem. Curtis, however determined he is to leap about the sets and “have at ye!!!” every five minutes or so, is still possibly miscast. But the sense of sheer fun is ever-present and with Janet Leigh looking absolutely ravishing (and quite pneumatic, too) and some better-than-average fight choreography, Black Shield is a great way to while away some undemanding time.

Eureka's transfer is hardly colourful, with its Technicolor palette now dry and anaemic, but the print used is mostly free from damage and the sound doesn't present any errors along the way.

If you love sword-swinging derring-do with a hint of “Who Do You Think You Are?” thrown-in, you'll get a lot of this. Big daft fun.