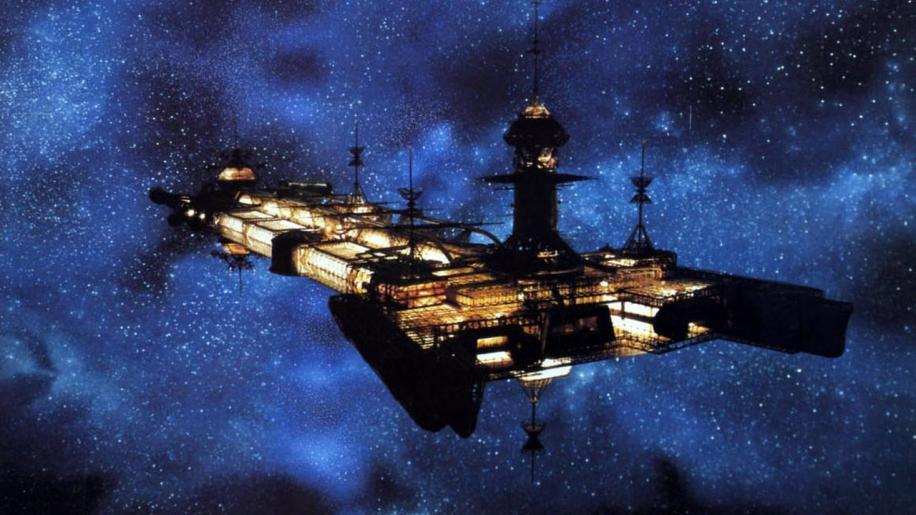 Originally released as Technicolor 35mm and 70mm prints, this movie is now pushing 25 years old and, I'm sorry to say, the transfer on offer here doesn't do too much to push that from your mind. Firstly, the good points; the presentation is framed in the correct ratio of 2.35:1 and anamorphically enhanced, and the colour saturation and contrast levels can be considered fair to good for a movie of this age. Unfortunately, this is where the good news ends. I can only assume that this transfer was taken from a 35mm print since there's a fair amount of grain on show here and there's also quite a bit of damage to the print appearing in the form of scratches, pops and a large number of drop outs. Disc encoding is, thankfully, good with only a few instances of banding and macroblocking visible (mostly in scenes containing a lot of smoke such as the escape through the garden and subsequent escape from the Cygnus), edge enhancement isn't too bad with only a few scenes suffering from obvious halo's but this comes at the expense of the pictures sharpness which can look a little mushy at times.

If you where lucky enough to see the movie on its original release in 1979 (which I wasn't) and you had a 70mm cinema screen nearby (which I didn't) then you may have heard the 6 channel mix, otherwise it would have been a Dolby Stereo mix for you. Here we have a Dolby Digital 5.1 mix (in a choice of English or French, Spanish is 2.0 sound only) which sounds more like the latter than the former. Most of the movie is very front heavy with only occasional use of the split rears for the odd bolt of laser fire, ambient effect or musical cue. The mix does have its good points though, with the Palominos escape from the black hole, the meteorite storm and the final (slightly baffling) part of the movie giving the rear part of the mix some action. Fans of gut wrenching bass may be a little disappointed though, there are some low parts to the movie but nothing like a modern action film.

Upon inserting the disc you're “treated” to a montage of Disney trailers. Thankfully these can be skipped by pressing the menu button. Diving straight to the extra features menu reveals, well, not very much actually. There's a featurette “Through The Black Hole” (16:29) and an extended trailer which runs for 03:24.

The featurette is, for once, not a publicity piece. We're introduced to Harrison Ellenshaw, the matte effects supervisor on the movie in 1979 and the son of Peter Ellenshaw, the visual effects supervisor and production designer at Disney in 1979. This is a cracking little feature. Without the normal padding and backslapping found on most recent releases, “Through The Black Hole” manages to pack its 16 minute running time full of information, not only regarding the effects themselves (including some behind the scenes shots of the magnificent 12 foot long Cygnus model), but also covering the production of the movie as one of the last made under the old studio system (under which all departments were “in house” as opposed to the, now standard practice, of subcontracting the effects work to another company such as I.L.M). He also touches upon the final baffling moments of the movie and tries to explain the concepts behind the visuals (although he does admit even he's not quite sure what it all means). As mentioned, this only leaves the extended trailer for the movie. Weighing in at 3' 24 the trailer looks a little beaten up with colours looking a touch faded, “woolly” sound and the sort of overstated voice over that was prevalent in the 1970's. With all that said it's a nostalgia trip and, along with the added “Overture” at the beginning of the movie, it whisked me back to Saturday mornings at the Classic cinema. Overall, there's not a lot here but at least what there is is worthwhile.

Star Wars meets Event Horizon and 2001 in this strangely non-kiddie 1979 Disney effects bonanza. The transfer could be better, the original print badly needs to be cleaned and the extras are skimpy (relevant and enjoyable, but skimpy) but, just as a slice of nostalgia, it's got to be a keeper.