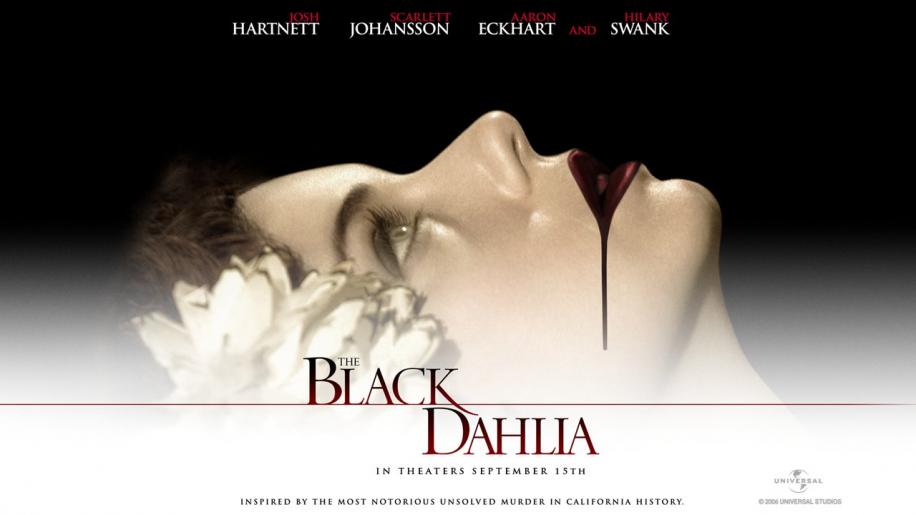 The Black Dahlia comes presented with a slick and polished 2.35:1 aspect ratio anamorphically enhanced widescreen transfer. Detail is generally excellent, with little softness, simply no grain and negligible edge enhancement. The colour scheme is stepped in period tones of brown and sepia, giving it that classic 'Godfather' look. Colours are generally very well represented, right up to and including solid blacks for decent shadowing and night-time sequences. Overall it is a beautiful, sumptuous rendition for De Palma's exquisitely shot thriller.

The audio presentation is a decent enough Dolby Digital 5.1 track. The dialogue, including Harnett's overbearing narration, comes through clearly, predominantly across the frontal array. Surrounds get quite a lot of use, some from effects, like gunshots, doors slamming and such, but mostly from the score, which dips in and out to enhance the different scenes as appropriate. It's a reasonable score as well, very occasionally reminiscent of the scoring for two of De Palma's classics, The Untouchables and Carlito's Way, but never as good, although still extremely well presented.

First up we have Reality and Fiction: The Story of The Black Dahlia, an eleven minute exploration into the origins of the story, the real murder victim Elizabeth Short and the heinous facts of her murder. We get clips from the movie and interviews with the Director, real police detectives and the stars of the movie but the real gem is the fact that much of the Featurette is narrated by crime novelist James Ellroy himself, explaining the very personal meaning that this story has to him. The crime photos and black and white footage is quite haunting and overall this is a nice offering.

The Case File is a twenty-minute Behind the Scenes Documentary that looks at how the book became a movie, after some twenty years of production studio wrangling. Again, Ellroy, is back contributing, alongside the Producers, the Director, the stars and the Screenwriter. They talk about the difficulty in adapting the book, the characters and the actors that embody them, the training for the boxing sequences, the aspects of the original story that had to be 'streamlined' out and the consultation that Ellroy gave to the project. We get footage of the movie being filmed, the Director giving directions on set and stills from the production to complete a very nice Making-Of.

The De Palma Touch is a sixteen minute Featurette on the Director and his own inimitable style. We see more behind the scenes footage of him directing, with Ellroy back once again and - of course - plenty of contributions from De Palma himself, discussing locations, how he filmed certain sequences and so forth. They discuss how it was shot in Bulgaria, where they had to re-create the Los Angeles locations as they would have been in the Forties. Another interesting offering, this Featurette completes a trilogy of worthy extras that go some way to make up for the lack of Director/Writer Commentary.

The Black Dahlia is definitely a case of style over substance, but thankfully there is still some substance left to hold your attention. It comes presented with a suitably glamorous transfer and a decent enough audio track, as well as some historically interesting extras, with plenty of input from author James Ellroy. Overall, crime scene fans will probably have to pick it up and it is highly recommended for those who enjoyed LA Confidential. Perhaps it is not classic De Palma, but even a fairly standard movie from him is elevated by his touch and so you could do a lot worse than picking up this modern day film noir.