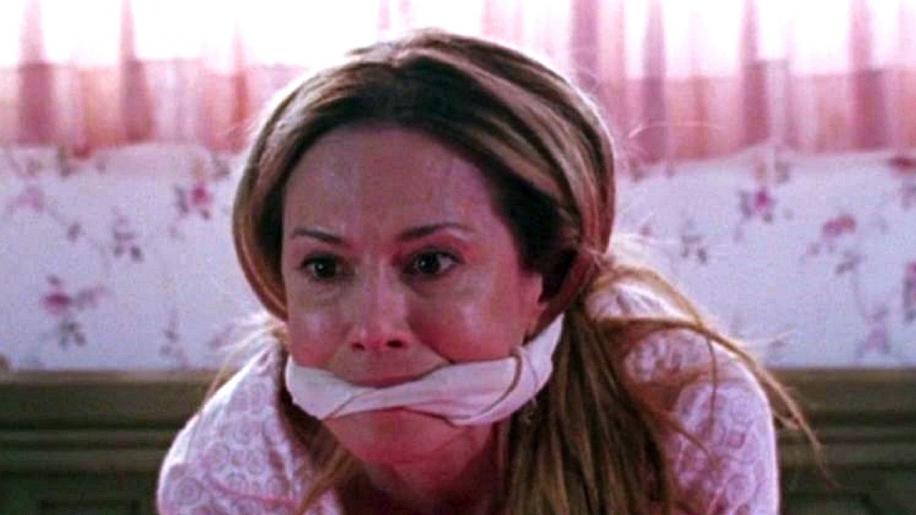 The disc has been given a theatrically correct 1.85:1 aspect picture, anamorphically enhanced for widescreen TVs and an average bitrate high enough to eclipse nearly all potential problems. As can be expected from the title, this film has a lot of snow, a lot of white. Traditionally this can cause contrast problems and edge enhancement but thankfully this disc shows the bare minimum of both. The film was digitally colour treated this gives the entire look a blue hue, denoting the cold, it is very effective and gives the film a good look. Colours are strong and bold without bleed or wash, contrast and brightness are superbly set to give good contrast between the snow and what is happening on it. There are decent shadows, not that the film uses them much, and strong detail, no aliasing or posterisation that could have become a problem with the white grading. In fact the only small flaw was some film grain here and there, otherwise this was a pristine print, excellent considering the nature and budget of the film. Only the one sound track to choose from an English Dolby Digital 5.1 track, unfortunately not quite a good as the visual department. The track concentrates on the front three, the rears only ever coming in to flesh out the score, when they do this is a welcome change, and though the film doesn't really cry out for a full on surround experience I felt the track was lacking a little. Thankfully the separation was good and the range was fine, some decent bass levels holding a predominantly mid range track together well. Dialogue was clear and precise and had good tone. Overall it was a tad quiet, some volume adjustment was needed, but it was never bad and suited the film well. First up we have an audio commentary with director Mark Mylod. It is a relatively quiet affair, Mylod is happy to talk about most of the usual topics, casting, script, locations etc. in a soft welcoming voice. Not a huge amount of technical information given, but enough to hold the interest; it is quite scene specific and most importantly doesn't feel scripted, for a one man show this is pretty darn good.

Next up is Adventures in Film Making, a fifteen minute making of segment with interviews form the principle cast and crew. Fair information given, plenty of behind the scenes work and little padding. Perhaps a little too self congratulatory but short enough not to labour the point.

Next up is a Selected B-Roll, basically behind the scene footage of setting up and shooting but without the interviews, only ten minutes and would have been better watching if it didn't concentrate on Williams buffooning about so much.

Finally there is a minute and a half theatrical trailer for the film. The Big White is a quirky black comedy that manages to entertain even if it is a bit too much like Fargo for its own good. As a package the DVD has an excellent picture average sound and only lacklustre extras, but it should find a home without too much trouble.