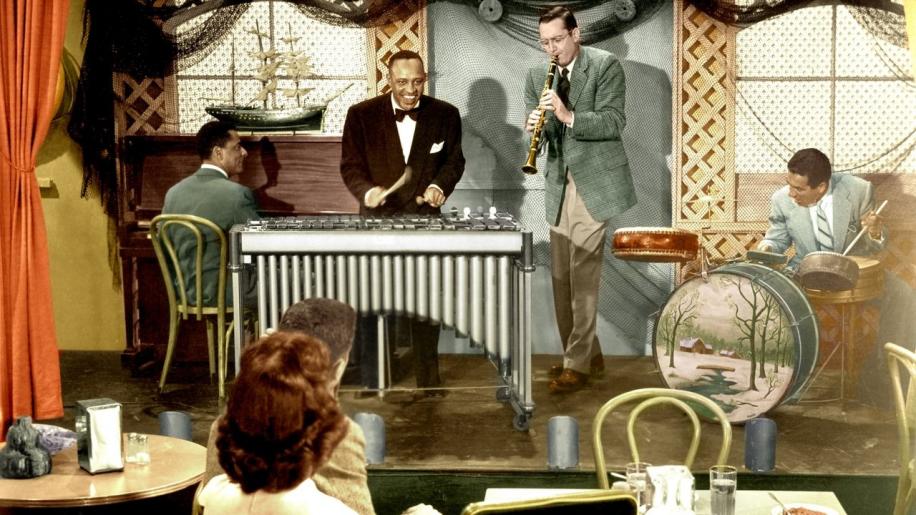 Released some ten years before I was born, I've never had the pleasure of seeing this film at the cinema. When I watched the film for review purposes on my front projection system at home, it was in the 1.33:1 aspect ratio with black bars on either side. Imagine my disappointment then when I found out this film was actually made in the 1.85:1 ratio (source - IMDB) and should have all but filled my screen. In all honesty, not knowing was probably the best thing. Now I know that it's been cropped and there are bits missing of the sides, I'm a little disappointed but not majorly upset. It seems that what we have on this disc is the TV version of the film that has been panned and scanned.


But it's not all doom and gloom. For a film that's fifty three years old, the picture quality isn't half bad. Source material seems to be in very good condition as there are very few - if any - marks and scratches visible onscreen.

The print does seem a little faded though and there is a fair bit of video noise in the bright backgrounds.

During the one or two night scenes where Benny goes out on the roof to play his clarinet, some detail does disappear - even though it's obvious they've been shot in a studio.

But be honest, when was the last time you had to watch a film twice because the first time you didn't even notice the picture quality? I had to with this film - and it wasn't until I carried out my research for some history on the film that I found out it was in the wrong ratio, so wrapped up in the music was I... Supplied only with its original mono soundtrack, this film has probably never sounded so good since premiere night.

The people that cleaned the picture up for this release may have goofed up a little when selecting the wrong ratio, but they have worked miracles with the sound restoration side of things.


Being in mono, everything comes from the centre channel - but it never becomes muddled and both the dialogue and music is crystal clear with not a hint of the annoying hiss that can sometimes spoil films of this age.

The dynamic range of Goodman's clarinet is there in it's entirety throughout the whole range and for me, it was pretty much faultless.

As a movie purist, I'm glad the sound hasn't been tinkered with...though as a realist also, it would have been nice to have had some of those big band numbers in stereo... None - but the menus are animated and scored. This film was never going to fail in this reviewers hands. With every tune in this film on my IPod, it was a pleasure to see how they would have been played live in front of an audience. Of course, this film is just a representation of how it would have been - and by all accounts, not a very accurate one.

All fluffed up for 1950's audiences, Hollywood had a vision of how it wanted the world to see America - and this film certainly continues the trend of films like The Glen Miller Story by missing out all the bad parts and concentrating on what people wanted to see and hear. In this case, a happy bespectacled balding man playing the clarinet.

So while I mark the film for what it is - a piece of fiction - I also tip my 1940's trilby in it's direction for paying respect to one of the musical geniuses of the early twentieth century. Well worth a rental just to see what all the fuss was about.