The Beast Must Die DVD Review 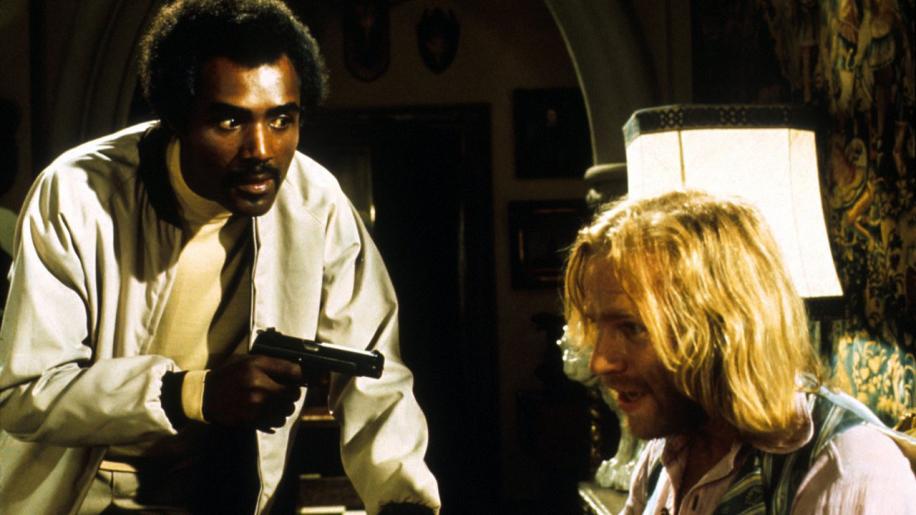 Well, I have several versions of this film - an early R1, the version that was contained in the coffin-shaped Amicus Collection and the newer R2 standalone copy. Whilst the version released as part of the boxset features a print that is a little darker, I actually think that this is the better-looking of the bunch that I've seen, including an older R1 edition.

There has always been damage on this print. The version that used to keep cropping up UK TV years and years ago, which I have a recording of (but can't now watch because I no longer have a working VHS or Beta machine) used to have some annoying scene changes that dropped contrast quite glaringly, but the DVD incarnations have rectified this to a large degree. Plus, a lot of the pops and speckles have been filtered-out or removed, too. Grain is still noticeable against some backgrounds, and is more prevalent in certain shots than in others, but is kept to an un-distracting minimum. Of the damage that is still evident, there is a single white spot that travels north to south like a continuous single snowflake during one sequence and lasting for about two minutes, and there is yellow halo that crops up fairly frequently in the upper right hand portion of the image - but, again, let me stress that these are not too distracting. However, the scene change wobbles and the slight but noticeable undulation of the print at certain times are kind of irritating. But it is worth noting that I haven't seen a version of the film that omits these altogether.

Whilst the image is undoubtedly soft, there is still a lot of detail on offer. This cropped 1.66:1 Amicus Collection disc again seems to fair better in this department, with scenes set in the surveillance room, the parlour and the dining room all exhibiting more delineation of objects further away. Close-ups, such as faces - Paul Foote, Pavel and Newcliffe, particularly - are very good for a film of this vintage. Whiskery Paul seems to have such an interesting face to begin with and Newcliffe's intensity is heightened by the enhanced clarity and Pavel's cool expressions come over all the more implacable. The eye-gouging and the torn throats also look a little clearer on the Amicus transfer. Colours across the board are not so hot, appearing washed-out and muted. There are some nice blues and reds, though, and the flames of the burning helicopter are suitably vivid.

But real downside of all the prints, but especially the Amicus Collection one, is that the image is often incredibly dark indeed. The night-time chase of the beast, whilst Newcliffe is airborne, is pretty awful to be honest, with only the barest details possible to make out on the ground. Of course, you could always argue that the original image was deliberately darkened so that we couldn't see the wolf too clearly, and I would generally concur with that, as it always seems to be when the beast is onscreen that the lights suddenly dim. Still, this is a reasonable transfer for a low-budget B-movie from 1974 and if I can still derive much pleasure from it then I'm sure you can. Now, here's the odd thing. This Amicus Collection version that Anchor Bay put out contains several of their notorious bugaboo surround mixes. Besides the original 2-channel mono track, the company have seen fit to grace this humble little film with not only a full Dolby Digital 5.1 option, but also a DTS 5.1 mix as well! I've commented many times over the years about these rather lamentable remixes, but I have to say that with The Beast Must Die, I have actually found one of these bogus tracks that I quite like. Yeah, I know ... there are purists tearing their hair out right now - but the surround mixes supplied here do actually add a fair bit of atmosphere and dynamism to the film. The most noticeable thing about either the DD or the DTS tracks is that they are considerably louder and much fuller, more rounded than the original track. But what they don't do that so many of Anchor Bay's bogus surround mixes do is come over with ludicrously added-on effects or major lip-synch problems. In fact, both tracks sound very clean, tight and respectful. One thing that neither of them does, though, is supply any decent surround. The rears certainly throw out some ambience, but they are really only called upon to boost the score, which they do with considerable aplomb.

Having listened to all three several times over the last couple of years, I have to admit that I tend to snap on the DTS track. This is because the film gets projected around the room just so much more and without any hideous-sounding aural fallacies or outlandishly booming voices, effects or music. For instance, check out the atmospheric difference between the three tracks that is made to the thudding heartbeat that Pavel's microphone picks up near the start. The DTS is a distinct winner in my book. But even the original track is terrifically reproduced here. Dialogue is always clear and crisp - especially Lockhart's often snarled or sneered lines. Douglas Gamley's funky music is insistent and buoyant and the frequent gunshots have weight and impact to them, even if steerage around the set-up isn't exactly the best. The whirling rotor-blades of the helicopter sound good during a front to back overhead sweep and the tussle in the barn is full of shrill barking, collapsing timbers and screaming - which all sound well integrated in any mix, but more aggressive in the DTS. Where the surround tracks perhaps missed an opportunity is when, first of all, the awe is thrown at Newcliffe and, secondly, the arrow is fired at him. Both occasions would have benefited from some proper rear-support, considering that both the axe and the arrow are thrown and fired from behind us. So, if you are going to go to the trouble of remixing an old track into surround in the first place, moments such as these would be the things to capitalise on.

So, if you want a nice choice of tracks, then the Anchor Bay Amicus Collection version is the one to go for. That score in vibrant DTS ... wacka-wacka-wacka! There are several versions of this film available on disc. The older R1 and the newer R2 standalones feature nothing. But the edition culled from the R2 Amicus boxset actually boasts a commentary from the director Paul Annett, a brief making of and a stills gallery. One of the newer R1 releases features much the same.

The commentary, prompted by Jonathon Southcott, is a great and highly detailed track featuring a fair amount of anecdote and production trivia. Annett recalls the cast and the filming very clearly and supplies a wealth of background material on his main players - such as his first meeting with Peter Cushing, whilst in a trailer with Vincent Price on the production of another movie, and his somewhat sinister “dislike” of coffee from a machine. He enjoys the performances that he managed to get, citing very few difficulties with the notoriously awkward Charles Gray, Michael Gambon and Lockhart, himself. There's lots of frank and amusing tales regarding the egocentric Milton Subotsky, though, and Annett laughs as he recalls how the irascible producer maintained that he had “saved” the troubled film from disaster with his own “miracle” editing. Of course, the dog that plays the monster, Sultan, gets plenty of airtime and both Annett and Southcott seem impressed by what was achieved with the mediocre budget that the film had been able to procure. Some cuts and alternative takes are mentioned, such as the eyeball that was originally seen hanging down Diffring's face, but Annett seems justifiably pleased with his work here on Amicus' last horror film. The infamous Werewolf Break is duly covered with lots of regret on Annett's behalf that he couldn't fight Subotsky's gimmick off the finished picture, but he acknowledges that this, in no small measure, has played a part in ensuring the movie's notoriety. The idea that Shirley Bassey has been intended to play Caroline at one stage is a really eyebrow-raising one. Apparently, it was Lockhart who vetoed the notion as he was insistent that Marlene Clarke get the role. Another interesting thing about this commentary is the amount of noise that takes place during it - rumbles, mike-bashes and heavy dragging sounds - almost as though the two are conversing in a building site. Oh, and in a first that I have come across, the pair even go on discussing the film for a good couple of minutes after the film has actually ended, the screen lit only by that wolf's head from the Werewolf Break that flickers away almost subliminally.

Overall, this is a great and very interesting track.

Next up is a mini-documentary, lasting roughly thirteen minutes, that is, essentially, just a recent interview with Paul Annett, interspersed with many clips and stills from the film. Actually, this is still quite good fun and would have been pretty informative, too, if most of the facts recalled here hadn't already been covered in the commentary. Still, this is nice enough little feature, even going so far as to show, via a split-screen, how Annett's original version would have looked if Subotsky's Werewolf Break hadn't made the final cut.

Film notes and biographies round off the extras in a reasonably thorough manner. Cheesy, gimmicky and riddled with plot holes, The Beast Must Die is still excellent value and truly unique horror film. I have put forward a comprehensive argument to reinforce its position as one of the pivotal turning points for the werewolf genre and, naturally, indulged in a festival of my own infatuation for such a neglected gem. Now, having presented you with the evidence ... you must decide if the film is a classic or not. As far as I am concerned it is a marvellous and often inspired genre crossbreed - whodunit mystery caper with action and horror - and features a premise that is rock-solid and irresistible. Paul Annett did a fine job under the tight restrictions and interference from Milton Subotsky, but the cleverest thing of all that the film leaves eager for more - both in answers and action. The feeling I always get is that this is just the tip of the iceberg and I long to find out more. Maybe I'll just have to stick with my own unofficial screenplay until some enterprising producer picks up the rights and, on that topic, if there are any film producers, distributors or studios interested, I am serious about a remake for this movie. This story has legs ... four of them.

As a DVD, until an HD or BD version surfaces - I can hope, can't I? - I would advise going for the Amicus Collection which, in fact, is releasing another version of the film in October 2007, in a R1 3-disc boxset along with And Now The Screaming Starts and Asylum. The transfer seems a little better, you get a choice of audio options, some decent extras and, of course, four other films into the bargain, including the afore-mentioned two. So, don't fall for the party-line on this movie and give it a whirl, for here the superstitions of the Middle Ages were flung into the present day and the attitudes towards this screen monster were irrevocably altered.