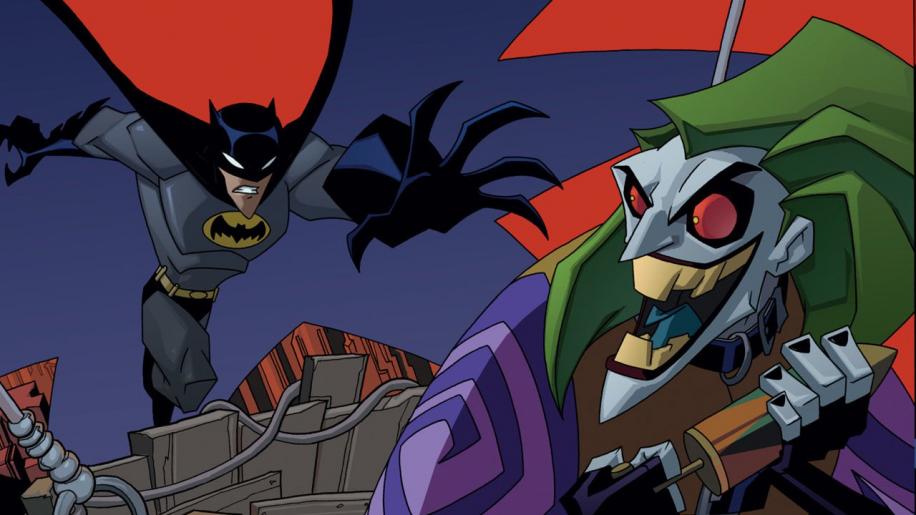 The Batman is presented with its original full screen 1.33:1 aspect and the image achieved is absolutely scintillating. This is one colourful show, folks, and the transfer does it justice with incredibly bold primaries, rich shading and thick, deep blacks. Look at the headlights of the Batmobile and the strobe-like effect of the streetlights flashing past - revealing an exceptional contrast balance. The screen positively throbs colour - and it does so without smearing, bleeding or any trace of chroma-shift at all, which is quite a feat considering the sheer depth of the palette. The level of detail is incredible, too.. Dark corners hold myriad secrets, the backgrounds are vividly rendered and the animators ensure that the full image is utilised with action spinning in from every corner. And, speaking of action, the fast, frenetic fight sequences are wonderfully captured with every kick, punch, dive, leap and muscle-packed manoeuvre rendered with an astoundingly vivid clarity.

Edges are perfectly delineated and there is no digital noise or print damage to speak of. The deep colours do not betray any artifacting or compression defects and the image is constantly rock steady and a joy to watch. This was viewed on both 44 and 32 inch screens and the result was immensely satisfying with either. A grand visual experience. Thumbs up. This show really could have done with a full 5.1 mix. But all we get here is the original Dolby Digital 2.0 stereo track that accompanied its original TV run. However, the sound is still crystal clear and superbly steered across the front with some seriously enjoyable depth and bombast. The bass level is pretty deep and the design is quite complex, with many effects flitting about in the mix. Voices are sharply presented and the score by Thomas Chase Jones - and The Edge - always comes across with gusto. Joker's voice (by Kevin Michael Richardson) is deliciously insidious enough to get beneath your skull, and the many bone-shaking impacts posses a convincing weight that jostles splendidly across the front soundscape. Very impressive if you boost it up with some amp-fiddling. So, quite a satisfying track that adds immeasurably to the fun of the show. Well, there really isn't much on offer here, folks. And the emphasis of what is here is mainly for the kids.

We get a mini-featurette called New Look, New Direction, New Knight (5.42 mins) which is a very brief look at the creation of this new series. Nothing too in-depth, but the anime-approach and glossy style is covered, as is the revamped design for the characters and the city of Gotham. We meet Duane Capizzi (Supervising Producer) and the guy behind it all, Jeff Matsuda, among others as they give us tiny insight into the production. But it is nice to hear them clarify that this is the beginning of Year 3, and that only after Batman has cleared Gotham of the relatively normal criminals do the freaky new breed begin to appear, with the Bat, as a consequence, being partly to blame.

Building The Batman (6.42 mins) is a pathetic commercial stunt for the Mattel Toy Company, with an animated Detective Yin probing the designers and the sculptors of the action figure range for information on the elusive vigilante. Okay for kids, I suppose, but still a fairly feeble effort.

Then there are the Gotham City PD Files (6.20 mins), which is an animated sequence depicting Batman hacking into Ellen Yin's computer files. He sits back while she narrates us through the guises, genesis and gadgets of his Season One adversaries.

There's some DVD-Rom gubbins to help you print your own Bat-badge and a roster of DC Trailers for Justice League Season 1 and Batman Beyond Season 1, and Batman Animated Season 4 and Superman Animated shows.

As I say, it's just for the kids, really, despite the show's appeal going way, way beyond all that. Well, folks, it's another winner. I know that I'm biased, but chances are that if you're reading this in the first place, then you are already converted to the varied exploits of the Caped Crusader. The Bat is back again and he's just as exciting as ever. Long may his reign continue.

The DVD is light on extras, but who cares when the show is presented so fabulously. Well recommended.