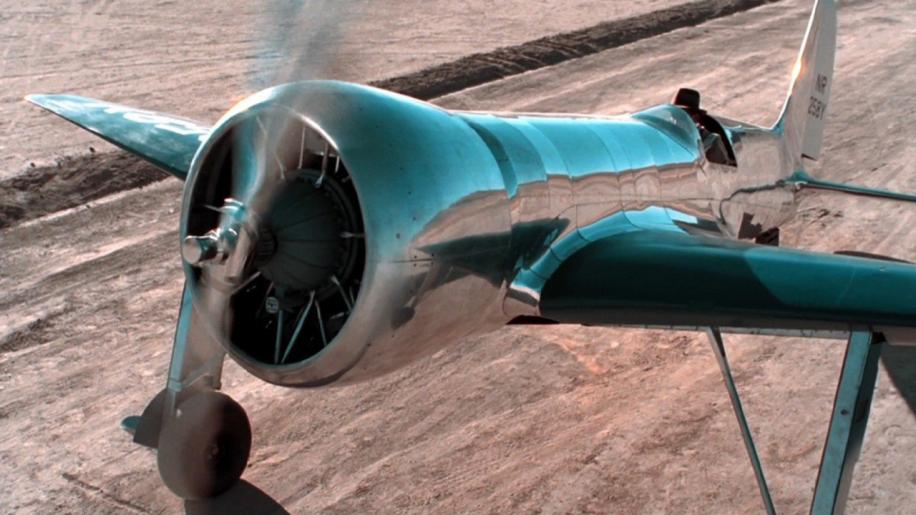 The Aviator is presented in a suitably broad and sumptuous 2.35:1 aspect ratio anamorphically enhanced transfer that makes it look magnificent. The detail is exceptional, whether during the grand party scenes, the dramatic aerial sequences, or the intimate facial studies. There is almost no edge enhancement present and the picture is completely grain-free, irrespective of the choice of shots, or time of day. The colour scheme is broad and never less than accurately represented with vivid and solid, realistic colours. The black levels are also good, with deep and solid shadows. It is a brand spanking new transfer so, as you would only expect from such a recent movie, it is completely devoid of any damage or defects, and overall it is a brilliant effort.

The main audio track is a powerful Dolby Digital 5.1 mix that sounds absolutely fantastic. Unfortunately, I can't help but wonder whether a DTS track would have really been the icing on the cake. Still, it is a superb track that presents the vocals prominently and directionally through the frontal array, with excellent soundtrack support mostly through the rears. The score is moving and penetrating, sweeping you up in the proceedings and engulfing you in the epic scale of this voyage of a movie. There are also plenty of effects on offer, whether the rumbling engines of the aeroplanes or the thunderous crash sequences, and they provide for plenty of brooding bass. It is a fantastic track - a benchmark Dolby 5.1 offering - which makes it easily comparable to some decent DTS efforts, but I guess we will never know whether that extra track would have been worth it.

First up there is a Feature Length Audio Commentary with Director, Martin Scorsese, Editor Thelma Schoonmaker and Producer Michael Mann. Although recorded separately, and not in conversation, it is still nice to hear not only from the master himself, but also from his partner in crime, Thelma (who worked on all of his films), and even get a bit of Michael Mann, another great director - behind Heat and, more recently Collateral - thrown into the mix. Scorsese contributes the most - talking twenty to the dozen - and at times needs to be paused in order for his comments to be digested. He is also slightly erratic in his discussion, jumping from idea to idea, but still providing a wealth of background into the production and, primarily, into the man himself. Schoonmaker and Mann aren't as prominent, and tend to talk more generally about the reception of the movie rather than its production - although they do occasionally offer some revelatory points about the on-screen action. Mann himself was originally slated to direct the movie, so it is great to have his input here on the track. It is an informative - and heavy-going - track that should be digested in segments but is well worth the time and effort.

On the second disc we get the rest of the extras. There is a single Deleted Scene: Howard Tells Ava about His Car Accident. Running at ninety seconds in length it is merely an extension to an existing scene, although it does reveal an interesting piece of Hughes' history.A Life Without Limit: The Making of The Aviator runs at eleven minutes and features contributions from all of the main cast members - DiCaprio, Beckinsale and Blanchett, along with the director, Martin Scorsese. It has a little too much film footage, but thankfully splices in a considerable amount of behind the scenes set footage and some nice historical stills. The crew members credit DiCaprio's embracing of the character, and all of his fellow cast members - including even Alec Baldwin - pop up to praise his acting skills. They then dissect all of the main characters in turn, talking about the intricacies of the different relationships in Hughes' life. We get a brief glimpse of Gwen Stefani in interview, along with a nice anecdote of how Scorsese came across her. Although ludicrously self-praising, it is a nice featurette and well worth your time.

The Role of Howard Hughes in Aviation History is a fourteen minute featurette focussing on the reality behind Hughes' contributions towards the aviation industry. We get real pilots commenting on how much is owed to Hughes' pioneering endeavours, along with a brief history of the development of his interest in, and love of, aviation. DiCaprio gives you a little background into Hughes' life - and there is a considerable amount of information that fills in the gaps in the movie. It is a nice documentary because you gain enough facts to be able to compare it to the story told in the movie, seeing that they stuck quite closely to the truth. There is also a little bit of old newsreel footage and interview footage with the real Howard Hughes, which is a tremendous gem to come across.

Modern Marvels: Howard Hughes, A History Channel Documentary runs at forty-three minutes in length and is slightly more gimmicky, with an irritating voice-over, but is extremely informative. It charts his life from birth to death, explaining his interest in building and modifying things even during his childhood, and his move into Hollywood and the aviation industry. We get even more classic footage here, including stills from his movies, shots of his memorable test flights and a brief glimpse at his Government investigation and his mammoth Spruce Goose flight. Although hearing the same story several times is getting a little tedious now, there are some interesting new facts to hear about here, but I would recommend not watching all the documentaries sequentially.

The Affliction of Howard Hughes - An Obsessive-Compulsive Disorder, is a fourteen minute featurette that takes a much more detailed look at Hughes OCD problems, something only briefly touched upon in the previous material. DiCaprio pops up again to talk about the great man and his damaging disorder. Medical experts contribute some interesting background information into OCD and DiCaprio explains how he spent some time with a real obsessive-compulsive to learn about it - and there is even some poignant interview footage with several sufferers. Apparently one in fifty people have this disorder, to varying degrees. This is a fascinating documentary that is possibly the most interesting and important feature on this extras disc.

There is also an OCD Panel Discussion with Leonardo DiCaprio, Martin Scorsese and Howard Hughes' widow, Terry Moore. This runs at fifteen minutes in length and was recorded live last Christmas. Because it is live, the sound is occasionally distorted and poor, but it is still interesting to hear the discussion of the subject, which features several interesting revelations about Hughes' life and his illness. More importantly it posits the real method acting ideology, talking about how the brain of an actor can actually start behaving like the brain of the obsessive-compulsive he is portraying if they try hard enough. DiCaprio regales - often amusingly - some anecdotes about his strange behaviour on set and how, if he let it, it could easily take over him. Scorsese talks about the specific shots he did to capture the disorder and his widow contributes a little towards the end about her experiences of his problems. This is a very revealing discussion that is well worth your time.

An Evening with Leonardo DiCaprio and Alan Alda is a thirty minute featurette with the two aforementioned stars talking live about the production. Alda talks about his shock over the acclaim he received for his portrayal and DiCaprio discusses, in detail, how he was captivated by Howard Hughes at a young age. They chat about playing the parts and what happens when you are engulfed by your own portrayal of a character. They praise Scorsese and his intricate ideas about directing. There are also some nice anecdotes about the casting decisions and filming some of the scenes, and it is a warm, lively discussion that is perhaps only slightly less informative than the other featurettes.

The Visual Effects of The Aviator is a twelve minute featurette that looks exclusively at the flight and crash sequences, dissecting them with behind the scenes and comparison footage, along with green-screen and effects shots. It is almost a shame to see how much of the movie is actually forged using CGI because it looks so good that you would be pushed to figure it all out without this revelatory featurette. This is another informative but - be warned - extremely revelatory extra.

Constructing the Aviator: The Work of Dante Ferretti, is a short, five minute featurette that looks at the production designer, Dante Ferretti, and his work on the film. It features some nice behind the scenes footage, production stills and concept art, and plenty of interview footage with the crew. Ferretti talks about how he has worked with Scorsese on six of his movies and what he had to do to bring The Aviator to life. The fact that they built a full-size 'Spruce Goose' is amazing, and some of the in-depth exploration of the sets highlights the sheer level of detail that the movie maintains.

Costuming The Aviator: The Work of Sandy Powell is another brief featurette, running at a mere three minute, and quickly looking at the costumes designed, featuring interviews with the Costume Designer Sandy Powell, Cate Blanchett, Kate Beckinsale and yet more DiCaprio, along with concept art for the designs, all illustrated by the relevant footage from the movie.

The Age of Glamour: The Hair and Makeup of The Aviator takes an eight minute look at the hairstyle and makeup on he movie, but comes across as an extended TV ad for Max Factor. They justify this by tracing the history of Max Factor, who used many of the real stars in this movie to advertise the makeup.

Scoring The Aviator: The Work of Howard Shore is a seven minute featurette showcasing the score and featuring interviews with the composer, along with behind the scenes footage of the orchestra in action. Shore talks about how he researched the style of the scores from movies of the relevant era and how he used this basic concept as the foundation for his score to The Aviator. We hear how he got together with Scorsese to discuss the score whilst watching the movie, and his contributions to key aspects of the film's storytelling. It is a tremendous score that is easily worth making a featurette about.

The Wainwright Family - Loudon, Rufus and Martha is a five minute look at the Wainwrights, who did one of the band performances in the movie. I don't know whether they are quite worthy of a featurette unto their own, but it is quite interesting to hear about the different eras that each generation of singer came from and how they brought it all together to create the right effect.

There is also a brief Aviator Soundtrack spot, which runs at a mere twenty seconds and is just a worthless TV ad.

Finally we get a Stills Gallery with about seventy pictures from the movie shown in a slideshow format with the option to skip manually. There are some nice behind the scenes and on-set shots, along with some publicity stills, and it is the cherry on top of this magnificent wealth of extra material.

The Aviator is yet another magnificent Scorsese movie, featuring an astounding performance by Leonardo DiCaprio, who stands out even amidst an amazing supporting cast. It is a respectful testament to the real Howard Hughes, handled adroitly, shot breathtakingly and superbly realised. The technical specifications reflect the splendour of the material, with outstanding picture quality and a benchmark Dolby 5.1 track, and there is simply nothing more you would need to know about the production that is not covered in the fantastic extra features. I cannot recommend this movie or this release enough.