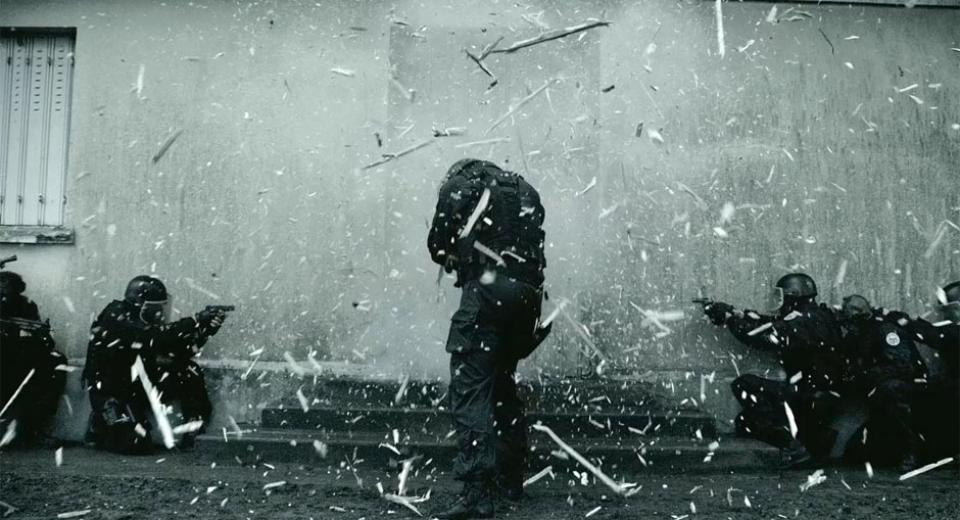 Studio Canal's Region B locked impressive AVC encode comes in at 1.85:1 and 1080p. It's terrifically stylistic, drawing on the methods of Paul Greengrass and Tony Scott heavily. This equates to a large amount of shaky-cam handheld imagery. Not a bad thing in my view, but I concede that on larger displays it can become quite jarring. I'm happy to say that here, it's used with consideration, and though some may still find it too much, it's by no means nausea inducing.

The image is almost entirely devoid of any colour at all. This is a stylistic choice from little known director Julien Leclerq, and one that was intended to bring a gritty and visceral sense to the movie. As I mentioned in my review, it's successful to a point. The result of this approach does draw parallels with the blood draining from your face as the gravity of the situation unfolds, but I did find myself on a couple of occasions desperately longing for a splash of colour. Skin tones look washed out as you would expect, and the palette is generally on the cold side, looking like a desaturated blue hue to the print.

Contrast is very heavy, and this does mean a slight lack of depth to the image at times. This is not helped by the heavy use of grain too, which for all intents and purposes is certainly not over the top, but it's very noticeable on the image. I didn't find this offensive at all, as I felt it fit with the whole narrative and structure of the movie. Fine object detail is good, and there's no signs of any edge enhancement, but shadow detail leaves a lot to be desired. Overall, a gritty picture for a gritty and visceral movie. Decent. The DTS-HD Master audio track is incredibly good. It's intuitive, subtle, and very clever. Using the full surround array to good effect without seeming gratuitous, and with high frequency representation impeccable throughout, there's little to complain about here at all. Sound effects and foley are authentic and well designed. Dialogue is crisp and clear, and never for a moment did I struggle to keep up. The Subtitles are excellent too. Music is intense and uses the throaty sound of the cello staccato very well. It elevates the scenes with a sense of foreboding.

However, it's really the sound design and mixing that stand head and shoulders above all else in The Assault. Some fine moments allow the sound design and mixing team to really put their game up, like the scene in which Thierry is on the firing range, and slowly puts on his ear defenders, and the entire soundscape of the movie is changed. We hear Thierry's breathing as though from his perspective, and hear how he holds his breath just before each shot.

Gunfire crackles and explosions thud with a sense of reallism so often not present in movies these days - almost as though the LFE has to do ten laps worth if an explosion is to be deemed fitting. Not here. Attention is paid to detail rather than volume and bass. That being said, there's plenty to give your system a work out in the frantic and bloody final scene.

It's absolutely beautifully constructed, and without a doubt sets an audio benchmark for conveying the emotion of a character so excellently, and a brings a sense of visceral realism to the more violent scenes. The whole time through the movie, the audio is constantly lending a sense of realism to everything, yet without having to be bombastic and shout about it. A deft hand was put to this audio presentation, and unsurprisingly, the sound team consisted of as many crew as the Camera and Electrical team - quite an accomplishment indeed by todays standards, and I applaud it. Only a trailer on show. Barely really earns the solitary point I've awarded it. The Assault is a hard hitting and gritty thriller based on real events revolving around the hijacking of an Air France plane in Algeria. Julien Leclercq, known only for indie action thriller Chrysalis, cleverly constructs his telling of events without jumping head first into the political undercurrent that surrounded the incident. Preferring to keep his narrative fast paced and focussed on the events themselves, Leclercq builds the suspense from start to finish, constantly turning up the heat on a pressure-cooker situation involving 227 passengers and crew on board. Culminating in a bloody and brutal assault let by the French SWAT team, it's a visceral and edge-of-your-seat white knuckle ride from start to finish.

The Blu-ray package is solid, with heavily stylistic direction, reminiscent of Paul Greengrass, and an audio resentation that explores the creative boundaries on sound design without breaking away from reality. With no extras at all bar the theatrical trailer being the only real let down,The Assault is perhaps a slightly harrowing cinema experience due to it's content being based on true events, but one that is without a doubt worth your time. If not to purchase, at least to rent. Recommended.