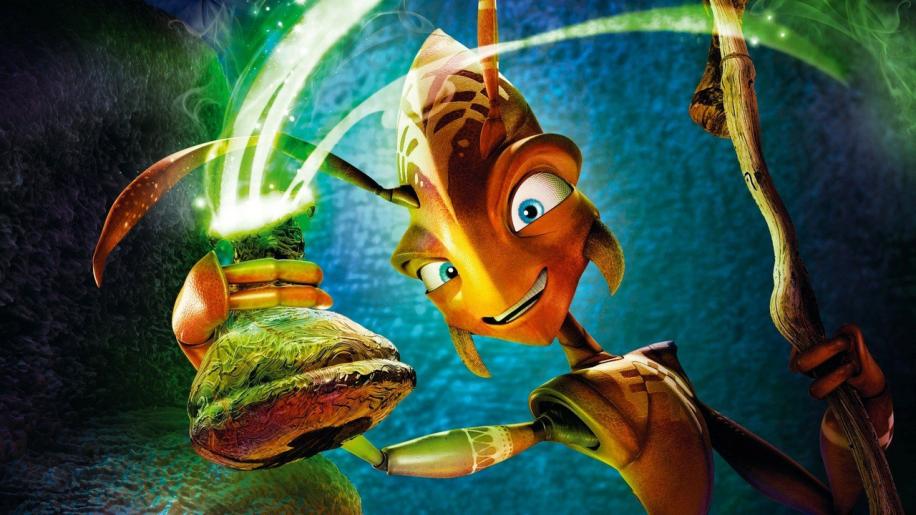 Without looking too polished, The Ant Bully's anamorphic 1.78:1 transfer should still please the non-too-discerning small people who will make up the film's core audience. Colours, for much of the film, are bright and warm, yet whenever the action takes place above ground, there is a tendency to look too soft and muted, almost as though the sun has faded the lustre from the picture. However, the underground antics - such as the flooding of the colony, Lucas's descent into the new world or Zog's magical creativity in his chamber - are dealt with in a much more vibrant and dazzling style.

Edges, to my eyes, aren't quite as sharp as they might be and backgrounds can seem a little too dull, making the image appear vastly inferior to the likes of the CG big-hitters. That said, though, close-ups can still be very pleasing to view with lots of varied hues for the environments and the insect characters making the screen an interesting, though hardly groundbreaking, canvas. Lucas, however, is a very blandly defined set of pixels (as are all the humans, to be honest), totally lacking in life and vitality when compared the richly-detailed ant population. The disc wins when exhibiting the different shades, patterns and textures of the creatures and there are some nice effects with the likes of reflections upon their shells and the depth of their eyes. The disc makes it quite plain to see just what the animators preferred working on - and it certainly wasn't their own species. Hardly benefiting from its DD 5.1 surround mix, The Ant Bully is extremely family-friendly in the sound department. Things do zip around the set-up, but they do so as if the audio engineer has a finger pressed firmly to his lips. The resulting dynamic seems hollow and lacking in any strength or aggression. Don't get me wrong, though - the mix is still enjoyable and atmosphere created is one of fun and activity ... it just doesn't do it with any conviction.

Voices are clear enough and John Debney's score comes across well, with warmth and a good enveloping design. But the directionality, whilst nicely spread around the speakers, feels toned down. Nothing to disturb the neighbours then. The Ant Bully doesn't fare too badly in the extras department, though the emphasis is mainly on keeping the kids happy. And there's nothing wrong with that.

It Takes A Colony (16.32 mins) is a snappy little making of that is purely intended for the little ones in your nest to enjoy. Featuring the director and his animators and a couple of the voice cast (though not the big stars, unsurprisingly) being interviewed by the insectoid characters from the movie itself, this fact-light behind-the-scenes expose gets by on pure cutesy-value. Everything is in small and easily digestible chunks of primary school level information, dished out in an all-smiles fashion that may be juvenile but is more than enough to entertain and educate young fans without going too far into the technical side.

Then we have seven Animated Shorts featuring the characters from the film in further bite-sized adventures. All are reasonably fun, but the best is one that features a terrific spider that is actually more frightening than old Shelob from Return Of The King. Well, almost. With a Play All option these shorts last for 8 mins.

Ant Habitat (1.17 mins) is a screensaver that just shows us an animated ant farm. Now, with this playing on a continuous loop, the effect is surprisingly hypnotic. Mind you, even if you shut this off after a minute of watching the little critters going about their business, that is still a lot longer than the ants in my ant farm lasted! Despite being a particularly sweet last supper, a jam-landslide was not a very pleasant way for my microscopic mob to go.

Next up are a collection of Additional Scenes lasting 11.20 mins. There are some quite cool little moments on show here, but there is nothing spectacular enough to enhance the finished movie all that much. Some of these are not quite completed and have either raw CG without filled-in backgrounds, or are actually rough-drawn black-and-white sketches only very loosely animated.

And finally there is a Theatrical Trailer which is a pretty neat variation on the norm in that it is actually a series of insect auditions for the film from an assortment of crawlies.

It is not a bad little set of bonuses for a lesser release, and it is nice to see that they all aimed at the kids. Good, but throwaway fun. The Ant Bully may only ever be a little stop-gap before the next mighty Pixar or Dreamworks release, but it has a cheerful disposition and a moral that is worth putting across. Definitely one that the grownups of the house won't be sneaking on the DVD player when the kids have gone to bed, but a nice enough stocking-filler come Christmas.

AV-wise, this standard DVD won't win any awards, but the overall package, although slight and aimed squarely at children has plenty going for it.