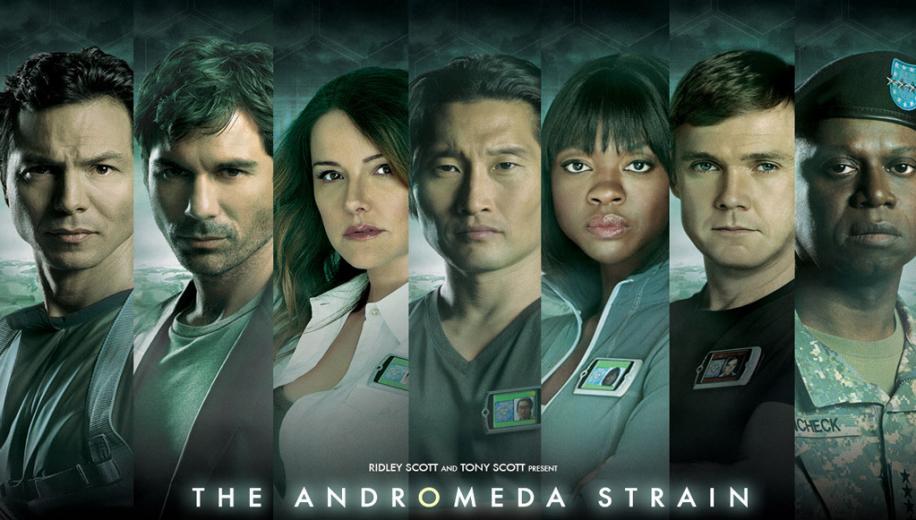 The Andromeda Strain is presented in a TV mini-series friendly aspect ratio of 1.78.1. And to be honest, this disc is just about as good standard definition offerings get these days.
Shot on High Definition Arriflex D20 cameras the same way that they make Hollywood blockbusters, every frame is pin sharp and very highly detailed.

Blacks are solid and hold up well - indoor and night scenes are just as detailed and revealing as the outdoor and well lit ones. Edge enhancement is totally absent throughout which is a bonus as there are several landscape shots that could have been totally ruined had it reared its head

If I do have a minor gripe with the picture quality, it's that the colours are muted and fairly dull throughout the production. It does add to the mood of the piece - but destroys flesh tones. On more than one occasion, the stars of the show appear to have been given a tan removal service in post production.
However, as I said earlier, about as good as it gets for standard definition fare at the moment. Universal have made the right choice in splitting the feature over two discs and the lack of compression artefacts can only be a result of that decision. Nice one. Showing it's American roots, The Andromeda Strain has been given the full big screen Dolby Digital 5.1 treatment.

But - lets not all get excited. It's a bit of a damp squib - IF you compare to modern day action blockbusters. But, as a made for TV mini series, it's adequate. It does say on the case Dolby Digital 5.1 - indeed, pressing the info button on my Onkyo DVD player confirms it is. But, as with most TV productions given the digital soundtrack treatment, it's all anchored to the front three channels. There is the odd moment when a sound engineer throws caution to the wind and will bring the odd helicopter from the rear to the front of the sound stage - but those moments are few and far between.

The .1 channel is noticeable by it's absence and it appears that the nice chaps at Universal have toned down the bass rumble to avoid upsetting the neighbours. I lost count of the lost opportunities to test the foundations of my house - the first one in the opening act when the satellite crashes - and each and every one of them was missed.
On the plus side, dialogue is spot on and anchored to the centre channel. I can't remember once having to rewind or ask my better half what was said. The score also takes advantage of the wide front stage and does add to the tension of the piece. Having been presented with two discs for this review, I was actually looking forward to a whole disc full of extras to trawl through - sadly that isn't the case here.

Here's what we do have...
Two Commentaries by the crew. There is one episode on each disc and each one has been blessed by it's own commentary. They are both very different but there is nothing here that you wouldn't have heard before. Loads of back slapping - particularly aimed in the direction of the director.
Visual effects breakdown. This is a short 15 minute piece that shows just about every scene that had a CGI effect in it - and how that particular scene was done. A commentary would have been helpful but all we get is the theme in the background.
Photo and design gallery contains 110 storyboard drawings and their respective scenes.
So - a bit thin on the extras front. I had some promotion material come with the disc that showed the menu for the second disc - on it, it had a Making Off documentary on it. Wonder what happened to that...? More of a re-visualisation of Michael Crichtons novel than a remake of the classic 1971 film, The Andromeda Strain is a half decent effort from the Scott brothers production team.

Boasting a top of the range American TV cast, large budget thanks to the brothers Scott and some decent direction, this may surprise one or two of you waiting to rip it to pieces (like I was...).

Being shown on British television for the first time in mid May, the two disc DVD version is a bit of a mixed bag. Picture quality is about as good as it gets for standard definition fare these days. There is a high definition version out there - and those of you with a Sky HD box can enjoy this version when it premiers in May.

Sound quality, while solid and accurate, is never going to shake the foundations of your viewing room. It does add to the suspense and drama though.

If you want to see the extras, you'll have to splash out on this DVD as they won't be shown on TV at the same time. Though be assured, you won't be missing out on much on the extras front if you don't...

My advice to you would be to wait for the mini series to be shown on TV first and then make up your own mind as to whether you want to see it again. I'm not 100% sure that it will hold out to multiple viewings - and I'll be waiting for the backlash from the Crichton/1971 original lovers on this one.
Brian dons flame-proof suit and exits stage left...