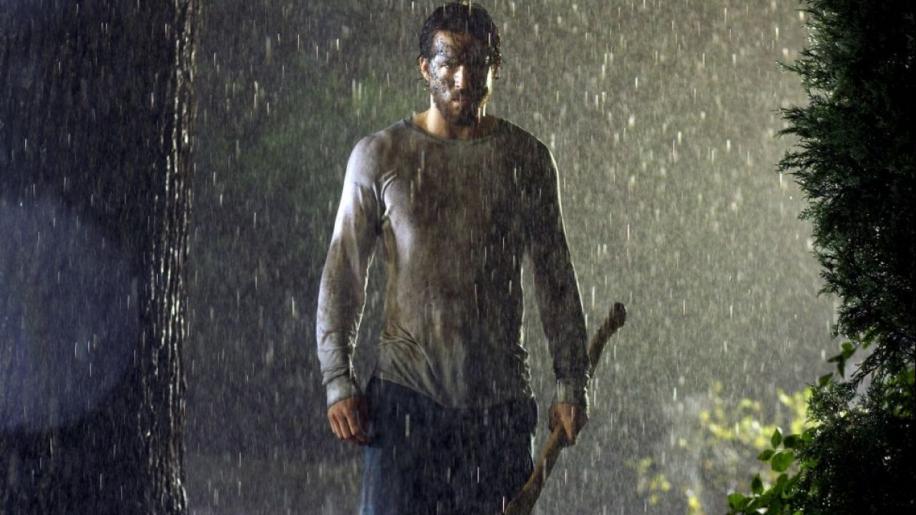 With an anamorphic, theatrically correct presentation of 2.35:1, this is a good transfer in general terms, but as this is a new movie, I'd have been very shocked and disappointed if it was anything but. Colours are bright and vivid, from the reds of George's shirt to the vivid greens of the grass, trees and countryside we see throughout and skin tones are spot on and natural, from the priest having a tanned complexion to Kathy being very pale in comparison. Not once did I notice any colour bleed occurring, nor did I spot any haloing. Black levels are dark and deep, which as the climatic scenes occur at night, is good - there's nothing worse than a washed out night scene. Detail is also good - we can see the lines under George's eyes when she hugs her daughter after a particularly traumatic episode - but this also reveals other issues, for instance we can see the edge of the contact lenses Reynolds wears occasionally. With no dust or scratches present on the print, no artifacting present either, this is a wonderful transfer.

Horror movies can live and die on the soundtrack, particularly on the scares. This is one of the better horror soundtracks that I've heard in a while, for starters, we have a very lively LFE channel - from the opening scene, we are fully aware of it's presence with a deep resonating boom in the shotgun blasts, but also through the bass line in the music. You'll certainly appreciate the LFE here, that's for sure. Dialogue is fine, although a tad quiet compared to certain scenes, but that's probably done to give them more impact into making you jump. Surrounds are utilised reasonably well, mostly during the more frantic scenes and again during the stingers. Overall, it's pretty effective but kudos for the LFE.

Starting off, we have 8 deleted scenes, which can be played separately or all together and with optional commentary, all the scenes are non-anamorphic and run for a total of 8 minutes. While they are fine as an extra, there's certainly no need for them to be in the movie as they add nothing. Supernatural Homicide is a 17 minute featurette outlining the original DeFeo murders that occurred in the house, which is interesting but doesn't give away too much information in allowing the viewer to gauge the truth, although it may whet the appetite for further investigation. The Source of Evil is a 26 minute making of featurette, which is mostly PR fluff material. They mention that the house is/was the most haunted one in America, which further tries to explain the atrocities that occurred there. You won't learn anything here, although the argument that psychological horrors over splatter-fests are the better horrors is probably true, but that's an individual taste thing. On-Set Peeks allows you to follow the white rabbit ala the Matrix, allowing you to see on-set takes of the scene you've just watched. There are 9 of these in total, but I'd probably argue that unless you are really interested in seeing on-set stuff, then there's nothing here for you. Rounding off the disk we have a photo gallery and about 15 trailers, although not one for this movie.

Well it's a remake but not a terrible one. I can't say if it's better or worse than the original as I haven't seen it since the 80's, but I will say that there is fun to be had here, even if, like the current trend of Hollywood horror, it's not scary in the slightest. On a personal note, I'd much rather they stop relying so heavily on stingers and add more horror or horrific material, but that may well just be me. Still, Reynolds is better here than Blade 3 (which wouldn't take much) and George may just be getting her cinematic break as she's certainly decent here. Not bad at all, but neither is it great.