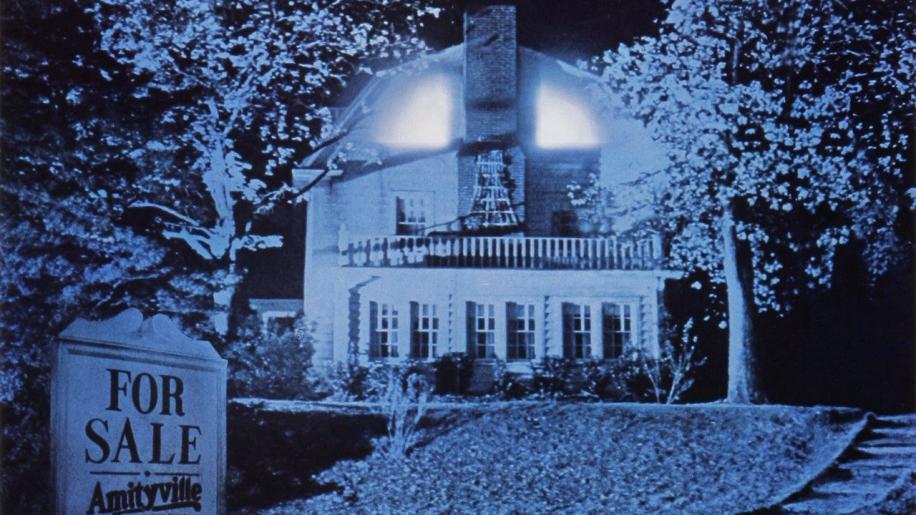 MGM have really made an effort with The Amityville Horror. The picture for a low budget 26 year old film is excellent. The film is quite a darkly shot picture with plenty of greys and blacks. The transfer handles them superbly with no artefacts or compression problems. Skin tones are clear and look very good especially as the film features quite a few close-ups of the actors. I could see no print damage and MGM's boast on the box of a new high definition transfer is well deserved.

Amityville II has a reasonable transfer, the picture is clear and the colours, especially the reds (of blood), are free of smearing. Amityville II again has plenty of dark scenes and the transfer handles them pretty good. I could see no artefacts and overall it's quite a nice transfer considering its age and low-ish budget. On side 2 is a pan and scan version but why bother?

Amityville 3D, although not in 3D is presented in its original 2:35:1 anamorphic presentation and for a low-ish budget film looks reasonably well. The blacks are well defined and only occasionally could I see some print damage. Personally at times, I felt the picture was a little 'misty' and unclear. This I think is the fault of the film being shown 'flat' after being made in 3D. The picture also tends to blur when there is a 3D effect on screen. However, the world's greatest digital transfer won't stop it being a pile of utter drivel. Again, on the other side of the disc is a pointless pan and scan version. Now this is where I am impressed. The film was originally shot with a mono soundtrack which is presented as a separate track on the DVD. MGM have recreated it in an outstanding 5.1 Dolby Digital track. Lalo Schrifin's haunting score sounds wonderful. It is a highly creepy and unsettling score and hearing it in full blown digital is quite unnerving. There are plenty of thunder cracks on the soundtrack and these are carefully passed around the surrounds. The LFE channel comes into play a few times in the movie, for some weather effects. One particular effect I enjoyed was a particular scene where Margot Kidder arrives home with shopping and out of sight you can hear James Brolin chopping up wood. You hear the effect before you even see the character and this is most impressive and very atmospheric.

Amityville II: The Possession is presented in mono. The dialogue, sound effects and music come cross well in the mix but it's a shame MGM didn't use the 5.1 sound which is available on the UK Region Free disc.

Amityville 3D has a 5.1 soundtrack which is clear and sounds pretty good. We get to hear the music in the front channels and dialogue is clear. The surrounds are used for effects and come across quite well. However, as the film is so boring the best sound effect will probably be the sound of you snoring and waking yourself up!! The respective documentary on the original film is interesting as it interviews Brolin and Kidder about the film's beginnings, shooting and aftermath. It is a shame that they were interviewed separately, as both are engaging and tell great stories about the film. Also included are some radio commercials and the original film's trailer. The film also contains a commentary and introduction by Hans Holzer, author and Amityville expert. Holzer tells you the 'facts' about the case and compares them to the film's events. He also shares other interesting facts to you and if you are generally interested in the real Amityville case, it's an engrossing commentary.

There are no extras at all on Parts two and three apart from the individual film's trailer on each disc.. MGM, however have saved the best until last. On the fourth disc, we are treated to two very extensive History channel documentaries based on the Defeo case and the haunting of the house. They both feature extensive interviews with plenty of people connected with the case including The Lutz family themselves. Finally we have a 'first look' at the remake which is a couple of minutes long and reveals very little. Let's hope MGM do a great documentary for the remake's DVD release in a few months.

Please note that the History Channel documentaries and the remake 'first look' are included as a second disc in the UK release along with the 'For God's Sake, get out' documentary.

The Amityville Horror box-set is a real bargain. There is a region 2 release by MGM for the first film, but for the sake of a couple of extra pounds you get two other films. Having said that, only the first movie is truly a quality piece of DVD production. I have always loved the original since seeing when I was a kid and with MGM's respectful re-mastering, it is an essential purchase.