A movie tie-in that isn't terrible. Is it possible, true believer? 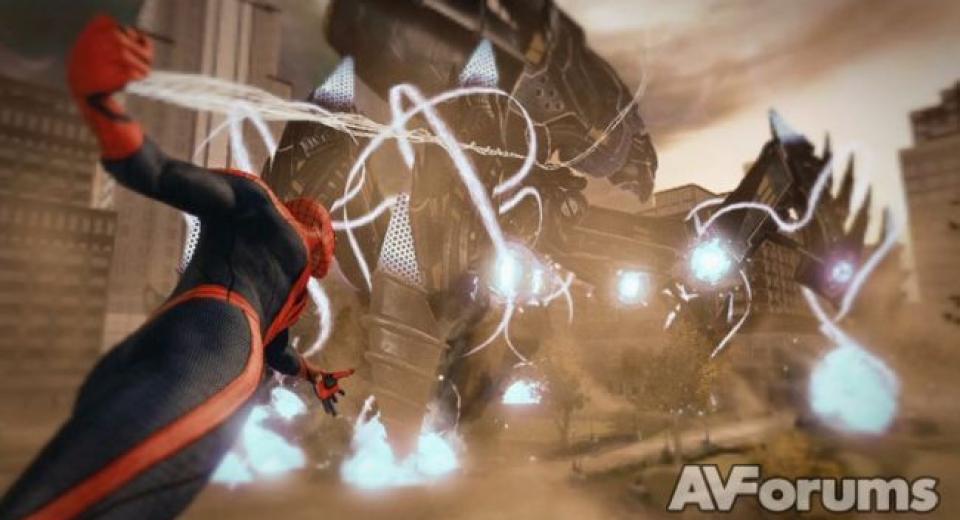 If such an award existed, The Amazing Spider-Man would be a genuine mid-year contender for Most Average Game of 2012. It’s fun - even thrilling at times - but much of the gameplay is derivative and as it wears on it becomes depressingly repetitive.
If you are the spoiler-sensitive type, it's worth noting that this game takes place shortly after the events of the film, and reveals many of the movie’s key plot points. I’ll avoid what I can in this review; suffice it to say that the virus that transforms Dr. Connors into the Lizard is spreading through Manhattan, and Spider-Man has to find a way to stop it.
The story clings doggedly to the periphery of the Spider-Man universe, offering dedicated fans little insight into the characters. None of the film’s actors reprise their roles, although the voice artists drafted in do a solid job. The ubiquitous Nolan North voices Alistair Smythe, the game’s main antagonist, and towards the end there’s a satisfying cameo from Stan Lee himself. TASM is a fully open-world Spider-Man game, which will be music to the ears of fans who have held out for a free-roaming web-swinging experience since 2004’s Spider-Man 2. Spidey’s splayed-limb, tumbling, gangly mid-air animations are silky smooth and give an exhilarating sense of freedom and pace. It’s one of the game’s key strengths, and remains a pleasure to look at throughout the ten to twelve hours of gameplay on offer.
But that’s part of the problem: it’s great to look at. From a gameplay perspective, it’s thoroughly over-simplified. Swinging around the city requires nothing more than holding down one button; Spidey’s webs don’t attach to walls, they effectively anchor him to thin air. There is no skill required at all, and therefore little reward.
In an effort to bolster Spidey’s options in this regard, Beenox have added Web Rush, which pauses the action, brings the view to the first person, and highlights positions Spider-Man can travel to directly. It could be argued that using Web Rush rather than the swing button is a more exciting way to get from A to B in Manhattan, but even used quickly it breaks the flow considerably.
The other key mechanic introduced for this game is Web Retreat, which causes Spider-Man to quickly swing away from a hairy situation to a safe distance. Although it works as intended, it reduces the threat in the game to almost zero and, like so much else in TASM, it smacks of a dumbed-down re-imagining of the recent Arkham games. In contrast to the ease with which the player can navigate Spidey on his web, wall-crawling can occasisionally leave the player hopelessly disoriented. Sometimes a panicky Web Retreat or simply trying to move around on a wall or ceiling can play havoc with the camera and leave the player lost as to which was is up, or, more problematically, where the enemies are. This isn't helped by the controls, which are sometimes equally confused, suddenly inverting temporarily for no apparent reason.
Missions can require Spider-Man to either tackle enemies head-on, or to take a more stealthy approach - and here the Batman mechanics are most noticable. Dropping down from above to quietly take out one or two unsuspecting henchmen at a time will feel familiar to anyone who has played the recent Dark Knight titles.
The out-and-out fighting sequences also take a similar approach to the Batman games, but without anywhere near the same level of fluidity. The Rocksteady titles require the player keeps to a strict rhythm of blows and dodges, while TASM is considerably more forgiving - the combo multiplier tends to accumulate until Spidey takes a hit, not until he misses a beat.
The bulk of the game’s missions take place indoors, rather than utilising the outdoor space offered by the open-world Manhattan setting. But the Spider-Man of TASM is at his best when he isn’t confined to small areas. Narrow corridors aren't as well suited to web-swinging and can feel limited and claustrophobic compared with the openness of the city.
Late on, control of Spider-Man is limited via a plot contrivance and a chase scene occurs. But here the game's mediocrity is exposed; both the player's lack of empathy for Spider-Man and the game's sub-standard level design become suddenly apparent. It's hard at that point not to be reminded of Portal 2, which late-on had its own comprable segment (albeit with no physical enemy giving chase), and managed to make many players flail marvellously. The game's bosses, while utterly robbed of personality, are actually quite good fun to take on. An early encounter with a giant robot in the city is particularly awe-inspiring and will give most players a really positive feeling for how the rest of the game might pan out. But as if to further underline the previously mentioned lack of commitment to telling an original and interesting story, confrontations with supervillains Rhino and Scorpion fall flat due to the decision to make them nothing more than personality-free roaring animals in half-human form.
The main missions are supplemented by side quests that pop up all around the city. There are a handful of more substantial tasks, but most of them are short activities that become repetitive fast. The muggings that Spidey can intervene in, for example, result in both hero and victim repeating the same few lines of dialogue every time - a minor gripe but it quickly becomes tedious. If I hear “Stay frosty!” one more time, I might scream.
To the game’s credit, the pages scattered around the city that unlock digital versions of landmark Spider-Man comics are a nice feature. Too often games include collectibles that have little or no relevance to the theme of the game, but the digital comics here are well worth a look.
So yes: To say TASM is anything more than competent is probably to exaggerate its qualities. But in a year that’s given us MiB: Alien Crisis and Doctor Who: The Eternity Clock, Spider-Man’s latest outing is a breath of fresh air in the world of tie-ins. It really shouldn’t be the case that an oversimplified swinging mechanic is the main selling point of a game, but somehow when its used as the glue that holds together a load of ‘borrowed’ ideas from other games, it kind of works. The Amazing Spider-Man isn’t one to rush out and buy but with so little else available right now, it might be worth a look.

The events of The Amazing Spider-Man game take place shortly after the end of the film, making it a veritable spoiler-fest. Swinging around the city and the Batman-lite fighting will provide enough entertainment to see most players through the campaign, but with repetitive side quests and an uninspired plot, TASM falls short of what it could have been.