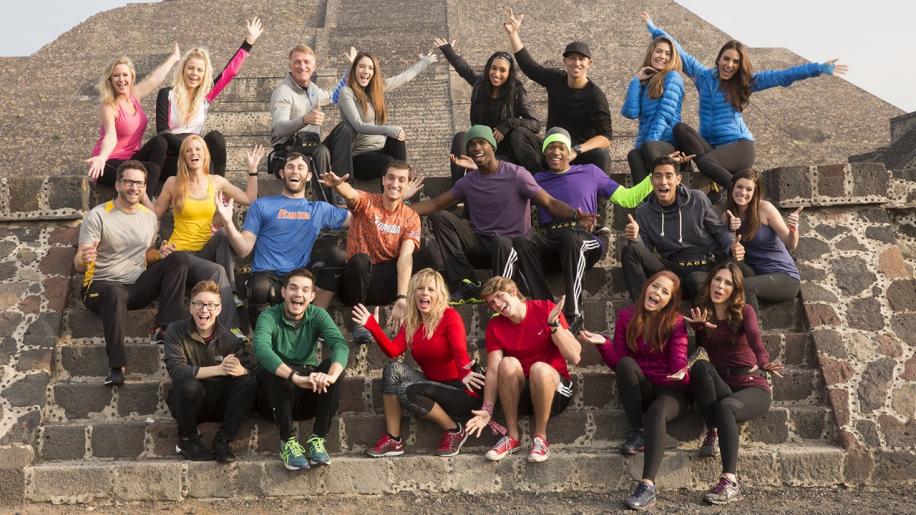 Coming at you in full screen 1.33:1, The Amazing Race is hardly going to set your visual world on fire, being a barely cleaned-up transfer from its original TV broadcast. It also clearly suffers from its digital makeover in a few instances, too. Whilst boasting some fine and strong colours, deep blacks and some fairly decent detail in close-ups, the discs betray their less-than-perfect source material with hazy landscapes, a whole heap of shimmering on bright surfaces, backgrounds and aerial views (Paris, for example, or the river rafting). Some shots are stippled with deep grain, too - though, for the most part, grain is nicely kept under control. Fast action suffers from compression problems, too and there is some loss of clarity on sideways panning.

Now, all this may sound pretty dismal - and if it was a feature film, it would be. But, to be fair, a lot of this is only a problem on really big screens and, even then, I don't think it would hamper enjoyment of the show in any major way at all, given the obvious limitation of the source. The Amazing Race has only a Dolby Digital 2.0 track that handles the material without any pizzazz, or vigour. The transfer is clear enough and copes well with the varying quality of volume evident throughout the season. Due to the nature of the show, there is a live outdoor vibe of raw sound produced through microphones attached to very active people, so the overall quality is justifiably all over the place. I must stress that dialogue can always be heard, though. There is a small of amount of distortion evident, but it is, in no way, harmful to the enjoyment of the show.

The show's big-time rip off theme tune comes through with a bit of vigour, though. The heavily touted Side Trips, as they are called, are actually ninety minutes of deleted and extended scenes that really only serve to show the teams shooting-the-breeze, or arguing during downtime or actual travel, or occasionally indulging in a bit of backstabbing. These are accessed via a funky branching set-up that has to be activated from the menu, as opposed to an extra, all-in-one feature. When the little signpost icon pops up during the episode you can enter the extra clips and see what turn out to be, generally speaking, less than entertaining new snippets that add little but the odd giggle to the proceedings.

Reliving The Race (20.16 mins) is basically a highlights compilation from the show, with some input from the contestants and the series' producers. They reveal that the producers really were flying by the seat of their pants with this and were often only a plane, train or taxi ahead of the contestants. It was essentially filmed “live”, meaning that the cameras only had one chance to nail the shot, so there was no possibility of doing any re-takes. The team members outline how they heard about the forthcoming show, auditioned and soon found themselves thrown into this epic race around the world. Kevin and Drew are truly down-to-earth, wisecracking and sniping at each other throughout - much like they did during the race, itself.

Creating And Co-ordinating (9.00 mins) details how producer Bertram van Munster challenged show creator Elise Doganieri o come up with something new and different. Jerry Bruckheimer crops up to admit that he likes to do things in a big way - it's surprising that he didn't blow up any of the exotic landmarks along the route. It's nice, but brief. The Race, itself, must have been an absolute logistical nightmare to oversee, but the featurette only really scratches the surface.

Next, we get what amounts to a deleted scene showing the teams undertaking a challenge to eat an ostrich egg. This is hardly I'm a Celebrity, Get Me Out Of Here but it does get a little messy, and queasy if you don't like raw eggs.

It's not a bad set of extras, in the scheme of things. I mean the show is the main item on the menu, obviously. But, I can't help thinking that, with a format that was this new and influential, a more in-depth examination might have been in order. A globe-trotting, all action show, The Amazing Race definitely has a unique feel. It takes the reality TV concept and really runs with it. Combining genuine challenges, physical and emotional, it is life-on-the-edge by proxy for the adrenaline-loving couch potato. I didn't think I'd like it, as I've already said, but it contained enough twists and turns and real-life drama to keep me watching. As with any contest as long and as intense as this, an attempt is made to get to know the participants, but I was still surprised by how little I actually gave a damn as to who was eliminated. The madcap moments have a cool drive that does get the pulse racing, though. And the challenges are pretty nifty, too.

I'm not that impressed with the extras, to be honest. But, in the set's defence, the main thing is the show, itself, and there is certainly enough of that to keep you entertained. The AV quality is perfunctory - it does the best with what it's got. This was a TV show, after all, despite the presence of Bruckheimer, and to knock its little faults and discrepancies would be churlish.

Overall, this is a great boxset, folks. If you were a fan in the first place, then this is an essential purchase. If, like me, you are new to it, and you decide to take the challenge - I think you'll enjoy it. However, I really cannot imagine anyone other than the teams involved ever actually sitting through it a second time.