The Adventures Of Sharkboy And Lavagirl In 3-D DVD Review 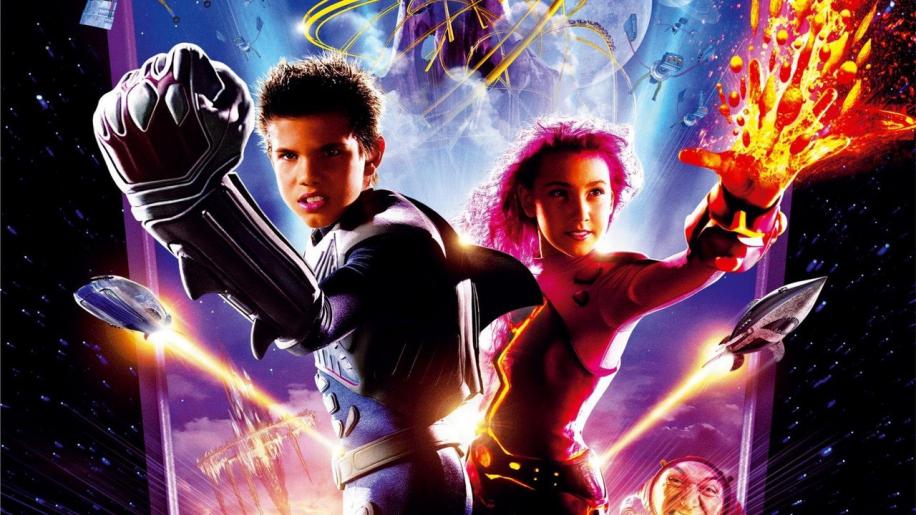 Presented in Anamorphic 1.85:1, this is far from a great transfer. Scenes heavily reliant on blue-screen and CGI backdrops don't fare too badly, but the limitations of the picture really come to the fore when the film operates in the real world. There is sporadic evidence of haloing and the picture is soft at the best of times. A real distraction however is the incessant blurring and bleeding of edges which gets pretty unforgivable on occasion. It's not all bad however. The print itself is in great shape (which it should be given the fact the film is under a year old), and the colour palette is impressively rich and vivid, with even skin tones and rock solid blacks. Alas this counts for zero if you are watching the 3-D version as the spectacles reduce everything to that murky shade of reddish brown. As for the 3-D itself, the best I can say is that it works. If you can be bothered to sit through it, this may be a diverting avenue to take, but it's really nothing none of us didn't see on the back of cereal packets 20 years ago. Although not as disappointing as the transfer, the 5.1 channel audio offered here is still somewhat lacklustre. There can be no complaints over the clarity of the sound, with dialogue and effects nicely distinct, and never less than crisp and clear. Unfortunately, the whole exercise comes across as being somewhat weedy and understated. For a film such as this which requires you to switch the brain cells off and merely get engaged in the action, this is somewhat of a letdown. Full surround is in use, but the rears are never really offered that explosive burst of energy they so desperately need. Likewise the bass is thin and lifeless. Overall a technically proficient mix, but a somewhat passionless one. Before anyone gets carried away believing this two disc set to be full of extras, think again. The two discs get used to present two different versions of the film: the 2-D version and the 3-D version (complete with four pairs of snazzy spectacles). Now the best thing that can be said here is that at least the DVD producers didn't attempt to squeeze two versions of the film onto a single disc. In terms of actual bona-fide additional features, these are thin on the ground with only two supplements. Extra number one is a brief (8mins) featurette 'Creating Sharkboy and Lavagirl with Racer Max'. Here we get to see the little criminal mastermind responsible in all his glory. Narrated by Rodriguez Snr, and intercut with home video footage, this piece of fluff is little more than a publicity shoot which goes to great lengths to describe what an inventive and all round great guy young Racer is. Like I care one iota. Secondly comes a full feature length commentary with Rodriguez himself. The fact that this is there at all seems a little bemusing. It must be solely for the benefit of all the 8 year-olds watching this who have a keen interest in the lengthy production details concerning the film. I listened to this out of some sort of morbid curiosity. The nearest comparison I can draw is with victims of crime who feel the need to stand face to face with the criminal in order to achieve some personal closure. Here, I felt I needed to hear Rodriguez's side of the story, how he justified this film. Unfortunately despite my hopes the director remains resolutely unapologetic for unleashing the movie on the world. He even goes as far as proclaiming it as “his favourite film so far” which quite frankly beggars belief. Rodriguez's unflinching admiration for this aberration borders on the comical (was he on medication when he did this commentary?), and his insistence on discussing it as a worthwhile film is like a slap in the face for those of us who had to endure the twaddle. In its defence the commentary does hold a lot of information on the constructing of the film, but as with the featurette, Rodriguez spends most of the time hyping up his son as some great prodigy. Great fun if you are a member of the Rodriguez clan, not so great for the rest of us to have to sit through his constant back-slapping and championing of this movie. A horrific and indulgent mess from a director who really should know better. Worth considering only if you or your offspring have severe self-loathing or masochistic tendencies.