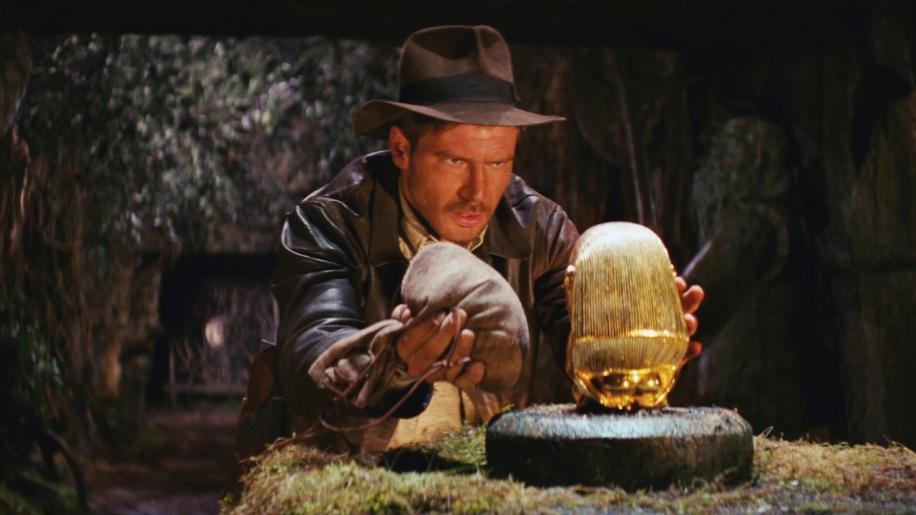 Raiders of the Lost Ark
Framed in its original 2.35:1 aspect ratio and anamorphically enhanced it is clear right from the start that we are in for something special. The transfer has been taken from a High definition print special cleaned and restored for this edition and it looks stunning. There are no signs of any dirt or print damage and very few signs of digital artefacts such as edge enhancement. Colours are rich and well saturated with skin tones looking natural, blacks are solid and contain a good amount of shadow detail and there is a good depth to the image. On close ups faces looks very detailed with lines are pores visible and there is a fair amount of detail in backgrounds with only wide shots suffering from a softer look. This print makes it seem like the film was shot yesterday never mind 22 years ago, stunning, absolutely stunning.

Temple of Doom
Again presented in 2.35:1 Anamorphic widescreen this print just carries on from where we left off with Raiders. It is just as colourful, clean and impressive to behold. However there were a few more niggles to be had with this transfer and that is mostly down to the difficult source material. Temple is a darker film and in more ways than one, with most of the film being shot in the caves under the palace. Whilst black levels and detail are good, I did notice quite a bit more grain and noise in the darkest images. I also noticed edge enhancement rear its head during the opening number, especially around the credits and the reds used by the dancers appeared to bleed a little. That said this is still fine work for a 20 year old print which looks sublime.

The Last Crusade
The final movie tops the lot by looking even better than Raiders. The 2.35:1 anamorphic image just oozes detail in every scene and looks super clean and damage free. The colours are rich and bold and all that is good with the last two films can be seen in spades here. The high definition transfer is sublime to watch and you constantly need to remind yourself it is 16 years old. Outstanding!

Raiders of the Lost Ark
The entire trilogy has been remixed in Dolby Digital 5.1 (448kbps) and sounds stunning! Right from the start you are hit by an enveloping experience with the sounds of the jungle surrounding you completely. As Indy and his helpers walk through the jungle he pulls a dart from a nearby tree, as his two followers investigate this there a few birds calls, one from every speaker before a loud big squeal is heard from rear right to rear left behind you, excellent!. Then as Indy jumps the pit to escape the cave (8m43s) the stone door is lowering itself, about to close him inside. The sound of the stone has a dynamic weight to it with the LFE helping out in spades. Indy gets through only to find a huge stone ball is now following him picking up momentum as it rolls. All five speakers come to life with rocks falling around you and the LFE rumble of the stone getting louder as it gets faster, a classic scene which has never sounded so real before.

Moving further into the movie and a battle ensues in the streets of Cairo as Indy's love interest is kidnapped. At 40m15s the crowd disperses to reveal a swords man in Indy's way and he is well skilled with the weapon but Indy just pulls his gun and shoots him. The sheer weight of the gunfire is OTT but sounds brilliant, then there is the chase through the back streets following the basket, again the surround use is first class with the female scream from the front, back rear right and then centre again, great effects placement. And it just continues to get better with the snake pit (1h03m16s) with hissing coming from every direction as well as the thunderstorm outside and then the finale when the Ark is opened (1h45m41s) there is a low end rumble and then the spirits fly amongst the Nazis, again this is first class mixing. The sound engineers obviously had great fun creating this discrete mix from the Dolby Stereo originals and this film has never sounded so good.!

Temple of Doom
The temple of doom Dolby Digital 5.1 remix is just as adventurous as the Raiders track. The film opens on a musical number sang by Willie and this opens up the front soundstage impressively with good dynamics and steering. In fact there is one point were Willie dances to the right of the stage and her vocal follows here there and back again. There are some excellent moments scattered throughout the movie and the real sub killer is the moment the water follows the Mine cars down the tunnel (1h38m54s) with a real sense of weight and power. Dialogue sounds rich and the entire remix crates a wide and enveloping surround experience, first class fun.

The Last Crusade
Being the most recent film in the set, Crusade sounds very dynamic indeed. The remix again provides a hugely enveloping experience with dialogue sounding rich and clear. The score this time around sounds fuller and more detailed with plenty of bottom end. Near the beginning we see Indy aboard a ship trying to take back a lost artefact. It is night and huge waves are pounding the boat hard. The sheer weight and complexity of the mix is breath taking with punches producing a real thud and the waves creating some interesting LFE use. Moving on (1h03m32s) father and son are involved in a high speed chase on motorcycles, the sounds of the engines coming through loud and clear and small nuances like gravel sounds are not lost within the complex scenes. Again this is excellent movie remixing, the purists might not like it, but I have never heard these movies sound so good.

The fourth disc in the set contains some extras of real value. Starting the set off is The Making the Trilogy which is split into three parts (each movie) and gives you the option of watching them separately or all at once. The first covers Raiders and how Indiana Jones came to be featuring interviews with Spielberg and Lucas, as well as production staff involved. Now this is what I call proper behind the scenes material, everything is covered and some of the behind the scenes footage is stunning. Indy was originally cast to Tom Selleck but contractual agreements meant he had to pass on the part. Ever wondered what he would have been like in the part? Well we get to see with some stunning test footage. And did you know that R2D2 and C3PO were in the movie? Raiders runs at 50minutes. Next is much the same for the next two films, the documentaries go into great detail and have run times of 41 minutes and 35 minutes respectfully. Next we have the featurettes covering different aspects of the production with the cast and crew discussing the stunt work involved which runs for 10 minutes, Ben Burt talks us through the sound design and the real use for cheese casserole for 14 minutes, John Williams discusses his inspiration for the score for 12 minutes and finally the ILM team give us there round up for 10 minutes. You have the option to watch these individually or all as one. Finally we are given teaser trailers for raiders and Crusade along with all three theatrical trailers and a video game preview with web links rounding the set off. It might not sound like much but these extras kept me busy for around three hours alone, all are well produced and you will want to watch them more than once.

The films are classics and they have never looked or sounded as good and the extras are first class, highly recommended.