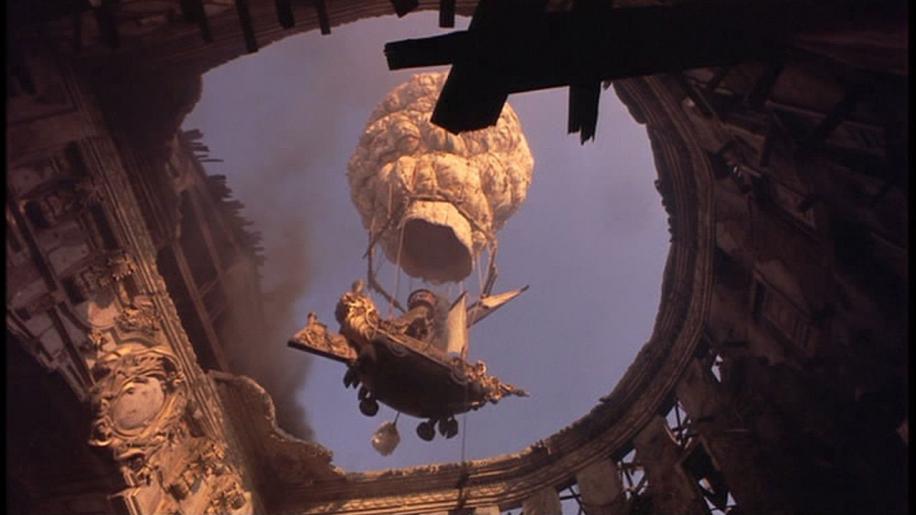 The Adventures of Baron Munchausen Movie (1988)

After completing The Time Bandits and the altogether excellent Brazil Terry Gilliam and co screenplay writer Charles McKeown embarked upon what would be their most audacious project to date, The Adventures of Baron Munchausen. The production of this ambitious project are now well know, reportedly costing some 45 million US dollars to complete it only took a paltry 8 million on it's release. The question remains, why?

Baron Munchausen, or Karl Friedrich Hieronymus von Munchausen to give the real man his proper title, was born in 1720 and fought the Turks for the Duke of Brunswick. It wasn't his campaigns he was renowned for though; no he goes down in history for the elaborate stories he concocted after the fact.

The film opens with a theatre company regaling some of these stories to the besieged inhabitants; stories of Munchausen's trips through sausage bushes, trips to the moon and life inside the belly of a giant sea monster. They are joined by the real Munchausen (John Neville) as he recounts his real life history, or at least real as he sees it. He relates the start of the war and how he himself started it by tricking the Sultan of all of his wealth. To these ends he feels somewhat responsible for the ongoing situation and vows to end the current conflict.

He has to find his old, now long lost, comrades. These earlier Extraordinary Gentlemen consist of Berthold (Eric Idle) the fastest man on Earth, Adolphus (Charles McKeown) a man with great eyesight able to hit a bull's-eye from half way around the world, Albrecht (Winston Dennis) the strongest man on Earth and Gustavus (Jack Purvis) a man of short stature but with acute hearing and the lungs of an ox able conjure up whirlwinds on demand. Accompanied by young Sally Salt (Sarah Polley) the good Baron travels to the ends of the Earth and beyond to reclaim his friends, here we see these adventures and once his friends are all reunited how he intends stopping this ongoing war.

The Adventures of Baron Munchausen is the final part of Gilliam's 80's trilogy. Starting with The Time Bandits which introduces us to youth, through Brazil covering middle age to now The Baron where old age is explored. All three however have one thing in common, that being how the adventures of the mind are always at odds with the realties that life throws our way. This is no more apparent than this feature though. The Baron and all of his comrades are now old and all await death in some shape or form, some indeed welcome the moment. Once they embark on their adventures again though they regain part of their youth and Gilliam's showing us that we must never stop our imagination, never stop the wonderment of all that is around us. As Michael Pritchard said "We don't stop laughing because we grow old; We grow old because we stop laughing" and the same can be true of our imagination and sense of adventure.

John Neville and Sarah Polley in particular carry this film. Neville always showing the wonderment of The Baron and his refusal ultimately to grow old, Polley though is a star beyond her years providing the voice of reason throughout. The fact The she went onto bigger and better things only shows the true nature of her character.

Supporting cast members include an excellent Bill Paterson playing The Baron on stage and at times his adlibbing is simply wonderful. Being north of the border my personal adlib favourite being "A good Night Out - The Glasgow Herald" on trying to save the fortunes of his play. Jonathon Price is the weasly The Right Ordinary Horatio Jackson continuing the ongoing war for this own little ends, Uma Thurman as stage actor and the Goddess Venus shows us here in her early career what she was capable of and the potential that lay within. Ollie Reed crops up as the God Vulcan, smitten by Venus but incapable of anything romantic and worried continually about his striking Cyclops employees. An uncredited Robin Williams playing the head of the King of the Moon. Well if you never knew this wasn't a Gilliam film from the outset then this eclectic cast should have given the game away from the get go.

The special effects are extensive for its time. Gilliam's always had wide ranging vision and this was put to the ultimate test here. A cast of thousands, costumes from all walks of life, hot air balloons, elephants with canons on their backs, the inside of a sea monster's belly, a quick trip to the moon. If he had been given the time and the budget that was absolutely necessary for this to come to complete fruition then The Baron would have been an absolute tour de force. Unfortunately though items out with his control mean that this feature started off 2 million over budget before even one frame was shot!

The adventure of the film itself is much like a story that the good Baron would have been proud of, if something was to go wrong then it would; costumes held up in Spain because of a customs strike, trained dogs not being able to perform due to illness, trained horses not allowed into Spain because of an outbreak of African Horse Fever, Italians charging over the odds for services which could have been procured elsewhere for much less cost, rampaging elephants, hurricanes destroying sets... the list goes on and ever on. To his credit though Gilliam and his team eventually managed to persuade finance and insurance companies to release more funds and the job was completed. Perhaps not to Gilliam's ultimate vision but complete nonetheless.

The end result though is something of which he can be proud. It completes his 80s fantasy trilogy well, and offers up a vision few others would have even dared to contemplate. It's not going to be to everyone's tastes, but it certainly is to mine. Recommended.