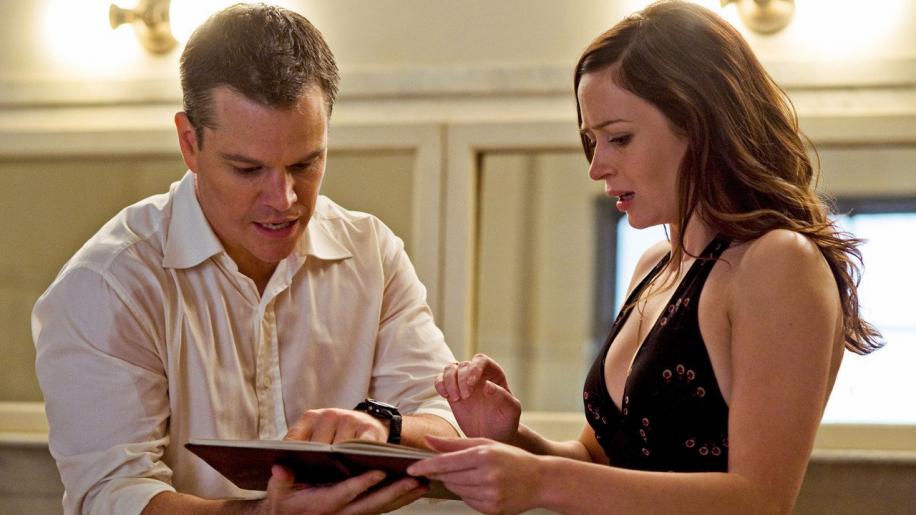 Do not adjust your sets. There’s nothing wrong with this picture. Ok, so I’m pretty sure, when I sat down in the cinema, that I was all prepped and ready to see a film that was touted as ‘Bourne meets Inception’. Now that’s a pretty high standard to achieve – and I’d seen the ridiculous hat Matt Damon was sporting in some of the posters – so I kept my expectations in check, but how badly wrong can you go with a sci-fi action thriller? Um, well by the end of the film I felt kind of a little short-changed. It wasn’t a bad film by any means. I actually quite enjoyed it. But it’s like a sci-fi action thriller, only without the action, with limited thrills, a bit of witty humour and a hefty chunk of romance in it. In fact, come to think of it, have I just been tricked into seeing a romantic comedy disguised as a sci-fi action thriller? Oh yes, I have. Looks like somebody has been doing some adjusting...

I really don’t know how much to tell you about this movie because if, like me, you saw the trailer and thought it was something that it clearly isn’t, pretty much anything that I say will be something of a spoiler. Basically, it’s about David Norris, a young, charismatic politician, running for senate. He’s great in front of a crowd, great on camera, winning the hearts and minds of the younger demographic, and with a straight-talking manner that appeals to most everybody. A chance encounter with a girl, Elise, however, changes everything – literally. When he arrives at work, he finds strange men in his office, operating on his co-workers. Taken by these men, he is told that they are the Adjustment Bureau, a clandestine group that make tiny tweaks in people’s lives to ensure that they go down ‘the right path’. They reveal that they have great plans for Norris, but in order to see them through to fruition he has to do two things – never tell anybody about anything he has seen; and never see Elise again. Or else.

That’s the best I can do without giving too much away. The Adjustment Bureau is a quirky little film which totally took me by surprise. Mainly because it had none of the ingredients that the trailer or promotion would imply. Taking a look behind the curtain I found out that it was based on a short story entitled “Adjustment Team” written by Phillip K. Dick (whose work inspired numerous movies including Blade Runner, Total Recall and Minority Report). So far so good. The story apparently covered what amounts to the first act of the movie – most of which is covered above – and my problems with the film mainly come from where they go with it.

God? Fate? Mysterious hat-wearing strangers who have the power to tinker with your very destiny? Well, hats notwithstanding, it had the potential to go places. To make you wonder about all the little things in your life – the chances you don’t take; the opportunities you miss by a fraction of a second. Determinism or free will? Could there be a higher power who controls everything that happens in the world? Or is your fate really in your own hands? And if there was an omniscient, omnipotent God, are any decisions actually ours, or do are we merely tricked by the ‘appearance’ of free will? The film could have had a great theological undercurrent.

Unfortunately The Adjustment Bureau plays it safe. I mean, really safe; instead focussing on a chance encounter between a man and a woman which affects the rest of their lives – a spark which, once both of them notice it, simply cannot be forgotten in favour of other loves. No, these two must be destined to be together, surely? Nothing can stop true love. It really is quite disappointing the direction that they choose to take things in – when you consider that the short story was about a guy whose fate was to play a major role in diffusing the Cold War, it’s a bit anticlimactic that this tale is actually just about, well, true love.

The flipside to all that? Matt Damon and Emily Blunt. Matt Damon has spent the last few years taking himself quite seriously on film – from the Bourne Trilogy to Green Zone, there was little room for happy romance, and simply no room for humour. And that’s a shame, because he’s actually quite a witty guy. Have you seen Good Will Hunting? Powerful, touching, dramatic – but also sporadically very funny; and he’s got good chemistry with Minnie Driver in it too. Exactly the same can be said of The Adjustment Bureau, where he displaying effortless charm and a fantastic, dry sense of humour; playing off Emily Blunt’s own sexy sassiness (and wow does she have several, um, well-chosen outfits) with some warm, playful banter. They have undeniably great chemistry. Sure, we’re still talking about Hollywood love here, and Hollywood’s the place of star-crossed lovers and serendipity; but there are still a few great moments between Damon and Blunt – and genuine on-screen chemistry is getting less and less common these days.

In terms of sci-fi thrills, The Adjustment Bureau is far too well-mannered for its own good. Populated by a bunch of poorly developed secondary characters – including the agents of said bureau (who dress like the cast of Mad Men – and even include one of them: John Slattery, alongside The Hurt Locker’s Anthony Mackie and Terrence “Kneel before Zod” Stamp); and the throwaway campaign crew – the movie loses most of its tension after the first chase, getting dragged down into its own quagmire of ill-conceived and thoroughly anticlimactic revelations. By the end of it you’ll wish they just stuck with the original short story, and merely padded it out to theatrical runtime, because this particular story – little more than a glorified romcom narrative, with a sci-fi twist – simply does not live up to the expectations that you have after such an intriguing premise. Or after being told that the film is supposedly ‘Bourne meets Inception’. Hell, even the poster art adopted the same style - and almost identical tagline - as Michael "The Truth Can Be Adjusted" Clayton (and The Social Network), making you think this was going to be a serious affair. It will be interesting to see the eventual home format release because the theatrical ending wasn’t the original ending they shot – it was actually filmed after the movie was complete, which I can only assume, was as a result from poor test audience reactions. The original ending purported to put a face to the Wizard behind the curtain. And, honestly, anything could have been better than the ending they could have come up with. It pretty much seals this movie’s fate to be lost amidst the forgotten wannabe-contenders. Inception-lite? Even that’s an exaggeration. What this has going for it is the great chemistry of the two leads, which leaves you invested for the duration, and interested in what happens to them, even if what actually happens to them is pretty damn lightweight. Watch it for because it's the most easily digestible rom-com you’re going to come across this year, or use it as a great introduction to sci-fi movies for those girls out there who don’t usually like them.

Great premise. Great chemistry. But misleading advertising, a tempered audience-friendly romantic narrative and a thoroughly anticlimactic payoff leaves The Adjustment Bureau pretty far from being 2011’s answer to Inception. Taking the potential from a great Phillip K. Dick short story, the movie squanders its opportunity for deeper theological undercurrents, playing it safe and, despite its original ideas, ending up sitting squarely in cliché territory. With few thrills, and even less action, it’s pure rom-com all the way, just dressed up with a sci-fi twist. But this is one of the areas it doesn’t do so bad in – the chemistry between the two leads sparking a convincing romantic thread; and the natural charm and wit of both of them also allowing the audience a chuckle while they’re waiting, in vain, for some thrills. Don’t be fooled by the superior premise, go into it with open eyes, and expect a fairly lightweight sci-fi romance, with a good sense of humour. That way you won’t be disappointed. Me? I’ve already got my eyes set on the next interesting project – promoted in one of the trailers before this movie – a movie called Hanna. It’s about a teenage girl who happens to also be a highly trained killer. Hang on, don’t switch off yet. This one’s directed by Joe Wright, the guy behind Atonement, and stars Eric Bana and Cate Blanchett, and the little girl from The Lovely Bones in the title role. Trust me, it looks pretty special. And it doesn’t look like it’s going to secretly turn out to be a romantic comedy either.