The ABCs of Death Blu-ray Review 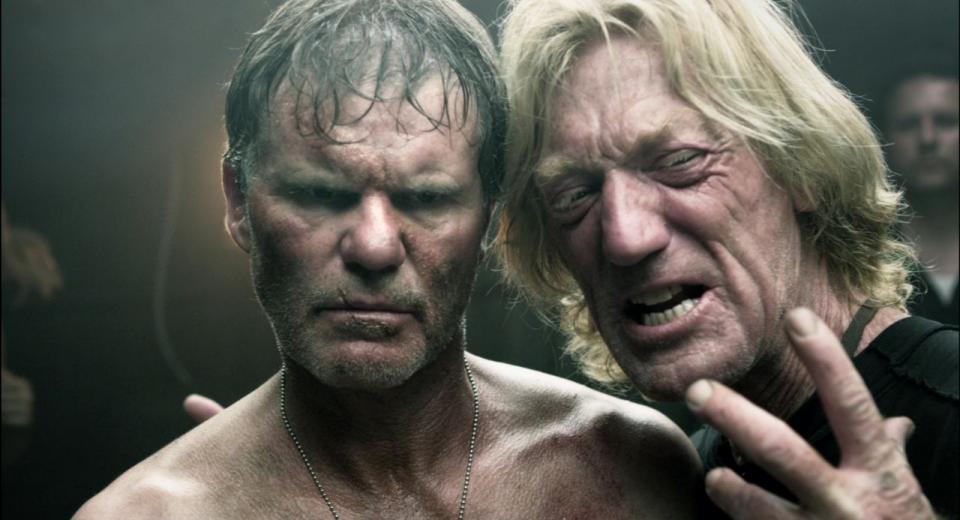 Tough call on this one, really.

You’ve got 26 little films here, and they are all shot differently with a variety of cameras and techniques. This said, the Red Camera seems to have been a popular choice. Some ramp-up the colours, some blitz the contrast for a nuclear sheen, and some go sterile. There’s grain in a few, none in others. Some offerings have grain in a partial covering, and are then swept clean at other times. A lot of the grain is actually artificial, too.

Even though colours are very vibrant – gaudy, thick and oozing in some cases – the overall palette is yellow and brown and somewhat burnished. Dry looking. Yet, within this frame-work, the full range of shades are employed and the primaries are startlingly bold. Yeah, there’s all the gore and the crazy set-designs and costumes, but just look at the little red spider in the otherwise lousy Exterminate – pin-sharp and vibrant at all times. Some films celebrate colour, whilst others make far more effort to eschew it. Dogfight is a sweat-stain, for instance, and while some create fantasias, others blend bruises to concoct their vistas. The high-glitz, shield-your-eyes neon puke of Eisener’s earlier Hobo With A Shotgun is a clear influence on some of these aesthetics. His own Youngbuck delivers extremely bold reds and oranges (with a touch of bleed during a couple of early shots), a wretched mottled green. There is a jaundiced look to Vagitus, and an image that embraces some scintillating lens-flares. There’s a gorgeous pink/purple meld in Zetsumetsu. The disc copes admirably with all this lurid techno-vom. Contrast, as I said, is all over the place, though this is clearly intentional on the part of the filmmakers, so it would be difficult to pick fault and assume that the transfer had made any errors. Blacks are usually very deep and strong, with fine shadow depth and delineation. But they can also be washed-out and mired with grey. Again, you have to assume that this is deliberate.

Courtesy of these hi-def cameras, detail is unbelievably good. When the material calls for it, the image is staggeringly crisp and clear, with some profoundly clean close-ups. Eyes and wounds, and the acres of naked flesh are repeatedly held up for scrutiny. I’ve mentioned some of the fabulous ladies offering their wares for our 1080p delectation, and this transfer is more than up for the task of allowing your eyes to study them as finite as skin texture, pore, the odd discoloured tooth, pimple, blemish and stray lash. This clinical zeal is all very arty and unmistakably very unlike film. Some intensely hyper-real shots really pack a visual punch. Look at The Boy in the woods with The Man as he strains with the bow and arrow in Youngbuck – they are background characters, yet they are incredibly strongly rendered. It’s the Red, obviously, but the transfer delivers its imagery with total conviction. Obviously, given the nature of some of the shorts, there are entries that do not appear as detailed, and have a diffuse and softened appearance. Backgrounds can be gleamed-out and immolated by high-warp contrast. But, on the whole, the image is spectacularly detailed and vivid.

Considering the style of all this, and with Dredd’s 2D visual aberrations in mind, it is worth noting that noise appears to afflict some of the imagery, stippling some corners of the frame, but it is hard to say for sure as much of this buzzing unpleasantness could well be down to the digital source. But a couple of things that did catch my eye were the aliasing taking place during some action scenes, and the considerable amount of banding revealed on this PR copy. I watched this on a Panasonic VT50 and then on my LG monitor, and the banding was horribly prevalent on both. Not all the time, of course, but in many densely saturated moments, most obviously within the red-blood story-dissolves between each entry, it would flower up and unfurl in big hazy wobbles. Given the richly varied visual nature of the films in question, though, I didn’t actually feel too concerned about this. The films are super-stylised and a great many of them are over-the-top neon-fests, literally drenched in digitally caught colours. In some ways, the effect even added to the heightened, ultra-unrealistic allure. But, I’d still rather it wasn’t there.

Not everyone will like the look of the movie, but it is strongly detailed and often strikingly vivid and, barring those encoding issues, very faithful to the filmmakers’ intentions, I’m sure.

It is also important to note that the film contains moments of intense colour-flashing and strobe effects, so those affected by such things, beware. The audio for the anthology is DTS-HD MA 5.1.

It is excellently presented, folks, so long as you don’t expect the rears to have much to say for themselves. Dialogue is fine. There really isn’t that much of it, to be honest, and what there is comes across in several different ways – from crystal clear to whispered or shrieked, and from deliberately on-the-hoof to purposely mumbled in Lancashire accents from wobbly clay mouths.

Heavily frontal-based, this is still a richly detailed track that delivers lots of finite details from a mix that is considerably bass-intensive and deliberately heightened. Subtleties like chopping vegetables, the creaking of furniture and the twisting against bonds, the breaking of a crusty cob and the shredding of flesh are embellished and magnified. This last element is giddily exemplified in Removal and XXL, and there is a nasty, gristle-snapping noise to accompany an eye-gouging and head-severing later on that is lovingly sinewy and squirm-inducing. But the mix has been finely engineered throughout, so you are going to hear and experience all that the makers want you to.

A rewarding factor is that the bass is very good and surprisingly plentiful and consistent in its employment. It helps to exaggerate the effects, the musical scores and the impacts with some gusto, and it is about the only element that seems to move about the environment. During the bigger moments of .LFE activity, the sweep and spread of the sub genuinely reverberates all around. Toilet actually makes for a finely immersive episode, as does its immediate follow-on of Wheatley’s Unearthed. But what tends to happen throughout many of these tales is that the audio track becomes a constant ambient presence – often unusual and threatening walls of sound – and this filters around the set-up with steady vigour. There is some degree of channel directionality in Vagitus for the sounds of the future highways and the opening gun-battle, but it is nothing to get excited about. It is the finer directionality and steerage that you don’t really get to appreciate. I’m not complaining at all, I actually think the approach really works well the style and the material, and this is certainly a mix that deserves to be heard loud, as it is thick and organic and literally seems to smother you with energy.

Once again, it is the awesome synth track that boosts Youngbuck that I feel compelled to root for as another standout element. Not that it gets wrapped around you or that it punches you in the gut, but simply that is Vengeance by Power Glove sounds so damned good that I can’t stop playing it. I’ve had the track pulsing out throughout this entire write-up. I’ve been bopping that much that I can hardly punch the right keys. LUV 80’s SYNTH!!!! We have some great commentaries from the filmmakers. Too much to go into here, basically. It is good to hear that they totally understood the concept, and put some thought into how their individual episode would fit in with the rest. Jason Eisener, for example, knew that by the time audiences got around to his story, Youngbuck, they would have seen pretty much every horrific sort of image and experienced every disturbing emotion under the sun … so he would have to strive to provide something that would still gross them out even by this stage. Well, he managed it all right. There are commentaries for each of the chapters, and the foreign filmmakers are subtitled.

There is also AXS TV: A Look at The ABCs of Death, which lasts just four minutes and basically gives an overview of the project from the filmmakers, themselves.

We also get several trailers, including Red and Green Band.

Considering the size of this project, the extras are a pretty good bunch. Now I know my ABC … won’t you come and bleed with me?

That’s my joke, that … and you know what? It would have made the perfect tagline for this film.

The ABCs of Death may not be quite a revolutionary as it likes to think it is – let’s face it, the concept is not in the least bit original – but there is no denying that it is a thrilling, inventive and often quite outrageous undertaking that should, in theory, have something for everyone. These are not all horror stories however – well, not strictly – but they all work as a collection that probes and observes some of the deepest, darkest taboos that we have about Death … and some other even less savoury hang-ups.

There is a lot of ground covered and the journey is punctuated by some dazzling imagery and a clutch of really audacious chapters that really do stick in the mind.

Whether it be personal, sexual, apocalyptic, perverse, bizarre or hilariously surreal (Fart is one of the happiest, zaniest, most beatific of absurdities that you’ll ever come across … but that’s nothing compared to Zetsumetsu!), meeting one’s maker is addressed with wit, tragedy, irreverence, anger, sacrifice and defiance. Some don’t work, some try too hard, and some just go-for-broke, but this is certainly a production that demands a look-see if you have the necessary constitution, sense of humour and, at times, patience.

Monster Picture’s release has a fine transfer that faithfully caters for a wide range of shooting styles and techniques, and a good roster of supplements. If you have an interest in the vicarious, vicious and varied directions that modern horror has ventured down, then you should give in to the chaos and the madness this project offers, and go back and learn your ABC’s Of Death.