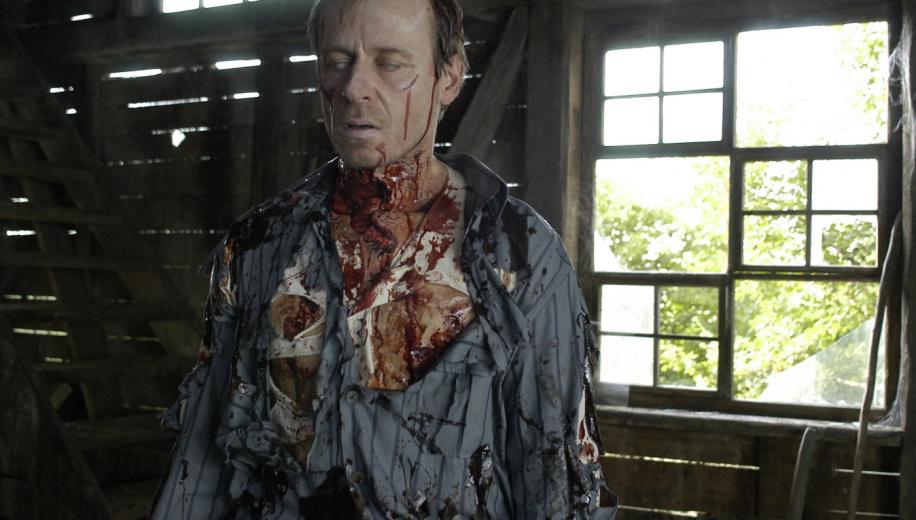 Coming to SD disc with an anamorphic 2.35:1 image, The Abandoned looks pretty darn impressive. Surprisingly sharp and detailed - especially as all I tend to see these days is 1080p fare - this is quite reassuring for plain old DVD. Cerda favours a spooky green-tinged palette that comes over well. Other colours are deliberately down-graded, yet when we see blood it is thick and red. Reds on the whole are strong and vivid, and obviously dramatically heightened, such as portions of the paintings on the walls. The woodland offers some variance for the earthy hues and the pockets of sunlight that try desperately to peek through the trees are suitably bright and warm. Eyes shine - those that aren't horribly white, that is - and facial detail is quite finite, with dirt, grime, blood and sweat all nicely rendered. Skin tones look appropriately sick and ghastly - even for those who aren't actually dead. Some of the gore fx are quite lovingly detailed, too, especially a seriously ripe scene of snouty devouring that recalls the heady days of Lucio Fulci's infamous gut-munching mayhem. The reds here literally glisten.

Blacks are very good and display a depth and strength that is wholly necessary - indeed vital - for a movie such as this. The house is literally composed of shadow and unlit rooms of squalor, murk and wood-peeling dishevelment and it is due to the fine transfer that so much detail can still be gleaned from a picture that is constantly swathed with ever-creeping inkiness. Midnight blues are highly evocative, too. Contrast has been altered deliberately to match the mood of the film, so don't be surprised when some exteriors look unnatural and burned-out. But there is a consistency to the transfer that is reassuring throughout. Some background shots, both internal and external soften-up a touch, but nothing too damning to an image that likes to have its characters well-lit and defined against a foundation of such drabness - and it makes for some reasonable three-dimensionality in some instances, too.

Sadly, the disc has some obvious edge enhancement and one or two instances of visible noise, but otherwise the print is in clean, unblemished shape. The thin layer of grain looks absolutely fine and helps to bed the movie into a nice cinematic tone so, all things considered, this SD disc does a great job of injecting life into The Abandoned. A future BD release bodes well. The DD 5.1 mix that The Abandoned possesses is a great all-rounder, folks.

The film depends highly on an elaborate sound design that runs the gamut of haunted house aural dynamics with style and conviction. The numerous creaks and groans of old floorboards, the slamming of doors and the bolting of locks, the ominous clanking of the old pipes and boiler as show-time begins, the knocking of nails into wooden barricades and the heart-lurching screams are all dished out with verve and clarity. Deep bass rumbles on the score and the fx are often backed up with sub-muscle, keeping the experience suitably physical.

Detail around the soundscape is good, too. There are plenty of nuances and textures embedded within the design. The stabbing of a knife into soft flesh, the various gunshots, the sudden stingers - they all carry weight and depth. Steerage around the set-up is often cleverly done and although I've heard smoother panning from front to back and left to right and so on, this still does a more than adequate job of spreading the sound around the environment. However, there are a couple of things don't come over quite as well as I'd hoped. The requisite rainstorm puts in an appearance at a later stage and whilst the thunder rolls across the ceiling with presence, the actual downpour remains firmly frontally based and lacks detail around the soundscape. There is also a death-defying plunge through an upstairs window that doesn't do much with the clarity of violently shattering glass. Mind you, a moment when a truck roars through a fence does allow for some wooden railings to sail past you and out of the rear speakers.

Overall, I was more than pleased with the range and aggression of the DD mix here and it certainly goes a long way to embellishing the atmosphere of the film. One day, perhaps, we will get to hear a lossless version of this track and I think that would be something to savour. At least we get something for a film that is hardly known ... although, to be honest, the extras supplied here are over far too quickly. Besides the theatrical trailers for this and the hippy-slay-a-thon The Tripper, this check disc provides a thirteen-minute making of that actually manages to pack quite a bit into its meagre running time. We meet the cast and the director and hear about the story concept and the aspirations that all have for the project. There is a fair chunk of behind the scenes footage and the cast are happy to talk on-set. Some slight storyboard work is revealed and we get to see some of the stunts being lensed, such as the pivotal truck-plunge. Oddly enough, actress Hille seems to think that the film has a dark “but happy” ending. I'm not sure if I've seen the film she's referring to, however ... because it can't be this one!

A good strong horror film, The Abandoned succeeds by virtue of maintaining its Twilight Zone aura until the final frame. The use of decidedly unglamorous and actually quite unlikeable leads proves to be a refreshing bonus, too - a far cry from the sort of cast an American film would have thrust against the screen. The nightmare scenario pulls no punches and even if, round about the two-thirds mark, Cerda begins to scrape the barrel and start tossing in the usual type of shocks, this is still enjoyably off-kilter for much of its running time. The image and sound quality of this SD disc are very good too, with The Abandoned's gloomy, spectrally-tinted aesthetic looking sharp and detailed and its sound design providing plenty of all-round speaker activity. The making of is short and sweet and really only succeeds in having you wish there was more of it, but, overall, I can't help but recommend The Abandoned. Relentless, grim and well-acted, this takes all the usual haunted house shtick and throws a new spin on the proceedings, which can only be welcome in this already stuffed-to-the-gills genre. But that's the Spanish for you - the most consistently invigorating fantasy and horror filmmakers around at the moment.