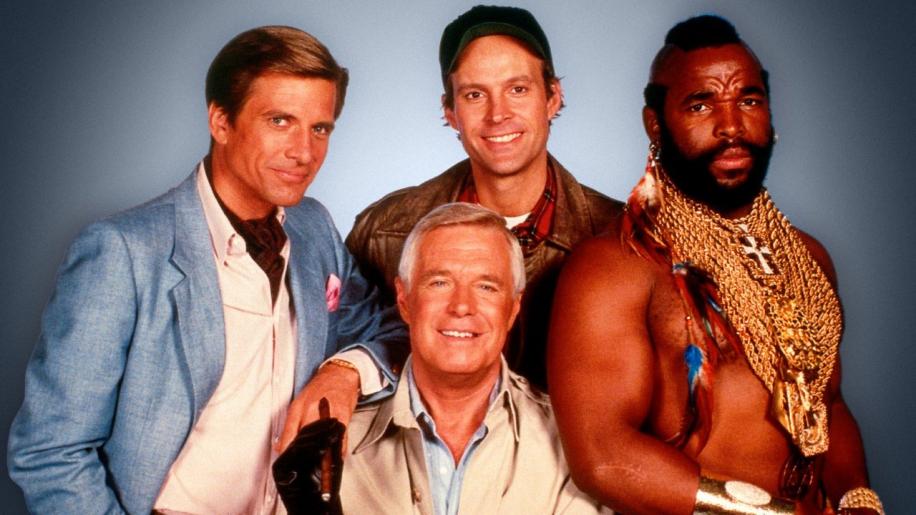 Like the previous season boxsets, the release sees The A-Team presented with its original non-anamorphic 1.33:1 image. But, to me, the picture doesn't seem quite right at times, looking sort of squashed and ill-fitting. No amount of aspect jiggery-pokery on my two TVs could rectify this. Colours are faded across a couple of the discs, yet actually quite splendid on others, revealing nice primaries and a polished sheen. When the image shines, the show looks much better than it did upon its original broadcast. But, occasionally, we get episodes that look as though they haven't been cleaned up since the good old days - that is to say, speckled, grainy (at times) and appearing quite grubby.

Detail isn't too bad for an old TV show. But then again, with this format everything on-screen is big and bold and blaring out with 80's fashions. The hair is big, the clothes are loud and the sets are bland, thus making finite detail superfluous. However, B.A.'s bling is nicely reproduced, as is all that naff-looking silver on the toy shop weaponry. And a couple of episodes featuring the Team moving about through jungle foliage even allows for some nice depth of field and colour separation.

Overall, with some allowances made for the vintage, the shows have scrubbed up reasonably well. The audio side of things delivers a 2-channel mono track that is actually quite clean and bright. Gunfire, explosions and car-wreck impacts come through loud and clear, packing a pleasing, if restricted, bit of weight behind them. Dialogue, though briskly presented and never muffled or swamped by the score or the bombastics, still sounds a little flat to my ears, lacking bite or vibrancy. Mike Post's iconic score often takes centre-stage and, at least, this element never lets the side down, always sounding lively and full of vigour. Nothing at all with this release, except an amalgamation of trailers for other TV shows out on DVD in the UK. A good addition would have been the recent Justin Lee Collins special on Channel 4, Bring Back The A-Team. Would've been better than the show itself, actually. Well, if you are a fan of The A-Team, you will certainly find much to enjoy with this boxset. Doubtless, you will already own the previous two seasons, which makes it pretty much a no-brainer that you should add this to your collection. However, if you are just a casual follower, perhaps seeking to rekindle that flower of the 80's with a touch of TV nostalgia, my advice would be to think twice. This show really is as tacky as you recall. Virtually every episode plays out along the same weary, un-funny and lame-brained pattern. Three episodes in and you may possibly be writhing with the sheer tedious embarrassment of it all ... just like I was.

I barely tolerated the show back then. I despise it now.