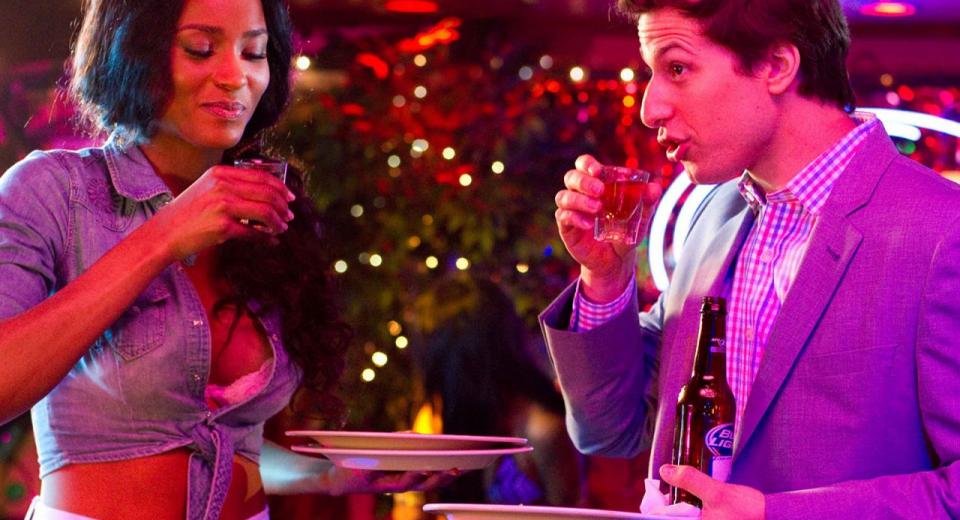 Whatever reservations you might have about the quality of Sandler’s output at the moment, if you’re tempted to pick up this release then the one thing you will definitely not be disappointed by is the quality of the video presentation. It is basically impossible to fault, this UK Region Free release boasting a stunning 1080p High Definition rendition in the movie’s original theatrical aspect ratio of 2.4:1 widescreen. The digitally-shot source is represented by a flawless image that offers up no defects whatsoever – no edge enhancement, no unwieldy DNR, no banding and no aberrant noise – providing crystal clear shots throughout, with absolute detail on close-ups, middle and backgrounds. Skin textures are rich and lifelike and clothing weaves are resoundingly impressive. The colour scheme has a fair amount of range too, effortlessly representing the red-skewed strip clubs and the street-light-lit night sequences with aplomb, and showcasing each and every tone with vivid and vibrant authenticity. One of the best-looking titles I’ve seen in a while, this one gets top marks, and could easily be used as demo material. Similarly the audio accompaniment is pretty damn impressive, the DTS-HD Master Audio 5.1 track which promotes the material exceptionally well. Dialogue comes across clearly and coherently throughout, largely dominating the fronts and centre channels where appropriate, and given the nature of the film – i.e. a dialogue-driven comedy – it forms a significant part of the proceedings. Effects may not be of a blockbuster nature, but they are still treated with respect; subtle ambient noises are well captured and promoted accurately across the array, given access to the surrounds where appropriate. From car noises to crashing waves; from the hubbub of a high school to the percolating bubbles of a Jacuzzi; effects are well-observed throughout. The score probably gets the most prominence, however, with a succession of well-placed tracks typical of any halfway decent Sandler vehicle. It’s hard to call it demo quality material – it is a Sandler movie after all – but there’s little to fault with this offering, and you could arguably use it to show off your system, should you so choose. A fairly lightweight set of extras adorn the disc, including a selection of Deleted Scenes, the requisite Gag Reel and a few inconsequential Featurettes.

5 Deleted and Extended Scenes amounting to a sizable 14 minutes of extra footage. Nothing desperately good, but a few funny moments warrant a quick watch.

6 minutes of the cast and crew goofing around on set; line flubs, goofs and on-set silliness, often with Sandler making his co-stars crack up.

Who are all these People? takes 11 minutes to look at the numerous familiar faces that comprise the extended cameo cast.

Greeting from Cape Cod has 7 minutes of the cast and crew messing about again, mostly furthering the “Whazzuppp?!” joke from the movie for an overlong period of time.

Classy Rick’s Bacon and Leggs dedicates 6 minutes to the strip club sequences and how they were put together. I used to like Adam Sandler comedies, but they got so bad that I would positively dread a new release from him, just in case I was asked to review it. That’s pretty much how I felt when it came around to covering That’s My Boy. Funnily enough though, it’s actually fairly good – it may not suit everybody’s tastes and it probably pushes the boundaries when it comes to inappropriate sexual humour, but it made me laugh almost throughout the entire runtime. These days that’s a pretty rare occurrence for an Adam Sandler movie.

On Region Free UK Blu-ray we get stunning video and audio as well as a smattering of extras; it’s a package which is sure to please all fans of the movie. Honestly, if you’ve ever liked an Adam Sandler comedy then you shouldn’t pre-judge this addition too harshly. It may well be up for a few Razzie Awards, but, if you’re in the right frame of mind you may well find it far funnier than you want to admit. Worth a rental at least.