A lacklustre attempt at a seuqel to a brilliant first game 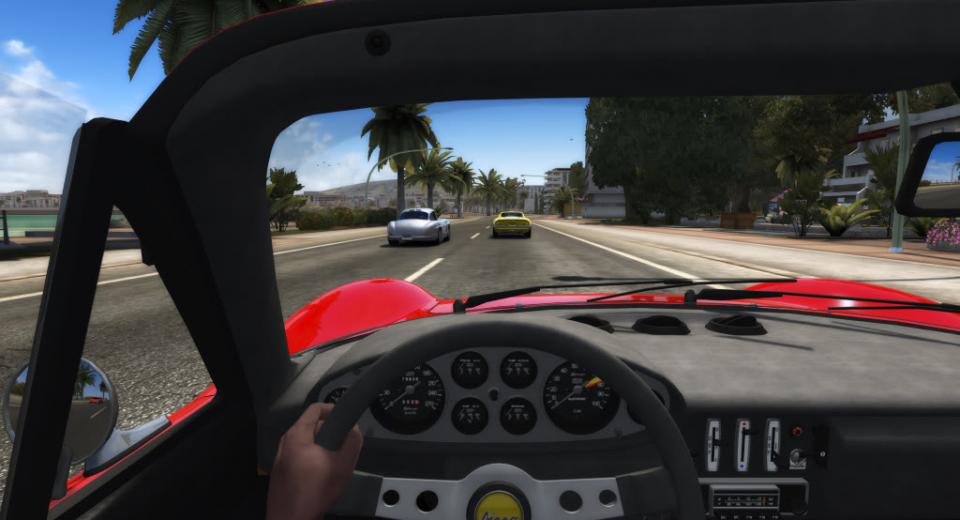 Five years is a long time. Within this time we’ve seen a recession hit, a Labour government come and go and we’ve also seen some of the biggest evolutions within the gaming industry. As a prequel to this game, the original Test Drive Unlimited broke barriers in the racing genre by offering an entirely on or offline experience that encouraged socialising whilst gaming, with the driving often playing second fiddle to this. This was at the start of the Xbox 360’s life cycle though, it was young and we knew no different back then and believed it to be a good title. Flawed, but good nonetheless. But now, we have the likes of Gran Turismo 5, Need For Speed and Burnout, all of which are quality titles in their own rights which TDU 2 must contend with.

The Test Drive series actually goes back some time, to the eighties in fact, and since then development duties have switched hands several times over. Now it lies in the hands of Eden Games, who have released titles such as V-Rally and Alone in The Dark. The previous title, as mentioned before, had its flaws such as becoming a bit repetitive and the online connectivity aspect of things wasn’t as good as it was promoted to be.

So with five years production and correction time, will Eden Games hit the nail on the head with the second current gen iteration of the long standing series? Or has the racing market moved on with the memory of a once respected racing title fading into the back of race fans’ minds?

With a recent influx of quality racing titles, it would be nice for the trend to be continued here and add to the healthy selection already on offer. Sadly though, there’s not much to write home about TDU2 as it all feels very familiar. Don’t get me wrong, some of the environments and scenery can look stunning and make you stop and stare in awe. But when it comes to the rest of the game (character models, vehicle models and houses) it’s full of jaggedy edges and stinted, awkward motions that make the game feel out-dated. Hand in hand with the lower grade graphics comes cheesy, contrived dialogue which some games can get away with, but in Test Drive it is just plain annoying. No two ways about it, by the time you have acquired your first licence, you will skip any dialogue with haste.

The sound isn’t much better either. Whilst the engine noise is strong and as far as trained gaming ears can tell, accurate, noises fade in and out at the wrong moments. When sat in the driving seat of a super car, you’d expect a revving sound to reverberate back at you off garage walls, yet all you get most of the time is a muffled and distorted whine. The radio is similarly annoying as the pre-set stations (there are only two to choose from by the way) are very much an acquired taste, and with no option to import a custom soundtrack, you’ll more often than not sit in silence whilst you drive around.

It would be harsh to not give TDU some credit where it’s due though, as there are some aspects of the game that shine through. First of all being that it is very easy to negotiate with a simply laid out menu system, something that many developers can’t hit on the head easily. Although, finding people to play with (friends or strangers) is very frustrating despite the game being based around social interaction between drivers. It seems that Eden Games have taken great care to make sure the minor features are there in number and work well, as opposed to focussing on the things that matter the most. For example, windows can be wound up/down and drop-tops can be converted at the touch of a button, yet the rest of the game does not meet the same high standards.

It’s important for any game of this generation to ensure that it gets its basics right, whether it’s a racer or a shooter, the core mechanics must work. Sadly, TDU fails to deliver anywhere near where it should when it comes to gameplay, making it more a chore as opposed to being fun. Even those who drive with full assists on will find it difficult to keep their vehicle on the road, regardless of whether they’re negotiating a tight hair-pin turn or simply overtaking a civilian vehicle. That’s once the game gets going and allows you to just get on and race, to me it just seems like there’s too much on offer here. There’s too much filling, too much to distract you away from the actual driving, which is no bad thing considering how poor it is, but a driving game is about exactly that; driving. Yes collecting houses, acquiring licences and exploring is all jolly good fun but not when it overwhelms the player and gives the impression that you will have to grind through to enjoy the game.

Your Test Drive career is rated through global points which accumulate to give you a global level, finding new shops earns you Discovery points, whilst buying new cars and clothes will give you Collection points. These are important as once you reach level ten, you can fly to Hawaii to retrace old tyre tracks from the previous game. Furthering the challenge here, your cars are fitted with a ‘FRIM’ device which stands for Free Roam Instant Money, in other words you are rewarded for dangerous, brave and/or stupid driving. For instance, sliding round a corner builds up money and if you follow this up with gaining air over a jump or just missing a civilian vehicle, this will chain the money and increase your reward. Hitting objects will break this chain though, so be careful to keep those drifts under control as hard as it may seem.

Another new feature present is that of giving you the opportunity to exit your vehicle and explore some of the world on foot, although there are few places where this is possible. So before you splash out on your dream car, you have the chance to check out every curve and detail inside and out, and you can also admire the interior of the houses/garages you encounter on your travels. This is good and gives you a bit of freedom, but most of the time it feels pointless as you’re limited to indoor environments and you can select most of the objects you’re pointing at from the other side of the room, so why not just have a scroll-through menu?

To begin with, Test Drive seems utterly pointless if you linger on its shortcomings, yet if you’re the sort of person who likes their games’ bugs and glitches and can trawl through a near un-enjoyable title, then you could potentially spend a long time driving around in ‘paradise’. Unquestionably, there’s a lot to offer here with shops to discover, hidden locations to find and all this can be done alone or with a group of friends online. The option to play competitively or co-operatively elongates TDU’s longevity as blasting away from your rivals earns you money, whilst travelling the island and exploring will earn you points and boost your rank.

No matter how hard you try and deny it, you can’t help but feel that Test Drive Unlimited 2 is a let-down at every turn, especially since it takes about an hour before you can even begin playing the game with online updates and data installation. Any game released on PS3 these days should not suffer from patchy textures, gradual environmental appearance or a core mechanic that fails to live up to its rivals. Given that this game has potentially been in development for five years, it feels as if Eden Games has woken up with a year or less before release and realised they have to begin work on it. All in all this is a title that will test the best of gamers’ patience and will take them down a very long and straight road.

Atari did an excellent job of producing a racing title that coincided with the release of the Xbox 360 but sadly they have not followed it up with a sequel of the same ranking. Troubled with control issues, low-level graphics and a less-than-helpful online mode the games potential success was limited before it even launched. For those who loved the first game, they might see through its flaws and find a better game underneath but for the rest of the gaming world; they would do well to avoid it.