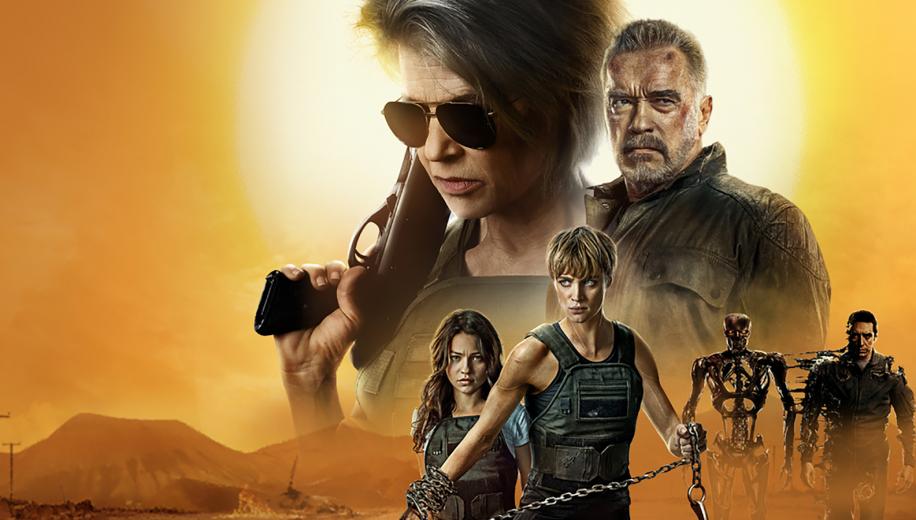 With all the lowered expectations from previously being burned, Dark Fate should come as a mostly pleasant surprise; a competent, tense and aggressive Terminator sequel.

Cameron's 1984 The Terminator was a stunning sci-fi spin on a serial killer horror movie, propelling star Schwarzenegger into the limelight and cementing the director's standing as a capable filmmaker. Seven long years later and Terminator 2: Judgment Day was the Aliens to The Terminator's Alien - that rare sequel where fans actually argue over which one is better - in many ways surpassing the original, redefining its heroine, Linda Hamilton's Sarah Connor, in a way not dissimilar to Sigourney Weaver's evolution from those aforementioned Alien chapters. With rights finally reverting to James Cameron, but no time for the Avatar sequel-obsessed director to actually take the helm himself, Terminator: Dark Fate was commissioned under the hand of Deadpool's Tim Miller, returning classic cast members to the fold, ignoring the events of every sequel since Judgment Day, and attempting to work in some Force Awakens magic into the franchise which has been floundering like a Frankenstein's monster that just won't die for almost three decades.

Dark Fate gets off to a great start, with an almost dream-like nightmare of a prologue that attempts to set the tone from there on out. It's a shot in the arm that the franchise needed, and as we cut to the present day and follow the dual trail of bodies that both hunter and saviour leave in their wake, there's some nice flashbacks to the old, classic, Terminator movies which make you feel like this is on the right track. Trailers always give away way too much, but the early vehicular chase sequence is superb, and establishes this new Rev-9 Terminator as someone who audiences will genuinely believe is unstoppable. That's a feeling that has been largely absent since those first two films.

Dark Fate, despite being a Box Office flop, has done the impossible in fitting in closer to those first two all-time classics

Mackenzie Davis is tremendous as the resistance soldier, augmented and sent back to protect the new target; battered, scarred, and battle-damaged from the outset, and not without her own vulnerabilities, it's a nice new character, and Linda Hamilton makes an inspired return to the fold, much like Jamie Lee Curtis did to great effect in the recent Halloween sequel, with the weak choice being Natalie Reyes young target, completely failing to convince as competent in one vital key sequence.

Miller also delivers some of the best action sequences of the decade, although it feels a little like they forgot that less is sometimes more, with the need to satisfy blockbuster appetites clearly great in this one. Nonetheless Dark Fate, despite being a Box Office flop, has done the impossible in fitting in closer to those first two all-time classics. It is not woefully geared up for its own 'trilogy', like Genisys, nor is it locked in its own little universe, like Salvation, and nor does it overtly retread the beats of the first two classics, like Rise of the Machines, other than to celebrate them, develop them and run with whatever they can muster in a story set 27 years later. Sure, it has flaws, and probably therefore sits somewhere between a 7 and 8, but it deserves a nudge for having done what a lot of other franchise resurrections have ultimately failed to do - The Predator and Prometheus/Covenant to name but two - and give us something new that works and doesn't merely insult everything that came before. Still, it's best to keep your mind on the myriad lows of the last few films, then maybe Dark Fate will be more likely to remind you more of highs of the first two.

Having recently seen the godawful HFR presentation of Gemini Man, the opening shots of Dark Fate were fleetingly concerning but only because they look so damn impressive, with a stunning look at water slowing washing across pebbles (or are they?). It's a Revenant-like quality which belies the 2K upscale supporting it, and sets the scene for a fantastic blockbuster presentation which is often so good juggling CG that you don't notice it's there (the action sequences are beautifully serviced, allowing you to completely forget that most of what you are watching isn't even real).

Improving over the standard 1080p presentation, with fine nuances and richer texturing, it is a suitably filmic entry despite this razor-sharp clarity and superior detail, and is given a greater edge - as is always the case - by the use of HDR and WCG. Phased plasma rifles burst across the screen in searing neon blues and reds during the future war sequences, explosions buffet and boom with gorgeous oranges and yellows, and that classic red eye glow from Arnie's terminator is particularly penetrating. Black levels are solid and rich, with Grace's night-time landing leading to some great action that doesn't ever falter under the warm yellow-orange street lighting, and shadow detail is excellent, rounding out a presentation that is hard to fault and comfortably defies the ostensibly technical limitations of its 2K upscale source. Dolby Vision would have been the cherry on the cake, and gives the US release a slight edge, but this is still a stellar presentation.
﻿

Fox also deliver a stunning and intense Dolby Atmos track to accompany the piece; the same one which can be found on both Paramount's US 4K disc and its standard Blu-ray counterpart, so not technically an upgrade, although UK shores aren't so luck as Fox - much like their failure to port over Dolby Vision, don't bother delivering Atmos on the regular Blu-ray. Nonetheless, for the 4K disc it's an impossibly tremendous track, which marries up to the rollercoaster action that kick-starts with basically an extended chase sequence that largely doesn't let up until you're utterly exhausted.

A stunning and intense Atmos track

Dialogue remains firmly prioritised across the front and centre channels, delivered with clarity and coherence throughout, whilst the score - albeit not quite using enough of those haunting signature tunes from the previous entries - does a solid job following the threat-factor-10 impetus of the piece. Effects are where it's at, as you would only expect, buffeting you with LFE when the portals open, or during the traffic-smashing freeway chase, bringing impact to the blunt force trauma inflicted on the various future warriors, even before an array of weapons light up the soundstage. Even the sickly slicking sound of the blade arms that the antagonist forges and wields is given some rich prominence on the track, turning horror as he tears through his victims to get to his target. It's a superb demo track.
﻿

Whilst none of it gets ported over to the 4K disc itself, the accompanying Blu-ray contains a few decent extras, including a trio of pretty hefty Featurettes which total an hour of background material alone.

A Legend Reforged spends over 20 minutes looking at the efforts made by director, cast and crew to realign this franchise - along with Cameron behind the scenes - whilst World Builders takes half an hour to detail the key action sequences, looking at locations and staging of the setpieces; there's also a shorter piece dedicated to the finale, and the extras are rounded off by a VFX breakdown from the future sequences and six Deleted and Extended Scenes.
﻿

Terminator: Dark Fate may have put the franchise back on track, but don't expect anything more from this universe anytime soon - the Box Office has spoken, and this will likely be the end of the franchise as we know it, and have known it, and certainly the last we'll see of Arnie's fan-favourite T-800. It's a shame, in a way, but it's a much better way to go out than Terminator: Genisys, righting a lot of what once went wrong, and giving us a modicum of hope in whatever the Terminator future may hold.

It's best to keep your mind on the myriad lows of the last few films, then maybe Dark Fate will be more likely to remind you more of highs of the first two

Fox's UK 4K Ultra HD Blu-ray release delivers utter reference 4K video - despite the 2K upscale source - and a reference Atmos track to boot, as well as a number of nice extras which round out a largely excellent package. If you're a Terminator fan disheartened after Genisys, then this is a much better way to round out your set, and a superb release to add to your collection - although if you've got Dolby Vision capabilities, you might be tempted by Paramount's DV-enhanced US release instead...