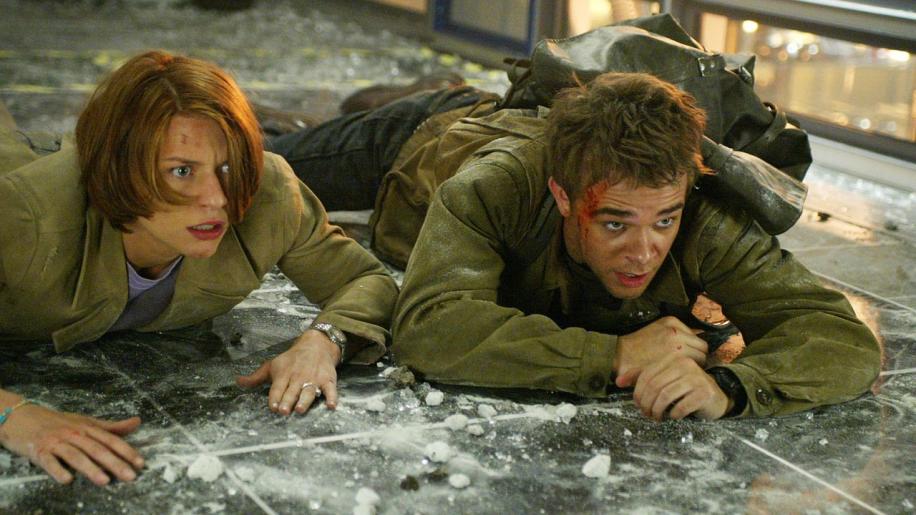 Presented in 2.35:1 anamorphic widescreen, Terminator 3 is an excellent example of a well-mastered DVD. The transfer is nigh on reference quality with images razor sharp, offering up plenty of fine detail, even in scenes containing a lot of shadow. From the opening moments this impresses, and the view from the sky before the first nuke drops is stunning, with the cities beneath revealing lots of detail that could easily have been a mess.

The shots where we see Arnie's battered face look wonderful, with the intricate mix of flesh and metal rendered with great definition, and it comes as a relief that edge enhancement doesn't spoil it. Speaking of edge enhancement, it is apparent, but it's slight even on a big screen and never detracts from enjoyment. Only on the opening titles and when text appears onscreen does it become more apparent, but that, in the big-scheme of things, is forgivable.

Colours too, look wonderfully authentic. As we move through the key scenes the colour palettes change accordingly, and whether it be the cold sterility of the military base or the warm dusty desert, the colour tones come through bold and solid with no perceivable blooming.

The print itself is - as you would expect - free of any scratches or dirt, and barring a couple of brief instances of grain, this is a superlative video transfer.

The layer change is positioned around the 54:00 mark, and although not in an action sequence, it's still slightly clumsy.

Presented in 448kbps Dolby Digital 5.1 only - you need to buy the Region 3 version for DTS - the opening moments of Terminator 3 will shake your listening room to its foundations. The nuke flies over your right shoulder before impacting in the centre of the screen, and the resulting shockwave is enough to make most subwoofers sweat. Indeed, sub 20hz bass features strongly throughout the running time, with the action underpinned effortlessly by tight, impactful bass. Explosions will rock the entire room, and Terminator punches are delivered with an almost bone-crunching depth that will have bass freaks everywhere grinning (see the graveyard chain gun scene for the most gut wrenching bass in the movie). Bass isn't just confined to the action, either, as incidental music is accompanied by thrumming, deep bass that is felt more than heard. Superb, reference quality stuff.

Imaging and steering are spot on too, with dialogue coming through cleanly, and all 3 front channels used effectively, and the panning effects from front to back and left to right being executed with fizz and energy. Witness the moment where Connor and Brewster are in the military complex and the prototype Skynet fighter hunts them in the corridor: the sound of the rockets firing and the fighter flying are superb, with pin sharp steering and placement, using all 5.1 channels.

The surrounds are used effectively throughout, with great effects placement and additional weight added to the many action scenes. Ambient sounds are apparent too, with the aftermath of the graveyard shootout being a deathly silence that's punctuated by almost comical chirping birds in the surrounds.

This is a well mastered, almost transparent audio transfer that's pretty much reference quality, and perhaps the only disappointment is that the trademark “Terminator music” is sadly absent until the end credits roll.

On disc one we have 2 audio commentaries, the first featuring the entire cast and the second being a solo effort by Jonathon Mostow. The group commentary wins hands down of the two, with everyone commenting at various points about their own roles, the production etc, although it's worth noting that each of the individuals was recorded separately. This is a shame, as it lacks the conversational quality that many of the best commentaries possess, but it's still better than Mostow's effort, which although more informative, feels rather flat by comparison. Also on disc one we have the theatrical trailer, which is presented in anamorphic 2.35:1, and features Dolby 2.0.

From here in on in the extras take a bit of a nose-dive, as disc two really is a waste of space. Arnie's introduction doesn't really bode well *yawn*, and true to form the HBO first look documentary (24 minutes) is a typical puff-piece which shows far too much of the movie and not enough of the interesting “making of” shots. Things take a bizarre turn with the Sgt. Candy Scene (it really is pointless, if anyone can work out why they included this, then please let me know), which is more Starship Troopers than Terminator.

The gag reel is too “produced” for my tastes, and the music is incredibly annoying, with f too few scenes that are funny. The “T3 Visual Effects Lab” is vaguely more interesting, breaking down a number of key scenes from concept stage through to execution, and this includes a feature that - according to the blurb - allows you to “build your own eye-popping action sequences”. And yes, it's nowhere near as good as it sounds, with the options for replaying scenes severely limited.

Also on offer is a storyboard comparison which runs the storyboard side-by-side with the action onscreen (again, nothing we haven't seen before), and rounding off the package is the very short Dressed To Kill feature (costumes), a dire Toys in Action piece (only of interest to toy collectors and willing victims of movie merchandising), an uninteresting Making of the Video Game short and trailer, and the Skynet Database. Finally, we have a Terminator Timeline section for anyone who's confused by the timings of all three movies.

It looks like there's a lot, sadly it's more a case of quantity over quality, with the majority of disc two being a pure marketing exercise.

If you love mindless destruction and outrageous action sequences then this could be a DVD for you: although Terminator 3 doesn't even come close to working out your grey cells, this offers a superb video and audio presentation with the extras being the only disappointment.