But will it be back again in 4K? 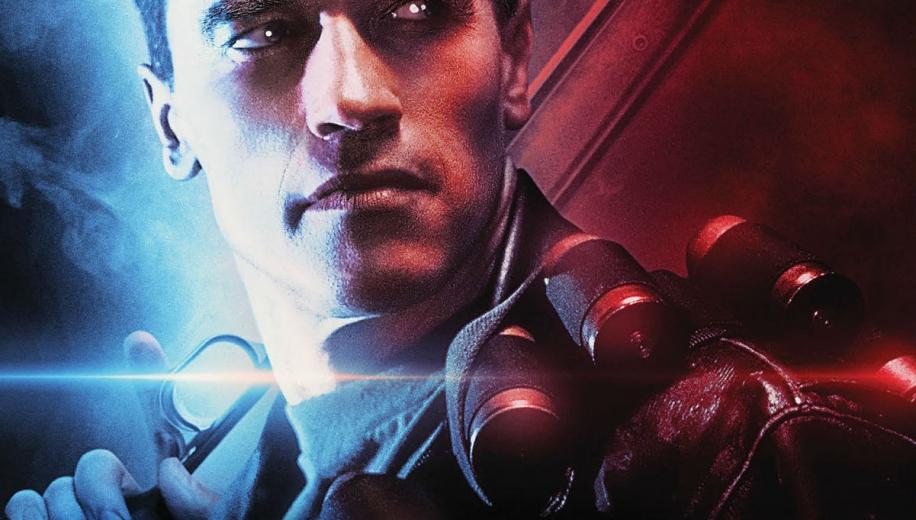 Terminator 2 sits alongside Aliens and Godfather 2 in that elite list of sequels capable of being considered better than the first films.

James Cameron transmutated Ridley Scott's haunted-house space horror Alien into more of a war film with his action-packed sci-fi horror sequel Aliens, and did much the same thing with his own work on Terminator. The first Terminator film was pure horror - aside from the sci-fi angle, the nightmarish, unstoppable monster could have easily been swapped for somebody like Jason Voorhees - but for the sequel he went for a much more conventional action-based thriller, which still had horror themes (the entire asylum sequence), but was bolstered by a superb character-twist of having Arnold Schwarznegger's antagonist from the first movie switch to play the heroic protector in the sequel.
Although Cameron's sequel isn't flawless - it's got more than it's fair share of cheesy moments that have dated somewhat - it is a surprisingly hard-edged sequel given it was playing for a wider, younger audience, and it's packed to the brim with quintessential classic action movie moments that simply don't get better than this. It's genius, with a perfect villain in the upgraded T-1000 (somehow even more unstoppable than Arnie's Terminator), whose then-pioneering effects are still scarily innovative, a great upgrade for Linda Hamilton's Sarah Connor (again, much like what Cameron did with Sigourney Weaver's Ripley), and Arnie himself in his element. An absolute classic.

This much-revered sequel has had numerous home format releases, including several on Blu-ray, but none have been without their faults. Unfortunately this latest release doubles-down on much of what was done before, at least in terms of scrubbing it clear of grain, possibly a side-effect from the recent 3D re-release (the argument being that a cleaner, grain-lacking image is easier to post-render in 3D) or maybe, just maybe exactly what James Cameron wants his 1991 classic to look like in 2017.

There's no denying that this is an unconventional video presentation. It flies in the face of everything cinephiles and audiovisual purists want from their restored classics, namely, a rendition of the movie not only in the best possible condition but also in the best possible condition faithful to the original presentation. On that basis alone it is completely understandable, and justifiable, that the presentation has been utterly lambasted from almost every corner. But, as is often the case with even the most controversial presentation, there is a counter-argument. Playing devil's advocate, it could be argued that not only is the presentation up to the director (and not, unfortunately, the fans) but that this presentation isn't a mistake. They didn't accidentally press the red button and scrub the film clean just before sending the disc to be printed. It could be argued that James Cameron, who is the kind of 'pioneering' director keen on embracing the latest cutting edge technology even before it's ready to use, took the best available tools and turned his 1991 film into the best approximation of what it would look like if shot digitally today.

You see, this isn't a Predator waxworks job. The native 4K video presentation here hasn't been scrubbed of detail (at least for the most part). It's been predominantly scrubbed of grain, and that's a fine distinction. There is actually plenty of striking detail on offer here, sometimes in areas which you likely would have never noticed it before. The fine blonde fuzz of facial hair on Linda Hamilton's face in close-up when she's doing pull-ups; the reflections in the sunglasses during the motorcycle/truck chase sequence; the intricacies of the hair on almost everybody's head; the authentic rippling texture of the bullet holes in Arnie's leather jacket. The list is almost endless. No, the picture is brimming with excellent detailing, it just doesn't have any organic grain and thus doesn't look anything like it did back in 1991.

Excessive sharpening and haloing is present, although the term excessive is probably unnecessarily inflammatory, as the instances where it impacts your enjoyment of the film are almost non-existent, with it possibly coming across as a holdover of the prep-work done for the 3D release (to delineate objects and characters so that they can pop better), or perhaps just an over-enthusiastic application of the digital tools at hand. As stated, it's present but, depending on your sensitivity towards these kinds of anomalies, potentially not a significant issue at all.

Then there's the colour scheme where, again there are changes that are either mistakes or possibly stylistic choices on the part of the director. These are much more subtle, with many reviews making it sound like this is some revisionist look a la The French Connection. It simply isn't, and often unless it's pointed out you won't even notice. And, of course, the HDR implementation is pretty exceptional - something which often gets lost in all the hyperbole of just how 'bad' this video presentation is. From the red glow of Terminator-vision, to the electric blue of the flashback to the future-war, to the practical effects where the explosions have never looked this vibrant. During the viaduct chase at the outset, it's not just the fireball truck explosion which looks stunning either, look instead at the reflection of the inferno upon Arnie and his ward aboard the Harley. The living, breathing orange glow, and reflections on the gun barrel and sunglasses, look superb. Even little things like the Afterburner game in the arcade - look beyond it to the blue neon strip lights bridging the arcade and they positively glow. The HDR usage is exceptional on this film, considering its age, and between that and the WCG it's a very vivid picture.

Cameron's tweaks to the content also impress - unlike Lucas's - leaving those moments where Arnie's stunt double was visible (as well as a couple of other goofs) cleverly corrected. Back in the days of VHS it wasn't an issue, but as screens got bigger, and pictures got clearer, these things became more and more of an issue, so it's actually commendable that he took the time to correct them.

Clearly this is a controversial angle on the video presentation - it is, as stated, a devil's advocate argument - and as such many fans are going to shoot it down in favour of what they ideally wanted; that organic, original, faithful video presentation. This is completely understandable, and is arguably the way that every film should be restored. However, the style of Terminator 2's modern 4K presentation actually has some striking benefits - impressive HDR implementation, surprisingly fine detailing, and a clean digital look with leaves it easier to stand on par with modern blockbusters. Of course there's no reason why it should need to stand alongside modern digital blockbusters, but, perhaps, that's just what Cameron wanted it to look like for it's 4K bow. And, if that's the case, this may be the 4K release that fans have to deal with.

Although there's no immersive object-based audio track in the form of Dolby Atmos or DTS:X on offer, at least few are going to have anything to complain about when it comes to the DTS-HD Master Audio 5.1 track even if, as far as is discernible, it appears largely identical to the lossless track that adorned the Terminator 2 Blu-ray re-release (which, itself, was an upgrade over the lossy track on the first release).

Dialogue is given clear and coherent prioritisation across the frontal array whilst the memorable score gets superb range and dynamic weight, right from the iconic opening credits sequence. Effects are finely balanced and get enough LFE input to give them tangible weight too, with some discrete dissemination across the array during the more expansive pyrotechnics, although the score is so much a part of the effects (from the incessant moan associated with the T-1000 to the more heroic tones afforded Arnie's saviour) that it almost always takes precedence. No complaints here.

Whilst it's no real surprise to find that there are no extras adorning the Ultra HD Blu-ray disc (although lazy it's pretty common practice these days, and happened in the early years of Blu-ray too), what is a real shame is the lack of integrated alternate cuts on the Ultra HD Blu-ray disc itself. Seamless branching could have (and easily has, on other Ultra HD Blu-ray releases) been implemented here to allow for access to the 16 minute longer Special Edition Version and 19 minute longer Extended Special Edition Versions, both of which are present on the accompanying Blu-ray (along with the Theatrical Cut), and it's arguably this lazy omission that speaks more towards the likelihood of a later re-issue than any of the controversies surrounding the video.

There are a couple of old Commentary tracks available (a Director and Co-Writer track and then a further one with almost two-dozen participants from the Cast and Crew, edited together), as well as an archival half-hour Making-of Featurette, a brief couple of Deleted Scenes with optional Commentary, and a new hour-long Documentary T2: Reprogramming the Terminator which is the most comprehensive and interesting of the bunch. The disc is rounded off by some Trailers.

In many respects an upgrade over the Blu-ray

It's a shame that one of the greatest sequels of all time, and a movie that likely makes many Top 100 films of all time lists, generates quite so much controversy on what should have been a universally celebrated native-4K Ultra HD Blu-ray bow. Whilst it's almost an equally controversial stance to take, there is some merit in playing devil's advocate and still celebrating the benefits of this 'new look' that Cameron has given his 1991 classic, even if it directly contravenes everything that fans expect from a faithful remastering of such a beloved film. Certainly it's understandable why many are steering clear of this release (the lack of optional, seamlessly integrated, alternate cuts is, in some ways, even more unforgivable than any stylistic choices implemented), this may well be all that fans have to work with for a good few years to come, and is in many respects an easy upgrade over the Blu-ray, so if you can find it for a reasonable price then try not to let the furore put you off checking it out for yourself.