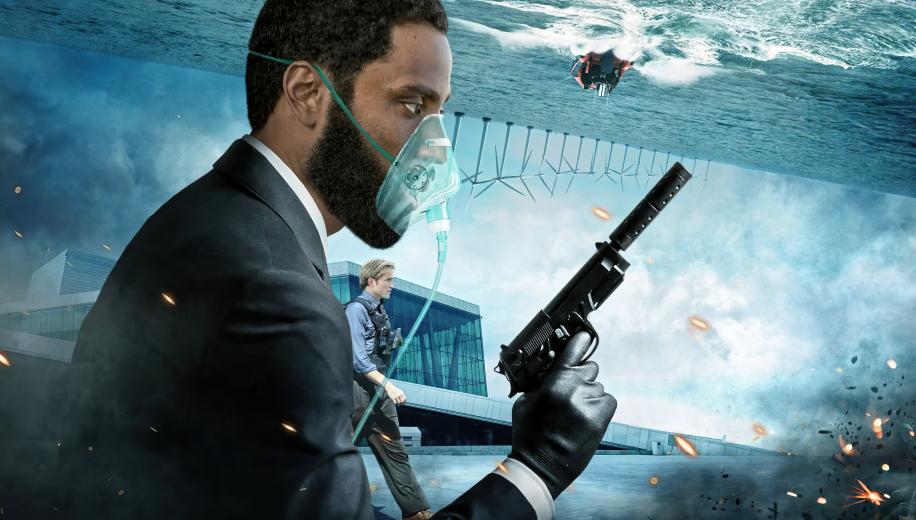 Nolan's latest remains suitably epic and tremendously Bond in moments, but also painfully convoluted, and frustratingly obtuse, robbing viewers of a completely immersive, engaged ride, and sapping tension as a result. But damn if it's not the biggest scale event movie of 2020 and an utterly unmissable ride.

He's had a hell of a career. In 20 years we've had everything from Memento, Insomnia, The Prestige and Dunkirk, to The Dark Knight Trilogy, and his tour de force mind-and-time-bending masterworks Interstellar and Inception. Obsessed with time, his latest was reportedly decades in the making, and with rumours of it being a spiritual sibling to Inception, expectations were unsurprisingly high.

Certainly Nolan goes all-out to embrace his temporal trademarks, taking you on a mind-bending, brain-breaking paradoxical palindrome of a journey that is as unique as anything else he's ever done. It sits right up there with Inception and Interstellar in terms of high concept insanity, and comes complete with Dark Knight Rises / Interstellar levels of booming bass and borderline incomprehensible dialogue. His setpieces are tremendous, and this is pure, utter, sheer Big Screen entertainment at its best, but it's not quite Nolan at his best, lacking the heart we have come to expect from him.

Has Nolan gone too far? It's probably a question many will ask after having seen this film, which has unsurprisingly generated a degree of marmite reactions, both critically and from audiences. It's a very clever movie, stitched together seamlessly no doubt, but it will barely make a jot of sense on a first viewing (you can put together stretches of the narrative, but only hazily, without a great deal of 'ah, yes' to it), and even on a second viewing it still remains frequently elusive. And it feels a little like Nolan has spent so much time - years perhaps - fashioning a plot that quite literally works back-to-front, that he's forgotten that he needs to give people a reason to go on this ride. Well, other than... 'it's a Nolan movie'.

On a Bond level, it's largely exceptional work

Inception had DiCaprio desperate to see his kids again, a heartbreaking backstory involving his dangerous enigma of a dead wife; Interstellar had the father-daughter relationship at the heart of its painfully effective "You'll be older than me when I next see you" arc - whilst Dunkirk had the excuse of the War to act as motivation in its more forgiving, lean duration. Here, the threat of a Third World War should be an equivalent drive, but it's a long ride, with Nolan so very bogged down in unfolding an impossibly intricate plot, that he completely forgets to give any of the characters a reason to be there in the first place - and you a reason to care.

Still, on a Bond level, it's largely exceptional work - with John David Washington (close your eyes, and it's his father Denzel all the way) a superb proto-Bond, effortlessly charming, witty, and absolutely assured in his hand-to-hand dispatching of henchmen (the kitchen scene is pure Bond). Debicki appears to be auditioning for a Bond girl too, at least one for the modern age, gifted a strong character with possibly the best arc, and her electrically tense scenes opposite Kenneth Branagh (rocking another fairly effective Russian accent) are certainly a highlight. Pattinson is basically Tom Hardy's character from Inception ported over to this movie, complete with posh Brit accent, but he makes for an excellent companion, and infuses the part with subtleties that reward a rewatch more than anything else. Branagh is better than any Bond villain we've had since Casino Royale, and truly menacing, on both a personal and global level. Certainly his motivations are much more personal - and thus more compelling - than those of Washington's protagonist. But Nolan doesn't really have time for more than his dense plot, which he chooses to try to explain in several scenes of barely comprehensible monologuing where he appears intent on convincing us to go along with an insane, impossibly convoluted story, and profess at every stage that 'this makes sense'.

Ignoring making sense of it all, you can still go along for the ride, and boy, what a ride it is. The opening set piece is fantastic, exceptionally tense, the India raid impressive, even the boat race is epic in scale, and that's even before he pulls all of his innovative tricks out of the bag to 'invert' everything you might expect from a Matrix Reloaded-but-for-real car chase or a straight-out-of-Bond grand finale. It's stunning Big Screen insanity, all set to another tremendous score from Ludwig Goransson (The Mandalorian), and it's only robbed of a place alongside Nolan's masterworks because it just doesn't have the same weight come that final act. Rewatching reveals secrets, but it still doesn't even come close to the multi-finale impact of, say, Inception, which remains the pinnacle of his works. He's an amazing filmmaker, but if he took a decade to figure out the plot to this, he should have spent a little longer figuring out a way for us to get behind it in two-and-a-half hours. Still, he deserves a hell of a lot of praise just for trying to bring cinemagoers back to the Big Screen and giving us the only film this year to really talk about.

Tenet was shot using both Arriflex and an array of IMAX cameras, on 65/70mm. The disc presents a native 3840 x 2160p resolution image in the shifting widescreen/IMAX aspect ratios of 2.20:1 and 1.78:1 for the IMAX sequences, and uses 10-bit video depth, High Dynamic Range, a Wide Colour Gamut (WCG) and is encoded using the HEVC (H.265) codec for HRD10.

A late entry, Tenet is a front runner for one of the best 4K presentations of the year. Even without the dynamic metadata of a Dolby Vision layer, we're looking at sheer picture perfection here - absolute razor-sharp detailing, stunning contrast, excellent HDR implementation, gorgeous WCG, it's utterly spectacular from start to finish.

The fine lines on Branagh's visage, or Washington's beard; the bullet-hole damage dusting its way back to life, the clothing weaves, background textures, damn there's just no end to how much gorgeous nuance and detailing there is on offer here, with a thoroughly filmic, textured look throughout that remains clean but organic and celluloid throughout.

WCG and HDR afford excellent peak highlights and rich inky blacks, the perfectly calibrated contrast leaving each individual shot jaw-dropping, with just the right amount of shadow, whether in the sun-drenched exteriors, reflective yachting scenes, yellow-cast Mumbai nights, or military-grade intensity of the inversion-chamber sequences. It's perhaps only there where a few might stare hard at those impossibly profuse reds which look like they might be bleeding around the edges, like they might be on the cusp of yielding due to the sheer intensity - and even if there are fleeting moments where you think that might be the case, there's so much glorious colour work done during even just these shots, with the characters bathed in deep emergency light reds, that you'd forgive any stepping over the line. Black levels are excellent, and this is just across-the-board picture perfection.

If you thought the soundtrack on Blade had a fabulous amount of bass, Tenet redefines the word, tearing through your living room with an intensity that will disturb even the most tolerant of neighbours and realign the molecules within your body. What's that you say? It's not Atmos? Sorry, nobody can hear you above the sound of one of the loudest and most tenaciously absorbing soundtracks of the year. DTS-HD MA 5.1 it may be, but Atmos is going to do you no good once you've been suitably deafened by this track. And if the rumours are accurate that Atmos track creation has specs that don't go below about 30Hz, then maybe we should be grateful that we didn't get the full object-based upgrade, because this would have been one hell of a disappointment if even one iota of this bass-laden track had been cut off at the knees.

Thankfully, somehow, miraculously, even if Nolan has played deaf to the outcry from cinemagoers for the last four of his major releases at the cinema, the dialogue at home is actually reasonably intelligible. Sure, fans will want to pop the subtitles on to make sure they don't miss anything, and even if you think you're catching it all, you'll have a few 'aaahhh that's what he said' moments if you do watch it with subtitles, but it is no longer a frustratingly garbled hot mess during key dialogue scenes like it was at the cinema. On the Big Screen it wasn't just the action, where you can almost understand the decision, but even just a couple of people having an exposition meeting appeared to require INFINITE BASS as their scoring backdrop. Here it's still occasionally garbled, but a lot more balanced, even at close to reference (if you actually hit reference, you could cause some structural damage, so beware).

Effects are absolutely thunderous. Not just the gunshots, which positively startle with their penetrating intensity, but even the brutal kitchen sequence where every single blow laid appears to come with the kind of sound effect Hulk should make (well, if Disney didn't employ Atmouse). The score is as good as you'd expect from Nolan, utterly integral to the proceedings, percussively carrying you through early setpieces before they unleash more of a running motif across the rest of the duration (perhaps only falling over when it comes to the final song track which is surely going to date very badly). Sure, you could mark it down for any dialogue issues, but you should really blame Nolan for that, not the audio track on this disc, which is technically perfect and utterly spectacular.

Tenet comes in a 3-disc set, with 4K, film Blu-ray, and a dedicated extras Blu-ray, remaining bare bones for those first two, but packing a feature-length multi-part Documentary onto that dedicated extras disc, which should satisfy any fan wanting to learn more about the production.

Looking at the World in a New Way: The Making of Tenet – Split into over a dozen bite-sized mini-Featurettes, each running about 5 minutes in length, this whopping, feature-length offering clocks in at over 76 minutes in total, and cover the casting, story structure and continuity, set design and cinematography, locations and costumes, music and all of the key setpieces across the duration.

Trailers - There are a few teaser trailers also to round out the disc.

Christopher Nolan, love him or hate, still delivers stunning Big Screen entertainment on a blockbuster scale in a way that very few - if any - filmmakers are given the opportunity to beyond the realms of the likes of the more traditional Hollywood franchises out there which these days, excepting the excellent Mission: Impossible series, and the entertainingly overblown Fast and Furious films, are almost always of the superhero variety. Sure, this might be one convoluted step too far, even for Nolan fans, but it's still blisteringly BIG entertainment.

Warner's UK 4K Ultra HD Blu-ray release of Tenet is the cut version, to warn those who desperately need an extra few seconds of kicking-a-woman-on-the-floor to hammer the point of that one scene home, but otherwise boasts stunning native 4K and IMAX-scene-laden video and utterly spectacular BASS-HEAVY audio to boot (with slightly more comprehensible dialogue!), as well as a dedicated extras disc packed with a feature-length multi-part Documentary dissecting this monolithic endeavour. It is an utterly unmissable 2020 event film, and comes highly recommended.