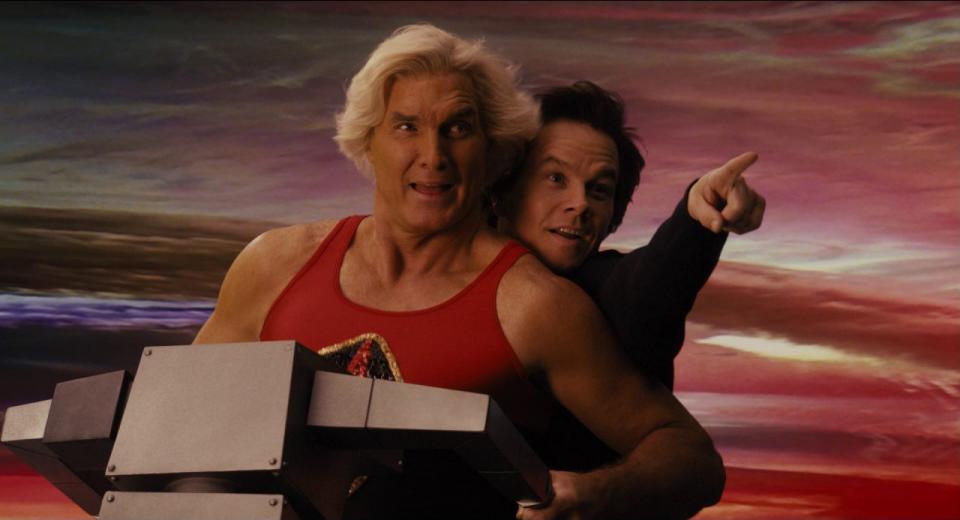 Overall, this film looks pretty good. The animation is first rate and the limited use of green screen helps to keep it real. Originated digitally in 1.85:1 ratio, the picture is almost noise free and the AVC-MPEG transfer has been well executed. The main thing that lets the side down is the lack of low level black detail. On far too many shots the dynamic range is simply not there and the darker colours end up mushing into black all too readily. Not as bad as some releases – “The Great Dictator” is another movie let done in this respect but to a much worse degree, but it is hardly cutting edge picture quality, more like a TV movie than cinematic release.

The CGI is a major part of this film and although animating a teddy bear does not sound outwardly difficult when you consider some of the things the animators are capable of these days, producing a natural looking toy is actually quite tricky. Ted also has to interact with his surroundings and this is an added complication. The preferred method of animation in this film has been to fit Seth Macfarlane with a lightweight motion suit and let him physically act just out of shot alongside his co-conspirators. Along with capturing dialogue in real time as well, the mannerisms have transferred across well.

In all other respects, this film looks pretty good. Colours look natural and the grading has been executed to a high level, giving individual scenes their own look. The streets of Boston look nice and grimy while the Flash Gordon parody is absolutely spot on, wobbly sets and all. If only the blacks were not quite so crushed. Walter Murphy is Family Guy’s resident composer and his score for this film is extremely strong. The big band and laid back jazz arrangements compliment the pace perfectly and lend an air of quality to the film as a whole. Interspersed with this we have not only many of the most iconic songs from Flash Gordon but also Norah Jones, Tiffany, Raiders of the Lost Ark and not forgetting Mark Wahlberg. One of the best scores I have heard this year.

The audio stream is contained in the now pretty much standard DTS-HD MA format and sounds superb. The full bodied score never buries the dialogue or ambient effects but there is not much in the way of earth shattering explosions to have you jumping behind the sofa. The surround sound mix quite subtle, with plenty of ambience and additional effects to immerse yourself in. There is nothing here to upset or test your system to the max, just a nice pleasant movie to listen to. We get a nice selection of extras here, plus both the theatrical and “Unrated” extended cut. The main differences between the two are a number of extended scenes, including the opening Christmas morning, songs and some of the improvised dialogue is less heavily edited for language. I watched both and there is little to choose between them. If you have an extra ten minutes to spare, stick with the longer and ruder version.

Other extras include a commentary featuring Mark Wahlberg and Seth Macfarlane. This is very funny even if they do wander away from the movie quite often!

The more traditional extras are as follows:

Now for a few issues: The scene selection is OK, but the thumbnails are a little small and difficult to make out. There is no form of text back up either as you get with some discs, so this all gets a little wearing after a while. The resume feature does not appear to work either. Just stopping the disc is enough to make it lose its place, doubling the annoyance over the scene selection issues when trying to get back to your place. A really funny movie that is well written and competently directed by Seth Macfarlane. It may be vulgar, rude and very un-PC, but look past this superficial rudeness to discover what this film is really about. It is almost like Macfarlane felt he had to add in the shock laughs to make the film a commercial success. Whatever the reason, the fact that most of the bad taste is uttered by the cute teddy bear means he gets away with it. The animation is first rate and the interaction with flesh and blood one of the best to date.

Technically the most outstanding part of this film is the soundtrack. It features a really nice full blooded sound track, pin sharp dialogue and a very pleasant and subtle surround sound track. The picture is fine, but the crushed blacks in some shots let the side down a little. This and some of the puerile humour really are the only complaints on what is an excellent first big screen directorial debut for Macfarlane.