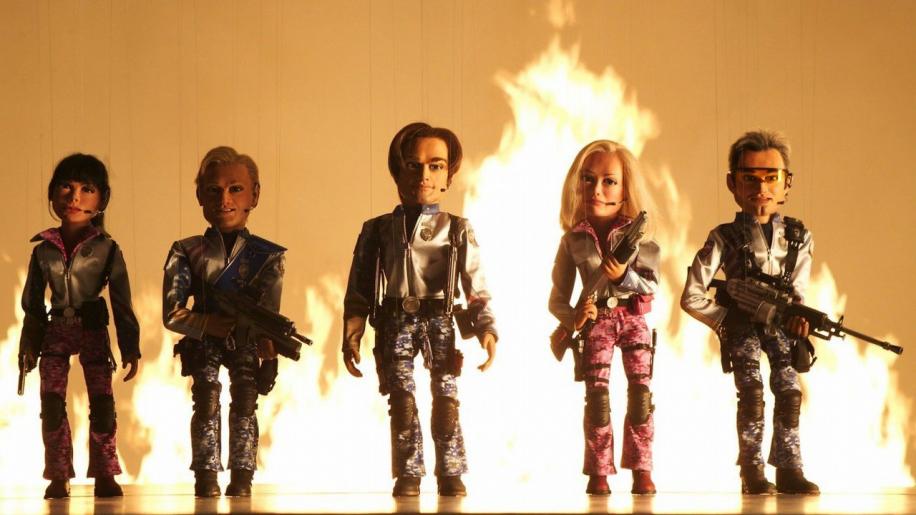 An excellent widescreen presentation with clear, well defined colours. Paramount have really worked hard on the picture with no kind of artefacts or bleeding present. The film is a colourful affair with all kinds of explosions and desert scenes. These could have been an encoding nightmare, but they have turned out just fine. Blacks are deep and rich when evident. A good all-round disc.

A puppet movie with a soundtrack that would rival a bid budget Hollywood action film, that's what we have here. Explosions and gunfire rip around the surrounds and the great musical score (including the theme song) is encoded well into the soundtrack. Dialogue comes mainly from the centre channel and is clear and audible.

Not content with a great picture and sound, Paramount have given us a massive selection of extras. There are six animated storyboards, which go through key sequences in the film complete with basic sound effects. There are also some deleted/extended scenes which don't really add to the film in my opinion. Also, some outtakes are in there as well, again nothing really special. These are in widescreen, but not anamorphic sadly. Paramount have also given us some test footage of the puppets, this is interesting as it shows the puppets being tested on sets and in the real world. A real insight to the creative process.

'Up Close with Kim Jong II' is a short featurette where the film-makers discuss the challenges of making a comedy character out of a world leader. 'Miniature Pyrotechnics' discuss the explosion effects in the film. 'Capturing the Action' profiles Photographer, Bill Pope who also shot The Matrix.

'Pulling the Strings' features the Chiodo Brothers (Killer Klowns) and their marionette skills. 'Crafting the Puppets' shows the skills of the puppet makers and how they go about their craft. 'Building the World' covers the production design and the simply brilliant model work. Finally, Parker and Stone discuss the beginnings of the film in 'An Introduction'.

Buy this film now. It's got everything you could want in a DVD. Great film, good sound, excellent extras and if you shop around online, cheap as well.