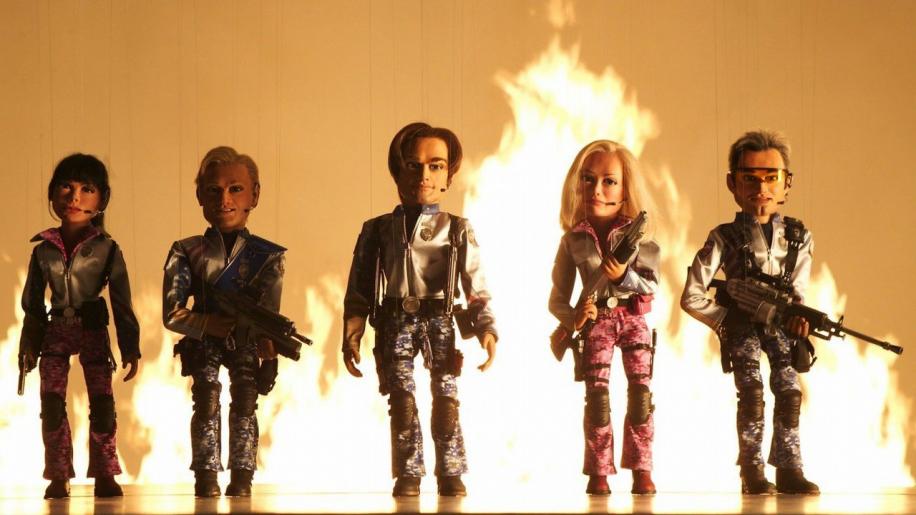 Team America comes in a tremendous 2.35:1 aspect ratio anamorphically enhanced widescreen transfer that perfectly suits its Bruckheimer-style mockery. The picture is fantastic, with great detail throughout, very little softness and negligible edge enhancement. The colours are excellent, with a very wide palette that is always represented accurately and decent, solid blacks. There really are no complaints with regards to this transfer - especially when you consider that everything basically involves close-ups on puppets and miniature sets. Sure you can see the strings - but that's the whole point! It is a fantastic transfer with few faults and no print damage - just the quality you would expect from a 2004 production.

The main track is a splendidly rich Dolby 5.1 effort. The vocals are clearly presented from the frontal array and the brilliant score just sucks you into the film from every angle. During the many brilliant song sequences the speakers really come alive - including the LFE channel - and the special effects provide from some real whiz-bang noises and even a little more bass. It is a riotous audio track with crowds cheering, huge explosions and brilliant montage songs - and it is perfectly suited to the movie, hitting the mark in every way. I know that DTS is supposed to be better but, although there is no DTS to compare here, this is one of those Dolby 5.1 tracks that really seems difficult to upstage. There is also a less well-rounded but nevertheless decent Dolby 2.0 track and a dubbed French Dolby 2.0 track as well.

Team America comes in a feature-laden disc. For starters we get Team America - An Introduction, running at five minutes in length and featuring interviews with Matt and Trey Parker. They show some brief behind the scenes footage of the puppets, and introduce each of the characters and their concept behind the movie. Initially they thought it would be easy to make a puppet movie rather than CGI but then they found that it was actually quite difficult. It is great to hear them talk about Bruckheimer - in a rather derogatory manner - explaining how they originally wanted to remake Armageddon without changing a line just because they already thought that it was unintentionally funny. They completely berate actors - however big or small - and talk about how that is the reason why they both do all of their own voices and why they also loved blowing up puppets of their least favourite actors. It is a good, albeit short piece with a few too many shots from the final film but nevertheless a huge amount of information packed into the running time.

Next up we get a featurette entitled Building the World which takes twelve minutes to look at the hundred-odd miniature sets they built for the movie. Cited as the biggest puppet movie ever made, we look at the evolution of the sets and get information from many of the crew involved in the production. We see brief glimpse of some of the many individuals simultaneously manning the different puppets in some of the bigger scenes amidst the behind the scenes footage and are told about how the sets are designed to reflect how America regards different countries rather than how they really are. Apparently, though, the sets of Kim Jong-Il's fortress in North Korea are supposed to be fairly realistic. They explain the forced perspective techniques used to make the shots seem wider and the sets bigger and how the standard scale for the marionettes was one-third life size also noting, amusingly, how the trees were often made from marijuana plants! This is a good featurette, without too much footage from the final film and with most of the footage present used mainly to reflect the crew's comments on the production.

Crafting the Puppets is an eight minute featurette on actually creating the various puppets. The crew talk about how daunting it was to realise the concept using puppets, taking us through the evolution of the different characters - from prototypes to fine touches on the final versions. It is certainly informative and tells you all about how to create puppets, but I'm not sure it is quite as interesting as the other featurettes.

Next we have a ten minute featurette called Pulling the Strings, which looks at the many people behind the puppets. Some of these puppeteers are true masters, and we hear from the crew about how difficult some of the Parkers' requests were and compromises needed to be made and often improvisations proved funnier than some of the planned scenes. There is quite a lot of revealing behind the scenes footage here - particularly of the puppeteers suspended in the air on gantries and the like in order to manipulate the many puppets. We look at the animatronics behind the facial articulation of the puppets, finding out how they are even more complicated to operate intricately and even get an in-depth look at the puppet sex sequence. Another good featurette.

Then there's a featurette entitled Capturing the Action, running at seven minutes in length. Shot by one of the directors of photography behind The Matrix films, we get lots of interview footage by the Parkers and their crew talking about how it was shot like you would shoot a normal action movie, except using puppets. Again we get some revealing behind the scenes footage - including shots of the helicopter sequences where they just used a flat map laid on a table to provide the background - and overall it is yet another interesting and informative piece.

Miniature Pyrotechnics is a five minute look at the explosions in the movie and hear about what was harder and what was easier about doing big bangs with miniatures. We go through the various explosive sequences: France, India and the Panama Canal and look at what was done in each location. Although unnecessarily short, it is nevertheless also a good featurette.

Up Close with Kim Jong-Il is a five minute featurette all about the real leader and his puppet alter-ego. There are some comparison shots between the real man and the puppets and it is amazing to see just how accurate they are - better than all of the other puppets. There is some behind the scenes footage and interviews with most of the crew, including the Parkers at their mocking funniest, talking about the intricate aspects of bringing this particular puppet to life and the response it will gleam from the real dictator.

There is a two-minute Dressing Room Test that is basically an early version of the dressing-room scene where Spottswood first introduces himself to Gary and a four minute Puppet Test montage that showcases Spottswood once more in several pseudo-trial scenes, often with an alternative. Some of the dialogue is actually quite funny, and some of the things they make him do are pretty funny as well.

There are several Deleted and Extended Scenes, along with a bunch of Outtakes. There is the option to play each individually, or all sequentially. Gary Outside the Tavern is an extended version of the tavern scene in the main movie. I'll Never Be A Racist Again is a minute-long new scene that is quite funny. Gary Fights the Guards is an extended version of the Matrix-style showdown at the end of the movie which really should have been left in. You're Puppets is a funny twenty-second long extension to the prison sequence where the puppets argue, amusingly, over being puppets. You're Gay Now is a thirty-second long outtake of the blow-job scene, which is quite funny. Choreographing “Lease” is basically more like just a few seconds of behind the scenes footage (I'm not sure why it is included in this section). Anytown, USA Explosion is a twenty-second explosion of one of the sets, More Seriouslyer is an excellent outtake featuring a hand-puppet standing in for Ben Affleck, sitting alongside a Meryl Streep puppet. Tonight's News is a comical extended news programme from various different countries showcasing the, often hilarious, reactions. Finally, Team America Ate My Baby is a thirty-second extended version of the Michael Moore sequence. Certainly at least a couple of the scenes could have been left in - Gary Fights the Guards being top of my list.

We get Animated Storyboards for six sequences: Paris Opening, Gary's Flashback, A Member of the Team, Kim Jong Il's Underwater Lair, F.A.G. Meets Team American and Kim Jong Il's Bedroom. Each runs for several minutes in length and features some fairly rough but nonetheless accurate sketches for the different scenes, along with some basic dialogue. It is quite nice to see the striking similarities between some of the storyboards and their final versions - although a side-by-side comparison would have assisted in this. It is quite funny to see the scenes in this form though because some were varied and some were never even filmed, so they are almost like deleted scenes. The underwater lair sequence is particularly good and should have definitely been done properly for the final version.

There are two theatrical trailers. The first runs at ninety seconds and does an excellent job of capturing the sentiment of the movie without giving too many of the great bits away. The second is nearly two and a half minutes long and does give away a little bit more but works quite well as Bruckheimer trailer, even featuring standard Bruckheimer music (reminiscent of The Rock). Both play the movie as quite deadpan, which only adds to the humour of it all. There are also start-up trailers for the new Adam Sandler comedy - a remake of the Burt Reynolds film - The Longest Yard, for the fifth season of the fantastic South Park and for Fade to Black: Jay-Z live at Madison Square Gardens, along with the new Samuel L. Jackson drama, Coach Carter.

Team America is one of the funniest movies that I have ever seen and what it makes it even more special is that it provides a pretty serious and striking political commentary as well, underneath all the blockbuster-mockery. It is entertaining at every level and is worth seeing even if you are not a fan of the Parkers. At least give it a chance. And if you are a fan of South Park and its creators, you will probably have already seen or even bought this movie, but on the slim chance you haven't, I cannot stress how good a disc it is. Technically excellent, with a bucket full of extras to boot, this is not worth a rental, it's worth buying. Highly recommended.