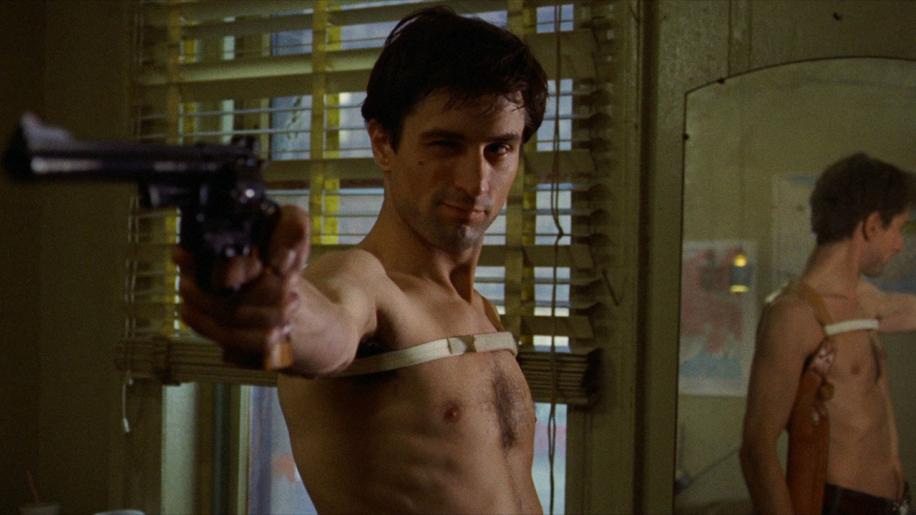 The disc has a 1.85:1 aspect anamorphically enhanced for widescreen TV’s picture with an average bitrate of 7.35 Mbps. Try to remember that this film is nearly thirty years old, was shot with a small budget and intentionally dark and grainy reflecting the grimy streets, so when you come to view the picture, even at the beginning you are greeted with what at first glance could be considered a really poor print. It is very grainy, and contains many instances of print damage, black flecks, scratches etc, especially noticeable in lighter scenes. Yet the colours are bold and striking, liberal use of red shows up beautifully, the pallet remaining strong throughout. The picture is also very detailed, sharp and precise, even in the dark times, of which there are many, there is no loss of detail. Watch the steam plumes at the beginning see how they waft and drift without any visible drop in quality; outstanding. Brightness and contrast are set very well with the black being reassuringly deep. One thing that bugs me, there is a noticeable drop in quality during the brothel shootout, now it was intentionally darkened to minimise the bloodletting and to procure a lower classification but I’ve never noticed it become washed and grainier before. At the end of the disc I felt that the picture was pretty average, even considering its origins. If the picture as a bit of a mixed bag, not so the audio, there are three tracks to choose from; English Dolby digital 5.1, English DTS 5.1 and English Dolby digital 2.0 stereo, one wonders why the original mono wasn’t included here. This is a first for me, the DTS track is the default track, so I’ll discuss that first. The first thing you notice is how rich, full bodied and bass heavy the track is, pluming hitherto depths only dreamt of on previous releases. As for separation, there really isn’t much to speak off either left to right or front to back and this is the biggest disappointment. There is much scope with the sounds of the city to fill the room, but sadly this is not the case. The only time the rears get any action is with Bernard Herrmann wonderful score which is given the full surround treatment. Otherwise it’s just front, front, front. Unfortunately, exactly the same can be said for the Dolby digital 5.1 track, though this is marginally lighter on the bass the only real difference I could detect between the two tracks. Finally the Dolby digital 2.0 stereo sound excruciatingly tinny by comparison, yet you do get a better feel for separation with the ambiance of the city, minimal though it is.

It is difficult to choose between these three tracks, the 5.1’s do add some much needed depth and bass to the film, but the 2.0, believe it or not, fairs better with the overall ambiance (excluding score) separation. Purists will baulk at the lack of the original mono and rightly so, many took exception to its missing on other ‘collectors editions’ sighting that a stereo track was sacrilege, and now there are two 5.1 tracks to further dispel them. I suppose it wouldn’t be so bad if they were exceptional, rather than the stodgy front heavy bass tracks that they are. Still if choice is your animal then choice you have here. There is no denying Taxi Driver’s impact to the cinema. Films may come and go classics are here forever, Taxi Driver has had its place assured since its first showing in 1976. As a DVD this superbit has little to entice an upgrade buyer, unless you really want the extra 5.1 tracks or miss the bass so much on the disc you already have. I cannot see this picture as any significant improvement on what is already available and of course there are no extras. As value for money the superbit is outclassed by earlier editions and two new audio tracks won’t fool many.