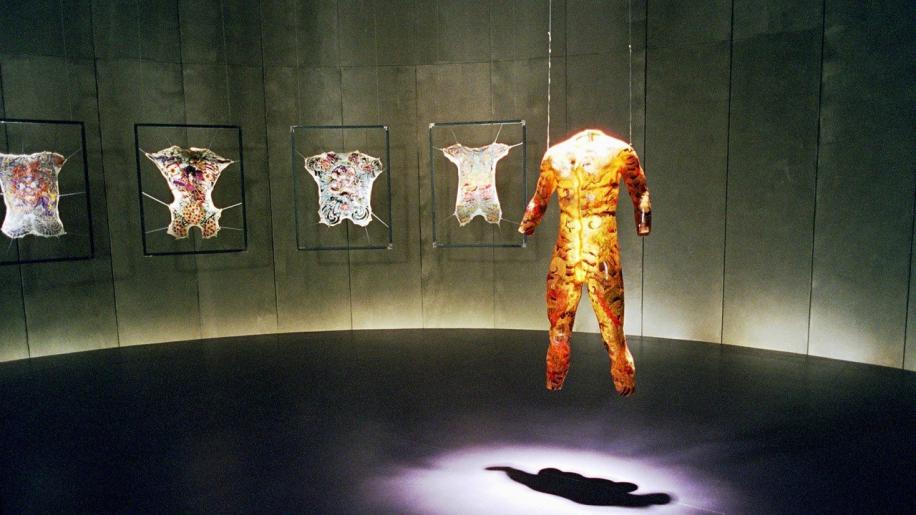 Tattoo presents many encoding problems. The movie's bleak nature, the dark underground scenes, the driving rain, all should conspire to create difficulties and therefore faults in the encoding. In fact an excellent job has been done. These challenging scenes are reproduced with commendable detail, good black levels and a notable lack of digital artefacts. Colours are almost monochromatic with the occasional burst of a vibrant primary colour - such as the red umbrella when Minks is searching for his daughter. Busy scenes such as the excavations of the bodies in the heavy rain, could have been a recipe for disaster, but again detail in those dark shadows are held at high levels, with only minor amounts of grain to spoil the show. My only complaint is that the director's decision to produce a monochromatic feel to the image has led to a flat, two dimensionality to the movie. Otherwise a fine encoding, particularly when the disc purports to be a DVD 5, although I am sure I noticed a brief layer change, and I would suspect this is actually a DVD 9 disc.

Tartan video should be commended for trying to include a DTS track on as many of their releases as they can. Tattoo comes with both DTS and DD 5.1 tracks. The Dolby track has been given a +4dB push to the dialogue track. Despite this you will still get more life out of the DTS track. If you are only able to listen to the DD track you will not be disappointed. Dialogue is rock solid, clearly audible, and has a laudable authority. The underground rave clubs produce a fair amount of ambience and a bass heavy soundtrack that is loud and somewhat boomy for my musical taste, but is certainly effective in the context of the movie. If you are fortunate to have a DTS decoder you will prefer the DTS track as it trumps the DD in every department. The details of the dialogue tracks (even though they are spoken in German) become more apparent. The opening scenes begin with the heavy, breathless gasps from the surrounds and the DTS track picks up levels of detail not apparent in the DD track. The bass in the club scenes becomes tighter and more focussed, and there is an openness that is like listening to the world outside and then throwing open a window and experiencing the enhanced nuance that this brings. DTS is the comfortable winner here.

If I had to chose between the best picture and sound quality I could get on a disc, or a host of extras I would go for quality all the time. Tartan seems to agree, as the extras provided are small in number. The trailers are fine but lets face it, how many watch them more than once? What we do get though is a UK exclusive interview with director Robert Schwentke. This thirty-minute interview with a Frank Skinner sound-a-like is an interesting, entertaining and insightful look into the mind of the writer/director. It covers topics as diverse as his movie influences, the difficulties of producing believable tattoos on fake skin, the Nazis and the effect mad cow disease had on the movie's production. An enjoyable watch.

Tattoo is a German genre film with high production values, great writing and superb acting, that will shock and disturb in a way that many horror films fail to do. It has been compared favourably to Seven and I would agree. If you're a fan of this genre you must see this film.