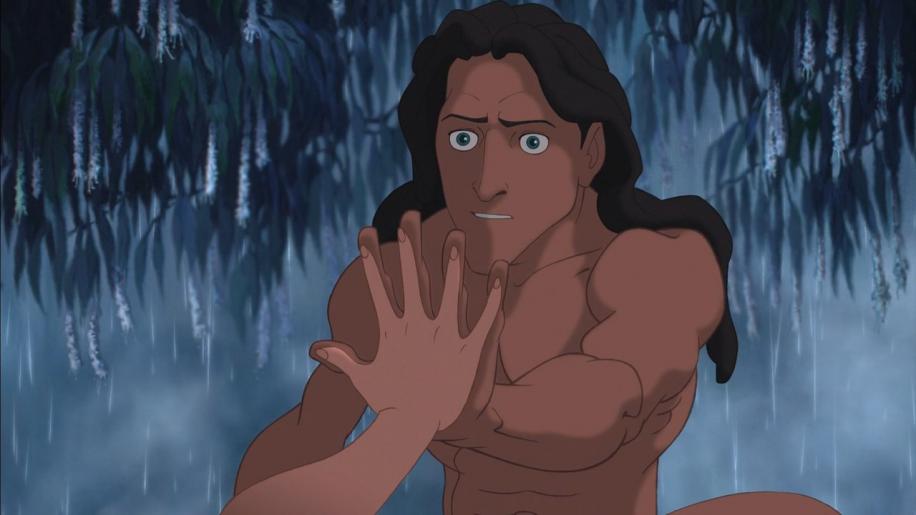 Animation done badly is possibly the worst thing to sit through on DVD. But done well and released by a quality producer, I really don't see how it can avoid gaining universally top marks. This is most certainly the case with Disney's Tarzan. Try as I might I simply couldn't find anything wrong with the image presented here, barring a couple of instances of slight shimmering on background flames early on. Presented in a glorious 1.66:1 anamorphic transfer, Tarzan looks beautiful. From the opening fiery shipwreck onward we are treated to tremendous detail throughout, every leaf, every tree, and every scampering baboon is a meticulously created visual delight and the disc displays them all with unashamed pride. As with The Incredibles fabulous island setting, the jungle here is a living, breathing entity that sucks you and overwhelms you with detail. With a wonderful use of shadow to create a dazzling sense of true scale, dappling sunlight scything through the canopy and many varied hues, the environment is never less than revelatory. Even the scenes set at night have a wonderful lustre that seems to drip atmosphere from the screen. The majestic waterfall tumbles as vividly and powerfully as the real thing and the lightning crackling through the dark blue thunder-filled sky creates a tremendous silver streak across the biggest screens.

Colours, as to be expected, are rich and possess a radiance that make taking your eyes away from the screen an absurdity. I don't think I've ever seen green look quite as entrancing as it does here. Despite this full-blooded approach, there is never any shifting, smearing or bleeding. Skin tones, even for cartoons, are important and here they are exemplary - from the swarthy sheen of Tarzan himself, to the pale rosy-cheeked freshness of Jane, everyone benefits from this wonderful transfer. The black levels, where necessary, are impenetrable, providing a weighty sense of depth.

Edge enhancement is kept to a minimum. In fact, I never really noticed it without actually specifically hunting it down. Fast action is handled superbly with no loss of clarity, no motion blurring and zero drag. Grain never shows its ugly face and there is never any evidence of pixilation or blocking. In fact, it is only the very slight shimmering that I mentioned earlier that lets the side down and even that is minimal. I checked this out on a 44 inch Sony rear pro and a 32 inch Panasonic and that shimmer was evident on both. Hopefully, it is just inherent to the check disc that I'm reviewing and will not be evident on the retail copy. The original DVD release was supplied with 5.0 Channel Dolby Digital track so this one benefits from some sub action with a full 5.1 mix. However, don't expect too much in the way of bone-jolting LFE activity because the sub still seems to wait patiently to be called into action. The soundtrack does feel a little meatier though with slightly more oomph to the initial shipwreck and leopard attack. The elephant stampede is another thunderous highlight. Speaking of thunder, the storms sound quite substantial with great rumblings steered overhead and the rainfall really does pitter-patter all around the room. The dialogue is always clear and well presented with lots of directional voices emanating from off-camera and, obviously, Phil Collins's songs are treated with lots of up-front dynamics - which could be a blessing or a curse, depending upon your viewpoint. The leopard/Tarzan interface has some great rolling effects from left to right and there is a definite sense of weight being thrown around. But whilst the front soundstage is fully utilised and sounds great, I think that the rears are somewhat short-changed in the overall design, pumping out the occasional gunshot or voice, but used primarily to add ambience - birdsong, animal chatter or rustling foliage. This is still a rousing mix but, considering the awesomely engrossing soundscape on say, Aladdin or The Lion King, it is still somewhat disappointing. Also, I found that I had to increase the volume a lot more than the original 5.0 channel version for a comfortably immersive sound field. So, sadly, the sound mix does not match the quality of the visuals. Now here is where the real differences between this and its UK predecessor are to be found. Whereas the original had only the movie, a game and a couple of read-along tracks on Disc 1 and most the extras on Disc 2, this new release pitches the Abandoned Scenes, the Phil Collins music videos for “You'll be in my heart” and “Strangers like me”, some Games and Activities for the youngsters and the R1 Commentary Track that was missing from the UK version first time around onto that disc as well. Don't get all excited about this chat track though as, amiable enough as Directors Kevin Lima, Chris Buck and Producer Bonnie Arnold are, they are still a little too fond of their animators and the whole process of bringing their version of Tarzan to the screen to be really worth more than one listen. They do give insight into the fearsome length of time it takes to produce this kind of motion picture, though. The three Abandoned Scenes are introduced by Bonnie Arnold and are presented in storyboards with sound FX and voices over the top. The third one depicting a Rambo-esque riverboat fight would've been great, in my opinion.

The Games and Activities section also includes a little DisneyPedia featurette on Living In The Jungle that appears to be a new addition.

The real meat of the matter is contained over on Disc 2. But, as with the original Collector's Edition (which this set mimics) the many featurettes, covering every aspect of the movie - its animation concepts and developments with Deep Canvas, more on the music from Phil Collins and score composer Mark Mancina, storyboarding and publicity, etc - are over and done with in a couple of minutes apiece. Sort of wham-bam fact delivery that I can't help but feel would've benefited more from being contained within a couple of more substantial documentaries. Tiny little fillers like From Burroughs to Disney tell us exactly nothing and although the Research Trip to Africa is nice it barely skates over the influence that it must have had on the film-makers when they were making notes there. Along the way there is some good stuff though - the session demos from Phil Collins and the fact that he had to learn to sing the songs in a variety of different languages for the foreign markets; great character designs from concept to final animation for all the major players with input from some of the voice cast, as well (Tarzan is the main man, obviously, and it is cool to see how they developed him via observations of snowboarding, rollerblading and even basketball); another chance to use that multi-angle button on your remote to toggle between various stages of animation. Intercontinental Film Making reveals how the movie was actually animated both in America and France simultaneously, with Parisian artists bringing in a classical element to the mix. But, the addition of three new image galleries is another plus for this release with some really gorgeous artwork on offer.

Finally, this release delivers just the one Theatrical Trailer alongside a Posters and Ad Campaign as opposed to the three trailers on the original. Not a bad selection of goodies, really. But for a film as good as this, and considering the staggering efforts that have gone into other Disney and related releases, they could have been consolidated into a couple of documentaries that really got into the subject matter and then bolstered by further featurettes. It's a shame that the creator of Tarzan doesn't get more recognition, too. Overall, Tarzan is a great movie - a thoroughly enjoyable yarn told in the old-fashioned way. It is filled to brimming with animation to knock your socks off, topped off with a score that, I feel anyway, adds immeasurably to the mood and the excitement. Tarzan is the prototype action hero and he fights for the ecology, too. Basically, this kind of entertainment never goes out of fashion, does it? A wonderful jungle adventure that will have the kids and the grownups equally enthralled.

Disc-wise, this release ups the grade from the previous Collector's Edition but if you already have that earlier UK double-disc release I'm not convinced that it is worth replacing it with this one just for the Commentary, a few new galleries and an underwhelming inclusion for the subwoofer. But, if you are a big-time fan or don't own any version already then I can recommend this release whole-heartedly. Tarzan truly is the King of the Swingers. Wonderful stuff, folks.