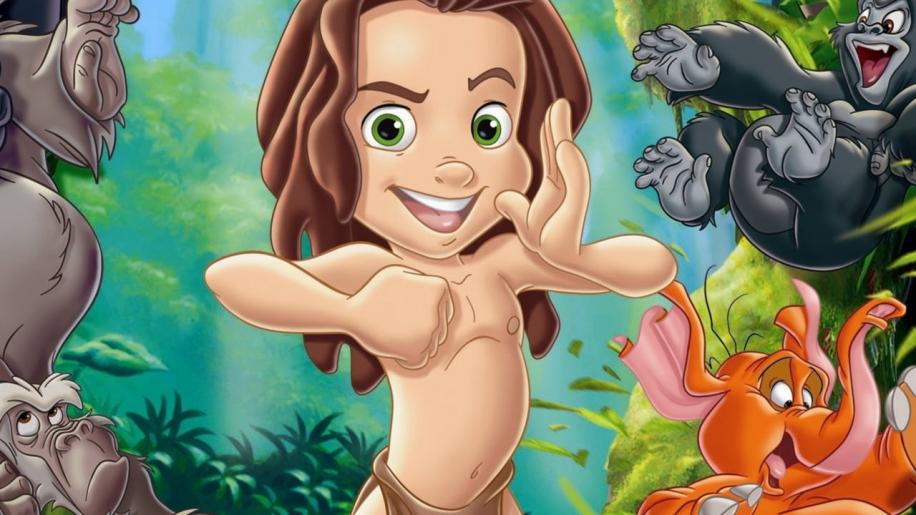 As with the first Tarzan, the animation is truly breathtaking. Mixing traditional animation with CGI to great effect gives the image an almost 3 dimensionality and the colours are sumptuously rich, deep and vivid. Some scenes show a certain 'roughness' to the animation that were absent in the original and is a sign that this sequel may not have had the time and attention to detail that was lavished on the first. This has stopped me giving the image a perfect 10, but this is a fault with the animation itself, not the DVD so purely on the quality of the DVD image, it really is close to perfection. This is borne out by the very high bit rate average on this disc of 7.60bps which is reaching the upper limits of the technology.

It must be quite difficult to go wrong with producing a stunning image when you are working within the realms of animation. No grain, deep blacks, superb detail etc. etc., but still, the quality of the drawing, the colour palettes used, the CGI work incorporated and the overall impact of the picture here is fantastic and outside of full CGI animation such as The Incredibles, this is as good as it gets. Something Tarzan 2 does have over its predecessor is the addition of a DTS 5.1 soundtrack as well as the more usual Dolby Digital 5.1 version. Now I've heard the debate many times how some say that DTS is just louder than Dolby Digital and has too much bass but I'm on the side of those who say that DTS isn't just louder, it has a far superior dynamic range and an openness that Dolby Digital just cannot achieve with its higher compression rates. Here is a perfect example of just that comparison. Play the Dolby Digital soundtrack first and it all sounds fine. Good separation, nice tonal balance and a respectful level of LFE but then switch to DTS and it is like removing pillows from the front of each of your speakers. Suddenly you can hear crickets in your rear speakers, the breath of each voice just before they speak, the LFE has more impact so you can 'feel' as well as hear the thud of a Gorilla's punch.

The sound through Dolby Digital is very good, the DTS soundtrack is superb. If DTS was the only option, I'd give the sound a 9, as there are both and some viewers may only have the option of Dolby Digital, then I think an 8 is fair. But please, if you have the choice, listen to Tarzan 2 through DTS. It would be rude not to! You cannot help thinking that a 2 disc version is just around the corner as the extras are not too plentiful. Saying that, what there is does offer plenty of entertainment for the kids. Backstage Disney is a behind-the-scenes featurette showing how this sequel came about and how they had to recruit some new actors to replace some of those from the original. Most importantly, the voice of Tarzan himself needed careful selection as the boy who supplied the voice in the first, was now too old and his voice had broken so they needed someone who sounded like he did in the original they also faced this same dilemma with the voice of Terk which was originally supplied by Rosie O'Donnell and by Brenda Grate in this movie.

Music and More as the name suggests, shows both Phil Collins in the studio recording the new songs and a very young Tiffany Evans who released a version of one of them as a single and she tells how she was specifically chosen by Phil himself to record the song. Games and Activities is where the kids will spend most of their time in the extras. Here you have a game titled Gorilla Grumble Game where you watch the two gorillas from the movie prod and poke one another and you have to repeat the correct sequence of hits to help Tantor, the baby elephant escape from a sticky situation.

Terk and Tantor's Jungle Guide mixes animation with real film of various animals accompanied by interesting facts about them supplied by the wisecracking ape Terk and his buddy the little elephant Tantor. Finally, Tarzan: Matter-of-Facts is a mode which allows you to watch the movie and have onscreen fun facts pop up now and again about the movie and the animals within it. So that's your lot. Not too many as I said, but enough to give the children some fun once the movie's over. Tarzan 2 is a strange little movie. The story is nothing to shout about and its appeal to a younger audience is a little disappointing for us older lot who still enjoy a good Disney movie. But the beautiful animation and the superb sound through DTS means that you are still more than happy to sit through it admiring its technical merit whilst your children enjoy the antics of the characters. It's not as good as the original (I never saw the 2002 release, Tarzan & Jane so cannot comment on comparisons with that one) but is still worth watching if you enjoyed the first. Still, I can't see Phil getting any awards for this one, nor anyone else for that matter!