This is a speaker that has all of the Tannoy design principles present and correct and the result is a package that plays to all of the brand’s strong points. 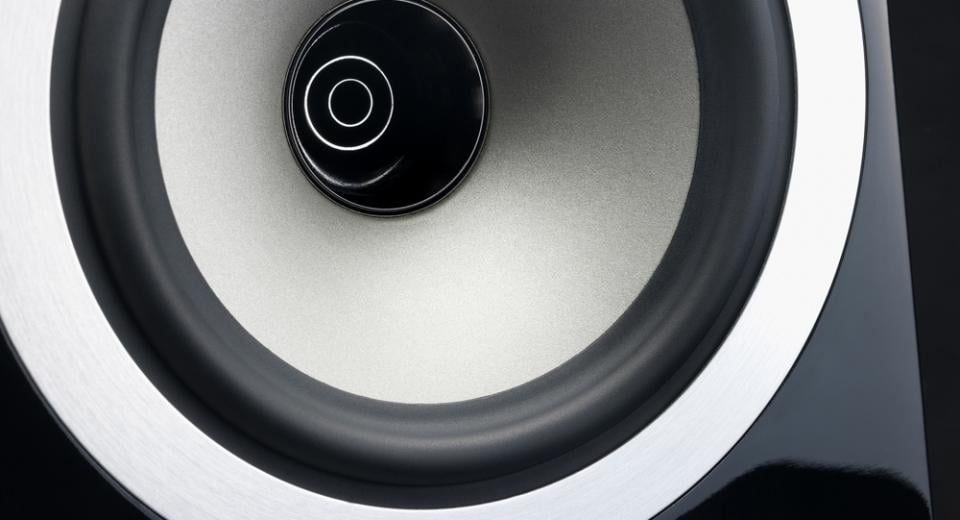 Some hifi companies have the lifespan of a mayfly on a trout stream. They can go from a press release promising the earth (or at least hifi greatness) to a minor historical footnote in no time at all. This is a tough industry and companies that make it to anniversaries that have a zero on the end are doing well. Against these fleeting lifespans, some brands have been mainstays of the industry for thirty, forty even fifty years or longer. Generally, these brands have managed to retain a degree of identity but have also moved with the times. McIntosh might still make a version of their iconic valve power amp but they also make state of the art digital products too.

While they have had to change with the times as much as any other brand out there, British institution Tannoy has worked harder than most to keep some aspects of design in common with their historical models. Smaller and less expensive Tannoy speakers are fairly conventional in terms of their appearance but if you venture further up the range, three distinctive design characteristics make themselves felt. Big Tannoy speakers combine the long standing ‘Dual Concentric’ driver with the tweeter mounted in the throat of the bass driver, comparatively large drivers of eight inches or greater and high sensitivity. In the case of the mighty Westminster, you have speakers capable of producing more than 100dB with a single watt of input power. These are design traits that date back to the founding of the company and make for highly distinctive speakers.

The Precision range you see here is an attempt to marry traditional Tannoy design cues to a more compact form. This was first seen in the Definition series released a few years ago but the Precisions trade in the eight inch (or larger) drivers of the Definitions and replace it with an all new six inch model. The result is a halfway house between the classic high sensitivity big boxes and the more domestically acceptable boxes further down the range. Does this balancing act pay off? The Precision range comprises a single standmount, a centre speaker and two floorstanders of which the 6.1 standmount, 6.2 floorstander and 6C centre turned up for review (more about the sub in due course). All of these models make use of a brand new six inch dual concentric driver developed especially for the range. This combines a 25mm titanium tweeter mounted centrally in the six inch driver. This might look like it is made of metal (and Tannoy has used it as a driver material in the past) but it is in fact a treated wood fibre which is a very traditional Tannoy driver material. In the case of the standmount, this is the only driver used but other members of the family also make use of a conventional version of the same driver.

The cabinet that these drivers were placed in is vaguely reminiscent of the larger Definition series and that is no bad thing. The cabinets have very clean lines and are almost completely free of adornment. The curved sides look excellent but also serve the purpose of breaking up standing waves and helping to make the whole cabinet less resonant. The dual concentric design helps here as well as the cabinet has one less hole in it which in turn keeps the overall rigidity. There is substantial internal bracing and Tannoy has also used what they describe as ‘Differential Materials Technology’ to couple the drivers to the cabinets. Other neat touches from the Tannoy design heritage are also present. The 6.2 Floorstanders have an integral plinth that massively aids stability. This in turn is fitted with seriously big and imposing spikes that can be adjusted for levelling purposes from the top as well as by eye with the speaker inverted. This may smack of overkill but it is another nod to the premise of this being entry level high end where these things matter. An equally flamboyant touch is the presence of Tannoy’s ‘star pattern’ terminal panel at the rear of each speakers. As well as the traditional HF/LF connections, the Precisions have a separate earth terminal (dating back to valve amps where these things were extremely important) which again in an AV install is not especially important but it looks cool.

One important note is that the 6C centre is big. Really big. In performance terms this is good news - the center has a hugely important role to fill in an AV system - but if you had any plans about sticking the 6C on the same shelf as your TV (or even in a closed shelf full stop), you will need to make very sure you have enough space for it. With the dual concentric and two more six inch drivers in it, there is unlikely to be any shortage of output though. Conversely, the 6.1 standmount and 6.2 floorstanders are big but have a sensible footprint and are unlikely to be hard to accommodate in a normal sized lounge.

The Tannoys were used with a paring of Cambridge Audio 751R and 752BD coupled with NAD DAC1 with Sky HD, a PS3 and Netflix from the TV also being used as sources. A mixture of blu ray, DVD, broadcast TV and music via FLAC, Spotify and various internet sources were also used. As with all AV speaker systems I test, the Tannoys ran constantly so for all the time they handled a flawless HD audio signal, they also had to handle the aural majesty of Cake Boss on TLC+1.

Tannoy hasn’t persevered with comparatively high sensitivity speakers out of a bloody minded sense of tradition. Although in 2013 watts are cheap, there are still advantages to the practice. By the exalted standards of the big Tannoys, the Precisions are only moderately sensitive but even so, the performance has a sense of life and energy that is lacking in some more heavily damped and less sensitive designs. The amount of power that the Tannoys need is also lower than you might expect. The 6.2 floorstanders gave me my reference 90dB test tone at a similar volume input to the much smaller and cheaper Mordaunt Short Mezzos that I normally use.

If sensitivity was the only trick the Precisions had to their name, there would be no reason to regard them as anything other than another worthy contender in the price bracket. Happily there is rather more to their talents. The dual concentric driver developed for the Precisions has a cohesiveness to it that makes the presentation of film soundtracks a fantastically engrossing experience. The excellently mastered Star Trek Into Darkness has a depth and texture to it that is truly exceptional. The 6C centre speaker might be a big lad but it has no trouble locking action to the screen and generating a measureable amount of bass energy in its own right. The use of the same driver in all the speakers combined with excellent dispersion means that the handover from speaker to speaker is imperceptible. This is a talent that is as useful during a ballistic action set piece as it is during a scene where it is the tiny details that matter. Everything you play on the Tannoys is also helped by excellent tonal realism. The Precisions manage the tricky task of keeping something real world like a human voice entirely believable in the midst of enormous sound effects. As sounds you have a point of reference for sound real this in turn helps everything else sound real too. The result is a depth and realism to the performance that is the difference between losing yourself completely to a film and sitting there analysing the speakers and ignoring the point of why you are listening to it in the first place.
The use of the same driver in all the speakers combined with excellent dispersion means that the handover from speaker to speaker is imperceptible. The T2.12 Subwoofer is the least expensive part of this system and any criticisms I make of it need to be considered in light of this. Given the significant radiating area it has, it actually sounds extremely agile and doesn’t suffer from extended bloat or overhang that can often result from the passive driver not quite keeping up with the powered one. There is plenty of low end shove and commendable detail to it as well. The only real limitation is that the Precisions are sufficiently fast and clean that even this capable sub doesn’t permit an entirely seamless handover between speakers and sub. Given that the 6.2 floorstander is £1,700 and no slouch in the bass department, it might be better to look at a sub nearer the £1,000-1,200 point to really do justice to them in terms of bass extension. Given that the TS2.12 is far from disgraced in this exalted company is a testament to it being a commendably well sorted piece of kit.

The final party piece of the Tannoys should come as no surprise given the company’s heritage but is still something that is worth pointing out. The 6.2 is a truly wonderful stereo speaker (and it transpires that the 6.1 is no slouch either). That's good news if you're looking for speakers that are going to be as happy with your music requirements as they are delivering film and TV work. The same excellent soundstage and wonderful tonality means that the Tannoy is happy with a huge range of music. Listening to a variety of bitrates and formats on the 6.2 does highlight an issue that can also make itself felt with multichannel material as well. The Tannoys are detailed, refined and revealing but will also show up some of the limitations in less well mastered material. It is rare that this winds up with whatever you choose to play being rendered unlistenable but this is probably not the package for you if you exclusively deal in low bitrate material.

Tannoy has been a strong force in AV packages for years now and their stereo pedigree is beyond question. The Precision is perhaps the most successful exercise yet in fulfilling both of these strengths. This is a speaker that has all of the Tannoy design principles present and correct and the result is a package that plays to all of the brand’s strong points. The Precisions are effortlessly capable across almost anything you might choose to use them for. At the same time, they are finished to an immaculate standard and look absolutely beautiful in a design sense that should see them as happy next to antique furniture as they would be in a state of the art lounge. When you consider the sensible dimensions, forgiving impedance and sensitivity, you have a speaker package that is one of the very finest available at the price and something I have no difficultly recommending unconditionally.