Does Q Acoustics finally have some affordable competition? 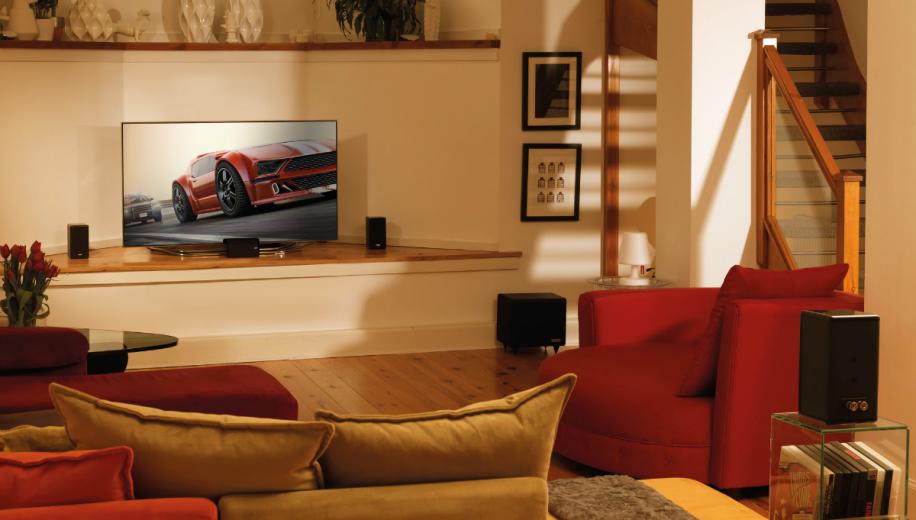 The HTS 101XP is a £600 revision of the earlier (and rather good) HTS 101. For £600 you get five matching satellites and a subwoofer. Everything turns up in the same box and Tannoy even sees fit to supply you with items like wall brackets included in the cost. If you have a look at the various product line-ups of speaker brands, this is a fairly keenly contested category but there are some good reasons to believe that the Tannoy might be something worth seeking out.

Why? Well, firstly as already noted, the preceding model was rather good so unless the Tannoy acoustics team has collectively suffered a massive blow to the head, this one is unlikely to be worse. There is also the pedigree that Tannoy has in the field of small speakers. On the face of it, this is a little curious as Tannoy also has a great reputation for making speakers that are the size of a wardrobe and built around the principles of extremely high sensitivity. Despite this, for at least the last thirty years, the company has been building excellent budget speakers and while it has had to give a little ground to the arriviste Q Acoustics, they are still a force to be reckoned with. As such, hopes are high for the HTS 101XP - can this compact system deliver on the initial promise? The Tannoy satellites are fairly conventional in themselves but they include at least one Tannoy design attribute that has been present for decades. Each satellite has a tweeter mounted coaxially with the main driver. This is not a true dual concentric in the manner of some Tannoy designs with the tweeter mounted in the throat of the mid bass driver but instead extends it out of the front still on axis. This is important for two reasons. The first is pretty prosaic - the speaker only needs to be the size of the main driver with no additional space required for the tweeter. The second is more important. With the tweeter on axis with the midrange driver, there should be less in the way of timing and phase errors and the 'sweet spot' of each speaker - where information reaches the listening position in a time aligned manner - should in turn be a little larger than a conventional speaker.

The drivers themselves are revised and enlarged versions of those used in preceding models. The midrange is handled by a four inch eliptical midbass driver. This is made from pulped paper in the traditional Tannoy fashion although possibly as a consequence of the shape. it has a heavier surround that feels more damped than it does on some more conventional Tannoy drivers. This is partnered with a 20mm titanium tweeter that gives the Tannoy a claimed response up to 40kHz which is largely pointless but does at least suggest that it should handle audible frequencies without sounding forced or strained.
The cabinet of the satellites is relatively conventional. For starters it is a box shape with 90 degree corners and rather than metal (and despite the outer edges being finished in metal), it is in fact MDF. This might not sound terribly exciting but MDF does sterling work as a material in rather more expensive speakers than this. Tannoy has supplied five identical speakers for the pack, so the centre speaker can be selected simply by placing one of the sats on its side, rotating the badge like an old PS2 and re-siting the shallow conical feet onto the long edge rather than the short one. Although if you can place all three front speakers upright as this will ensure they all sound identical and since all five speakers are the same there should be no issues with one speaker handing over to another in the system. Partnering the satellites is the most significant revision to the package. The TS2.8 is newly designed for the task and takes a number of design cues from larger Tannoy models. The relatively compact chassis mounts an 8 inch driver that is powered by an 'eXtra Power' 200W amplifier. Instead of a bass port, in keeping with larger Tannoy subs, the TS2.8 uses a passive radiator to control stray energy from the main driver and essentially obtain some 'free' extra extension. The result is a compact and fairly elegant little sub that is available on its own for £300 should you feel so inclined.

The TS2.8 is not the most lavishly equipped device going - there's no EQ in any form, no remote control or anything in the way of signal processing but the basics are all present and correct. The Tannoy is fitted with a dedicated LFE connection as well as left and right inputs and is fitted with rotary controls for crossover and volume as well as fixed two position controls for phase and standby/auto on. It isn't terribly sophisticated but it is usefully comprehensive. It is also quite impressively compact. The TS2.8 is a dinky little thing, in part because the drivers counterfire and the amp appears to be some variant of a switching design meaning it doesn't require much in the way of space.

All members of the package are finished in black with the significant change for this model being the use of a brushed metal effect on the sides that partners with piano finish end caps. The result is smart and fairly unobtrusive at the same time. If you want the Tannoys to be noticeable, they will look smart while they do so but equally, they can be squirreled away without too many issues. As the satellites are sealed, there should be no problems using them very close to a wall (and their wall bracket mounts them in just such a way). The sub will require a little more thought as it is producing energy at both ends but it should still not be the most challenging device to get running in a room.

The overall finish of the package is extremely good for the fairly sane asking price. The speakers feel sturdy and Tannoy has fitted them with speaker terminals that will work with varying thicknesses of speaker cable as well as 4mm plugs. The removable grilles are a little on the pointless side as what lurks behind them isn't really the sort of driver that is crying out to be on show but you do at least have the option if you want. The result is smart and fairly unobtrusive at the same time

The Tannoy was connected to a Yamaha RX-A3040 AV receiver with Sky HD, a Cambridge Audio 752BD Blu Ray player and a Panasonic GT60 Plasma TV acting as sources. All of this equipment was connected to an IsoTek Evo 3 Aquarius for the duration of testing. Material used included Blu-ray, broadcast and on demand TV services and two channel audio as streamed lossless and high res FLAC and compressed on demand material from Spotify.

The review set of speakers arrived having clearly done some running-in prior to arriving with me so the behaviour of a completely new set is unknown. Setup however was totally painless. Extraction from the packaging is simplicity itself and the behaviour of the speakers presented no issues at all with the Yamaha's EQ setup. A 110Hz crossover was selected with all satellites. The Tannoy house sound is a slightly difficult one to pin down, including as it does speakers like this and gigantic leviathans from outside time like the Other news is rather better though. Voices and effects played via the satellites have convincing scale and tonality to them and there is enough energy available from each speaker for there to be a sense of impact to gunshots and the like before the subwoofer is called into action. The Tannoy is an elegant lesson that small speakers don't need to sound small if a modicum of care has been applied to their design. The 110Hz crossover is effective at avoiding an unpleasant hole in the frequency response but in some rooms, they could probably handle a 100Hz one or possibly a little lower still.

The 110Hz crossover does show the TS2.8 to be a bit of a star though. This is the first Tannoy sub I've tested since the larger (and similarly designed) TS2.12 and the comparisons are interesting. The smaller sub is possessed of the same smooth, deep and full bass of its big brother (with the obvious caveats that it won't go as deep) but whereas the 2.12 can sound a bit wayward when things get really lively - think Pacific Rim- the smaller sub manages to keep a greater sense of control and agility. Whether this is purely down to smaller drivers or whether Tannoy has tweaked the behaviour of the TS2.8, it feels faster, cleaner and more assured than its big brother even if it can't match the truly prodigious low end of the 2.12.

Nothing really changes when you switch to broadcast and on demand material which is a positive reflection of how well sorted the Tannoy is. While not in the same league as the truly astonishingly sensitive flagships, the HTS 101 XP doesn't need enormous amounts of power to deliver a good, room filling performance and this means that it should be happy enough on the end of similarly priced AV receivers and furthermore, it also manages to deliver a lot of its potential at lower volume levels that you might use late at night and early in the morning. Dialogue is clear and easy to follow and the Tannoy passed the now traditional 'Elementary mumbling test' with flying colours. While re-watching The Losers, not so much as a piece of test material but to celebrate the return of the disc from my sister-in-law after a mere three years - the Tannoys gave a little pointer about their proficiency with music. The film uses a semi instrumental version of U R A Fever by The Kills for scenes of a sexual nature and the Tannoy really gets stuck into the crunching guitar riff and punchy drumming. Replay the same track (with more vocals) as FLAC and there is the same sense of energy and sheer enjoyment that there was in the film. Using the Tannoy in a 2.1 configuration won't worry a good £400 pair of stereo speakers but it is going to be pleasurable.

Once again, the unsung hero of the sextet is the sub. That same lack of overhang and congestion that the sub demonstrates with film is used to good effect here too and the crossover between satellites and sub is effective and cohesive. This is a more than reasonable way of covering all your bases and as an added bonus, the generally forgiving nature of the satellites is perfectly happy with compressed material such as Spotify. Once again, the unsung hero of the sextet is the sub

It has become a bit of a lazy thing to say but over the last few years, it seems like the answer to any 'what speaker package do I need?' question can be answered with 'Q Acoustics.' What you see here is a manufacturer using their pedigree, experience and technical knowhow to respond very effectively to upstarts. The HTS 101 XP is not very snappily named and it certainly isn't the most visually striking piece of equipment that Tannoy makes. What it is though is seriously accomplished and excellent value. If you are on a relatively tight budget for speakers - and online results suggest that the Tannoy is available for less than the already reasonable list price - this is absolutely where you should start looking for audio bliss. The Tannoy is a stonking way to spend £600 and comes recommended as a result.