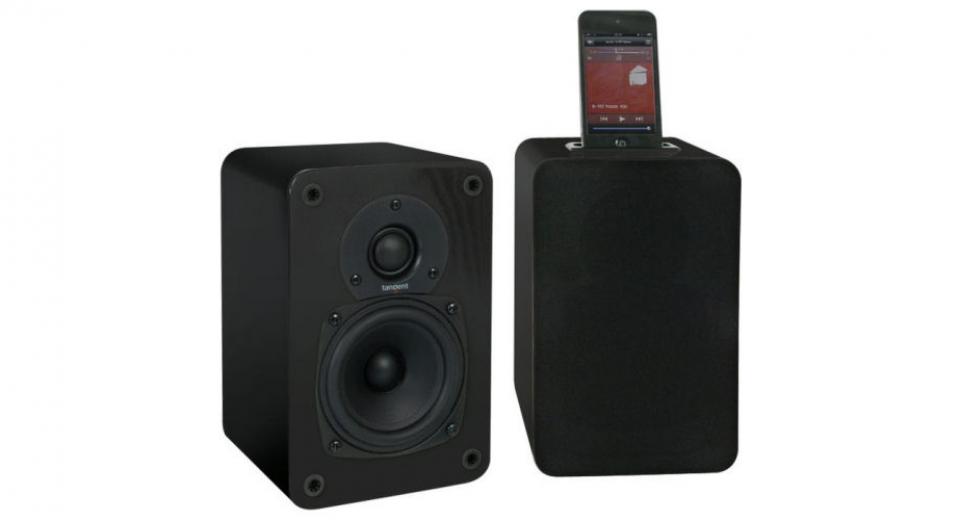 Tangent is a Danish audio manufacturer. Their extensive range of products includes desktop audio, conventional hi-fi and loudspeakers. These are mostly passive models but some of the bookshelf designs are also available in active form. From here it was presumably only a small jump to popping an iPod dock onto the top of the speaker and create a slightly unconventional self contained system. To be completely clear, Tangent also makes conventional iPod docking systems but the Evo 4i is new and takes a different path to being an all-in-one system so is the model that appears here.

Unboxing the Evo 4i reveals a pair of small bookshelf speakers. Available in black or white finishes, the Tangents are attractive enough in an inoffensive sort of way. They have slightly curved edges to reduce the boxiness and they are supplied with removable grilles. The effect is of a normal pair of speakers rather than an all-in-one system but there are some clear advantages to this approach as well. The first is that the individual speakers of the Evo 4i are smaller than any of the other products in the test. The second is that this is a genuine stereo product, more of which later.

Only one of the two speakers is actually active. It contains a stereo amplifier that powers the second entirely passive speaker. The two are connected by a single run of (supplied) speaker cable. This means that like the other five models in the test, you only need a single plug. As well as the internal amplifier, the active speaker contains the dock mounting, auxiliary input and remote sensor. In a perfect world, the auxiliary input would be a pair of RCA phono inputs instead of a single 3.5mm socket but it does mean other items can be connected, including a preamp that would allow the Tangents to become part of a full system. A large LED is red in standby and green when the unit is powered up. The Tangent has absolutely no controls on the unit at all. As such losing the remote is not a good idea.

Each speaker mounts a 4 inch mid bass driver and a 1 inch tweeter. In terms of conventional loudspeakers, the main driver is not that large but in comparison to an iPod system it is a pretty hefty. Working in combination with an equally substantial tweeter and rear mounted bass port, the Tangent promises to master ends of the frequency spectrum that other docks can only dream of. Tangent quote an amplifier output of 25 watts but this is at a fairly hefty 10% THD so the useable figure is going to be lower than that.

The Tangent feels impressively solid and well assembled. The paint finish is of a good standard and everything feels well thought out. A slight criticism is that for a product that is very dependent on the remote, the handset itself is small, easy to pick up the wrong way around and feels somewhat flimsy. The good news is that it works well and the unit is very responsive.

The performance of the Tangent is in many ways different to the other docks here. The most defining area where the Evo 4i is quite unlike anything else here is in terms of stereo performance. Other units here can convey a reasonable sense of stereo from a single point but the Tangent has effortless separation without even trying because more than any other product here it is a stereo design. The supplied run of speaker cable is long enough to place the speakers two metres apart (and it is hardly a challenge to substitute a longer run if needed). The result is a soundstage that nothing else here can touch.

The positive attributes don’t end there either. The Tangent has commendable bass extension but thanks to making use of two small bass ports rather than a single large one there is little in the way of resonance or “honking” at any points in the frequency response. The result is a cleaner sound than the similarly extended Sonoro. Placing the Tangent’s on stands improves this even further.

Further up the frequency response, the gap between the Evo4i and the other docks is rather less pronounced. The separate tweeters give a pleasing lift to the top end but the Sonoro and the Monitor Audio in particular can match and on occasions surpass it. The midrange is clean and detailed though. It is easy to follow complex material and there is useful sense of separation. The tonality is good too. Voices sound like voices and instruments are also generally believable. As might be expected by that high stated distortion figure, when pushed, the Tangent will harden up and sound a little less pleasant but the levels this happens at are higher than most other units in the test.

In the very subjective area of timing, the Tangent sounds lively and cohesive. It cannot quite match the sheer life and energy that the Monitor Audio can with lively pieces but it is still very entertaining for the most part. When you select music that is less lively, the Tangent has a smoothness and control that makes it extremely easy to listen to for long periods of time.

The Tangent is a completely different way of going about the design of an iPod system. It is essentially a bridge between a lifestyle iPod system and more conventional full size hi-fi. Whether this balance is what you need is going to be entirely up to you but I found the ability to create a meaningful soundstage something of a pleasure after listening to the one box designs. The looks are a bit utilitarian and you definitely don’t want to lose the remote but the Tangent is a very interesting solution to getting good performance from an iPod.