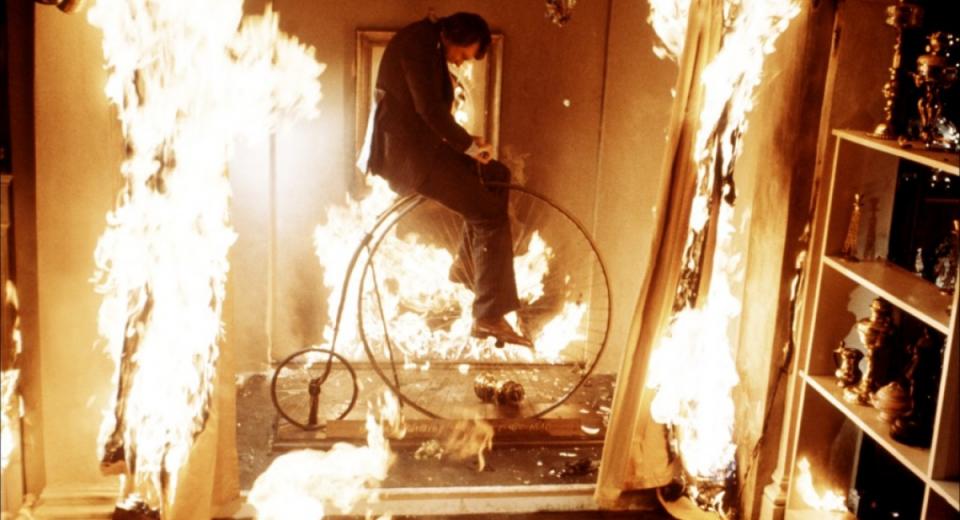 Olive Films stick to their guns with another unmolested, un-tinkered-with transfer. Encoded via AVC, Tales That Witness Madness is presented 1.78:1 and it looks very fine indeed.

The print is in pretty decent shape. Just the odd little flash and pop here and there, and only tiny, blink-and-you’ll-miss-it vertical line that wobbles in for a split second. The image is strong and stable with no frame judders that I noticed. Contrast is fine, with nothing blown-out, a decent slide-off to grey, and we have some reasonably deep blacks to provide some interesting shadows and some depth to the image. I wouldn’t say that colours leap from the screen, but they can still be quite vivid and bright when called for. There is blood on show despite this being quite tame in many respects, and it is thick and deep and splashily redolent. We get to see some raw meat that almost literally fills the frame, and it looks hugely fresh and gaudy. In fact, the cooked equivalent we see afterwards looks so tasty that it actually made my mouth water.

I’m happy with the level of detail seen in this image. Facial texture is very good, with some impressively revealing close-ups for both the boys and the girls, the trees and the tigers. There is good finite definition and hair separation going on that I sincerely doubt has been seen on any other version except that which played out theatrically four decades ago. Some shots, especially those set in Peter McEneany’s – I mean Peter McEnerny’s – antique shop have a softer and hazier appearance, and become much flatter and less resolved. I would say that this is down to the source and not a fault of the transfer. Background is none too shabby either.

As is common practice for Olive Films, the transfer has a nice, raw texture to it. Grain is intact and the image has not been mucked-about with to make it look prettier. There is no edge enhancement, no banding, no aliasing, and colours have not been artificially boosted.

This is good, solid stuff from a label that has been consistently respectful towards their titles. We just get the one audio option, and it is a faithful and great sounding DTS-HD MA 1.0 track that handles the limited sound design of Freddie Francis’ portmanteau with enough clarity and detail to satisfy.

Obviously we are not going to get smacked around the head with aggressive dynamics here, and there is nothing spectacular to remark about with regards to action, scoring or effects. But this is a clean, clear and well-mixed track that doesn’t muddy-up the dialogue or swamp it behind the music. It caters for a few little details that you definitely wouldn’t have noticed on any other version – such as the sound of vehicles moving past outside the scene locations, or distant church bells that just happen to be caught within the recording.

The score from Bernard Ebbinghouse is an eclectic affair, with plenty of era-laced dramatics, but also a few nicely uneasy touches, such as the sound of a finger rubbed around the rim of glass of water, or the tribal elements that suffuse the voodoo-esque final tale. There is naturally the ubiquitous thunderstorm, but it understandably lacks power within this mix. What I did find eerily enjoyable was the detail heard in the arboreal cat-fight between Joan Collins and the tree-bitch. There are lots of snapping twigs and scratchy effects to help energise the nightmarish sequence, making it feel quite primal and organic.

Once again, this is clean and crisp and hasn’t been messed-around with. Hats off. There no extras, I'm afraid. I have witnessed madness … and seen it off with its “tale” between its legs.

Although it is always good to see another older horror film surfacing in hi-def, Tales That Witness Madness can be a tawdry and unsatisfying affair. The spooky anthology trend had already peaked by this time, with Milton Subotsky and his admirable armada for Amicus having bled it dry with fateful revelations, shocking twists and plenty of EC gruesomeness. What was left behind was mopped-up by Jennifer Jay for this insipid, sporadically entertaining, but really rather silly offering. Some moments are certainly fun, with the tree-bitch tale being the most unusual and fantastically zany – and a clear influence upon Sam Raimi – and there is no denying that it is a treat to see a well-known cast getting hurled into a series of preposterous scenarios. But this is director Freddie Francis at his least inspired, visually arresting or ambitious, and that can’t help but disappoint.

On the plus side, Olive Films once again release a barebones disc that can happily boast of having had no digital tomfoolery done to it to foul-up what is a very decent 1080p makeover for a film that only a select few will have any interest in. The picture is solid and reliable and offers some great detail. The audio is faithful to its limited source, but comes across with clarity and vigour.

There are far better genre portmanteaus out there, but there will definitely be those with a special fondness for this one. Its arrival on Blu-ray should be applauded, and I’m sure that its fans will be more than happy with the transfer it has received.