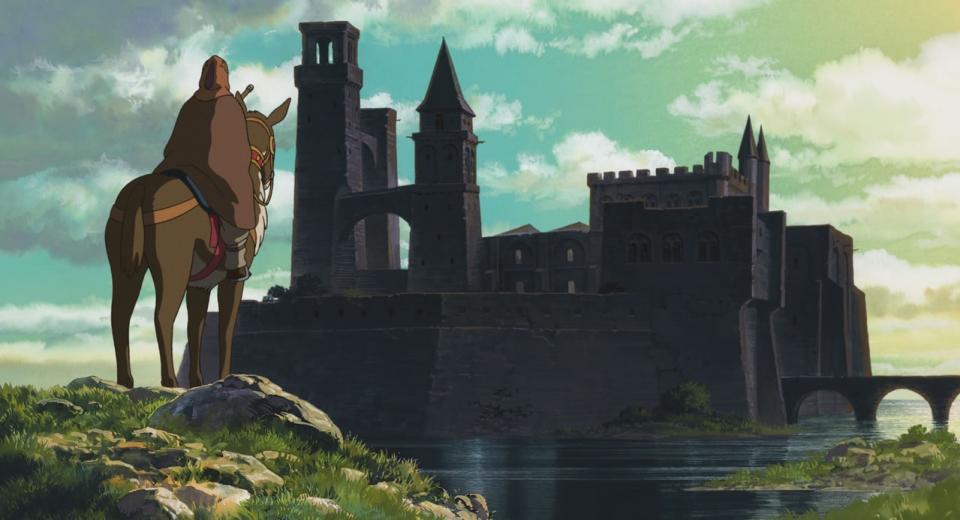 The image reproduction at 1080p 16:9 is superb, and with the cinematography being such a focal point in this movie, I was expecting the cell animation to make things slightly more difficult to stay convincing. I could not have been more wrong. If anything, the art direction helped to unshackle the creative boundaries you might find in a live action movie, or CG animated movie. Wide and lingering vistas are filled with beautiful watercolour skies that are jaw dropping. Landscapes are rugged, soft, and meandering. Outlines are strong without making the 2D cell work stand off the screen unnaturally; there is a depth to the visual style that is unexpectedly effortless. The animation can, as with all cell animation, be a little on the jerky side. Totally forgivable though. Colours are vibrant, and the grading is a mixture of a muted blueish hue, which lends a dark sense of foreboding to the image, and vibrant yellows and reds. Contrast is not pushed particularly hard at all, which does sometimes make the darker images seem slightly faded or washed out, but since there's generally so much colour, it almost feels deliberate in that it gives the eye a bit of a rest from the huge colour palette employed throughout the movie. One scene in particular at the beginning of the movie where two dragons are fighting in the sky is a particularly breathtaking spectacle. I had to go back and watch that bit again. Once again, Studio Ghibli manage to create a varied and textured soundscape by using deep atmospherics, combined with subtle foley and original sound design. The DTS-HD MA English 5.1 track provides excellent audio reproduction. Dialogue slips behind some of the more frantic sonic moments, such as the opening scene where the Dragons fight above a ship at sea, but you'll only notice that if you look for it. The sound design for this particular scene offers a perfectly wonderful distraction to this anyway (again, re-watched this scene several times). High frequencies are mixed well, and cut through effortlessly. LFE is marginally over the top at times, but frequency bleeding isn't a major issue. Tamiya Terashima's soundtrack is exceptional. It's clear to hear his hollywood influences, but they are coupled with a nice balance between celtic and middle eastern themes. If taken out of context of a particular scene or section, it might seem an odd choice of direction, but the rich and flowing music he has produced for Earthsea marries perfectly with the tone and spectacle of the movie. Some may argue that the extras on this disc perhaps deserve a better score than the movie itself! Loaded with a huge array of fantastic content, you most certainly will not be left feeling hard done by in the extras department with this Blu-ray.

The Birth of the Film Soundtrack Featurette – A Brand new hour long in-depth look at the music production from start to finish for the entire project, seen for the first time with this release.

NTV Special Featurette - A 40 minute long making of special that takes a look at the entire movie making process involved with Tales from Earthsea with interviews and behind the scenes footage. Subtitled in English

Behind the Microphone - A 50 minute documentary about the Japanese voice acting. Informative, if a little dull after a while.

Behind the Studio: Origins of Earthsea - a 5 minute promo that discusses how Tales from Earthsea came to fruition over the course of 20 years. Tales from Earthsea is a wonderfully epic tale of wizards and magic that, if judged on it's own merits, stands up well as a fantasy animated movie. Unfortunately, there is a danger that it assumes you already know something about the universe in which it is set, and as such, fails to fully explain a lot of the concepts that it relies upon for it's narrative. Coming to this movie cold, having never read the books, may mean your experience is slightly more confused than that of someone who has read the books; however, audiences familiar with the books, may feel a little affronted by how Goro Miyazaki's has clearly dipped in to the source material to retrieve little nuggets of substances, and then re shaped them himself to be his own. As a movie experience, it feels a little caught between a rock and a hard place, but forgiving these issues, it's a solid epic fantasy that while not pushing too many boundaries, manages to hold your attention from start to finish, and leave you feeling satisfied.

This Blu-ray on the whole is solid. With great visuals, amazing animation, stunningly beautiful artwork, and an enchanting soundtrack, I urge you to grab a copy of this little gem. It may not be the best example of what Blu-ray can do, but it's certainly one that you'll go back to in your collection, time and time again.