More an epitaph than a sequel 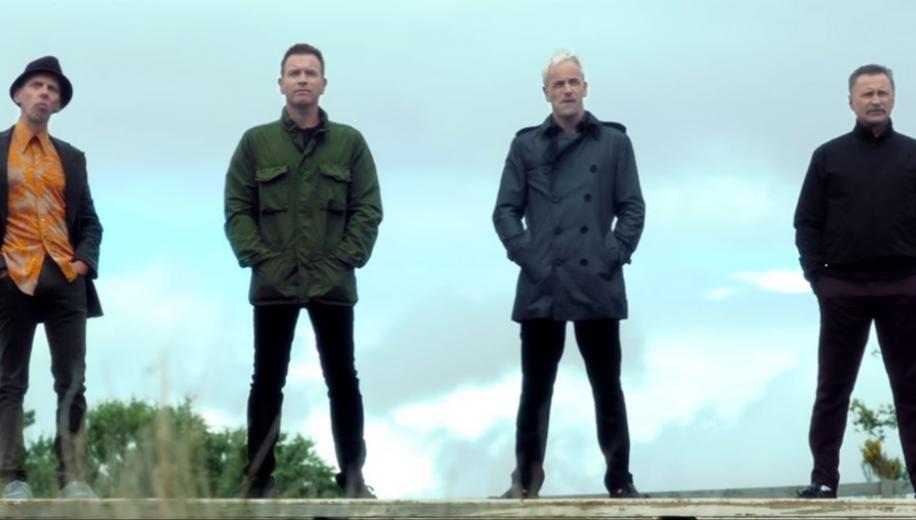 How do you make a sequel to a beloved cult film? You don’t. Well, that’s pretty much what Danny Boyle has achieved with T2 Trainspotting 2, his follow-up to a film so steeped in imagery, drug use and human horror and misery that it was always destined for stardom. T2 is only very loosely based upon author Irvine Welsh’s Porno (the novel sequel) and indeed contains bits from the original, so essentially the film catches up with the ‘heroes’ of twenty years ago, sees where they are, what they have been up to, and how they so easily fall back into old habits. Starring, and reuniting, the original cast of Robert Carlyle, Jonny Lee Miller, Ewan McGregor and Ewen Bremner, Boyle and screenwriter John Hodge effortlessly draw them back into Edinburgh in a story that revolves around Renton, who returns from Amsterdam where he has been hiding out since he stole the money from his mates in Trainspotting.
He connects with Spud first (who is a recovering junkie, but very down on his luck) then with Sick-boy (now named Simon) who has his own scams going and the two, after initial confrontation, soon fall in together. Meanwhile Begbie escapes from gaol, tries to induct his son into his way of life before discovering Renton is back, and goes on the hunt to seek revenge. The skill of the film is in the details; you believe it is the same characters, but older (with the possible exception of Begbie initially) and using flashbacks (to the first film and beyond!) creates a sympathetic portrait for each of these reprobates. Boyle fills his frame with memories and style; seasoned a little so that T2 is nowhere near as fierce, as such it will likely be less well remembered. Think of it more as an epilogue rather than a fully-fledged sequel, a catch-up and discussion, if you will, and as such is a fitting epitaph. Detail is nice and sharp, throughout – barring the differing source stock used for some of the flashback scenes – with staples like skin texture and clothing weaves being very discernible; checkout the baize on the pool table. But also look to the scrap yard surrounding the pub, or graffiti, or cityscape shots – all are clear and sharp. Of particular delight are the rock formations and overlooks of Edinburgh when Renton and Spud are on their run – see how picture postcard they look. Close comparison to the (included) 1080p Blu-ray show only modest improvements, but this is to be expected given the source; improvements are there, just not massive.


It is the HDR and WCG where the real differences lie; look back at the running scene which is set during a bright sunny day – the UHD is glorious: the grass is lush and vibrant, the sky is a deep, deep blue, the sun a burning orb glinting off the city windows, while the boys are silhouetted against it. The Blu-ray is positively insipid and dull when compared. Other scenes benefit greatly too, Boyle’s use of colour really pays dividends, check out the night club lights, or the greens when Renton first meets up with Simon. The black level has greatly improved depth with more hiding in the shadows, this gives further punch to the image, while the whites are just as good, with only some very slight clipping seen in clouds in the brightest of sunshine. Digitally there are no compression issues, though some of the darker scenes occasionally suffer with a little noise (lower resolution cameras used, I’ll wager), while some of the footage treated to look like stock, or indeed the stock footage, by its very nature suffers accordingly. In all though a very pleasing image. The object-based nature of the Dolby Atmos soundtrack is somewhat wasted in a film that concentrates more on dialogue and music than it does with effects and surround environment. That’s not to say it is a poor track but, rather than an effects extravaganza, we are treated to a pounding score that comes at you from all directions. Oh, and this track is LOUD! Dialogue is clear and precise, dominated by the frontal array, sounds very natural and gets a little bit of directionality. Effects are nicely rendered but limited due to the nature of the film, so the bar fight sounds great, weather and vehicles as well, even the nightclub scenes are effective. But it's the score that is served best, using all channels, including those above, you are cocooned within a surround field where musical beats hit you from all sides and vocals from the top (for example). Bass is deep and strong and gives tremendous weight to the score; with many of the songs chosen having a heavy bass line this can literally shake the room. Disc 2 – Full HD Blu-ray
Audio Commentary – With director Danny Boyle and screenwriter John Hodge has plenty of information on pretty much all aspects of the production from inception, writing, reuniting cast, scheduling issues, locations, how the landscape has changed, themes and more.
20 Years in the Making: Conversation with Danny Boyle and The Cast featurette – This twenty five minute conversation sees the director chatting with Robert Carlyle, Jonny Miller and Ewan McGregor (Ewen Bremner appeared as a cardboard cut-out) in a frank and insightful chat about what is was like returning to the same characters after 20 years. It is an entertaining listen and all have something to say – not sure why McGregor felt in necessary to have a hat and scarf on though.
Deleted Scenes – 29 in total with a runtime in excess of 30 minutes; with a combination of scene extensions and new material there is something for everyone!
Carlton Athletic Documentary: Swapping Addiction for Endorphins – Is a five minute piece on the ‘Junkies Football Club’, ex-junkies who seek to better themselves and those around them by sharing stories and playing sport; actually manages to be quite moving in such a short time. T2 Trainspotting 2 is Danny Boyle’s ode to one of his greatest works, closing a chapter on Renton, Sick-boy, Spud and Begbie by returning twenty years later to see where these reprehensible characters have ended up. Written and directed more as a love letter to his previous film it plays out as an epitaph rather than a sequel, filled with memory and style. The plot comes second to the characters that initially seem to have gained little experience in the intervening years, but all have their moment of realisation and perhaps that is all we can ask for. Verve and wit permeate the screenplay and gone are the shock and awe images of the original as not only have the characters, but the director, the town and the audience moved on.


Verve and wit permeate the screenplay

The 4K Ultra HD Blu-ray set from Sony is pretty good and up to their usual standards; the image from a 2K DI is clean and bright. Whilst the detail is only a modest upgrade from the 1080 image, the benefits of HDR and the WCG really pay dividends with a tremendous range that leaves the Blu-ray looking dull and grey! The Dolby Atmos track eschews traditional effects for a more score based surround experience – but it does come at you from all sides and above, with a thumping bass track (be warned the track is very loud). Extras are found on the Blu-ray and whilst limited are actually quite substantial in content.