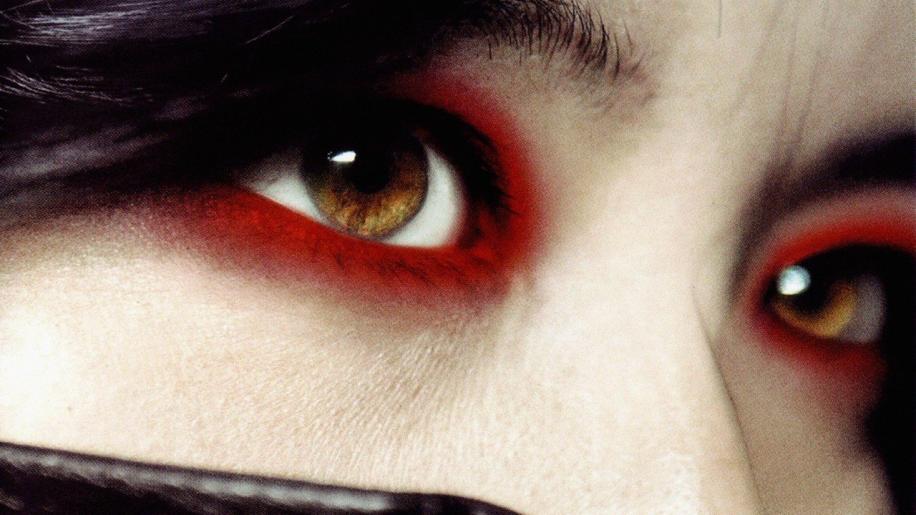 With an anamorphic 2.35:1 image, Sympathy For Lady Vengeance offers a fairly reasonable presentation of the film. Park's majestic compositions have been effectively retained within a strong and reliable image, the depth of his framing accurate and consistent. Colours are realistic without being too flamboyant - blood is nice and deep, snow is a crisp white and the bright exteriors have a naturalistic sheen. They don't leap at you though, and can often lack warmth. But there's no problem that I could see with smearing or over-saturation. Skin tones are fairly natural too and clarity in close-ups reveals plenty of detail in faces - be they the harried visages of the traumatised parents or the dark crags of Mr. Baek. Geum-Ja, however, has skin like porcelain, with only the red-tinged eye-shadow highlighting her face.

The film suffers from a high level of grain that is, sadly, prevalent throughout. This has the unfortunate effect of lessening the definition of edges and people in the middle to the background areas. This will be more apparent on larger screens, I fear. Otherwise, detail is actually quite good. Check out the detail on the working parts of Geum-Ja's new gun.

Black levels, whilst okay, are not as deep as they could be - especially during a confrontation in the alleyway which reduces the atmospherics of the scene slightly. Also, the contrast balance which works very well at some points - the early mountaintop fantasy sequences and the later scene when Geum-Ja rips open a curtain to spill blinding, intimidating sunlight upon her captive - does not manage the same feat at others - her meeting with her daughter in the Australian outback and one or two of the exterior shots of the old deserted school. The snowflakes are quite nicely picked out, though.

The transfer does carry some edge enhancement but it is nowhere near as bad as some Asian discs that I've seen, and I saw some evidence of compression errors, blocking and motion drag. Overall, the picture was decent, but its positive elements could certainly be overtaken by the negatives the larger the screen it is viewed on.

This Hong Kong release sees Sympathy For Lady Vengeance equipped with both Dolby Digital 5.1 and 2.0 mixes and, best of all, a rousing DTS-ES track, too. But, although the DD 2.0 offers a robust and subtly dynamic range, the track of choice would have to be the DTS-ES. What about the DD 5.1 track, I hear you ask? Well, forget it folks. Lasting for just an hour before vanishing from the disc altogether, the DD 5.1 appears to have suffered a major, in fact, calamitous encoding error. Not just restricted to my review copy either, it seems that a large proportion of the first Hong Kong pressing of the disc has the same problem, which is an unforgivable mistake, in my opinion. Even today, not everybody has DTS capability and to deny them the chance of a decent surround mix for this popular A-list title (and, from what I heard of the track, it was none too shabby until the point at which it cut off) is a terrible blunder.

However, this woeful glitch aside, let's press on with what does work. The ES track established a smart and distinct musical presence immediately with the classical score swirling around the set-up with clinical precision. The track is immensely sharp and loud and possesses pristine and realistic steerage right around the room. The rears are often engaged with thumping footsteps and muffled, dislocated voices around the noisy apartment block in which Geum-Ja is staying. In fact, this effect was done so well that it spooked my German Shepherd into searching the house for intruders, and many times I found myself looking over my shoulder in a reflex action to the directional ambience attained. The thunder during the fantasy sequence in Chapter 2 crawls across the ceiling with a natural and ominously deep realism. The occasions when Geum-Ja's awesome handgun goes off sound alarmingly sudden and room-engulfing with nice directionality across the front soundstage.

But, as is so often the case with Asian DVDs, this delicious sound design is often held in check with many lengthy scenes of dialogue in-between the bombastics. This is somewhat infuriating considering what the DTS-ES mix is capable of delivering, but then again, it would wrong for me to mark down a film just because it doesn't make the use of its sound that I, myself, would have preferred. The fact is that when called upon to deliver the goods, it most certainly does so with aggression and conviction. It's just that it is not called upon to do so very often.

So, an extremely good DTS-ES track that is sadly underused. Which is obviously a lot better than a DD 5.1 mix that vanishes after an hour. The DD 2.0, with some tweakage of your set-up, can sound quite enveloping, too. But it's certainly so substitute.

Unfortunately, there isn't much going on in this department. This is the Hong Kong release of Lady Vengeance as opposed to the more comprehensive Korean 2-disc edition which has two versions of the film - colour and a fade-to-monochrome options - and a plethora of extra goodies. As such we only get a very sparse Making Of that lasts just over ten minutes but is merely some cameras set up behind the scenes to capture the filming as it takes place. Several scenes are covered with the only things of note being Yeong-ae Lee rehearsing her lines just prior to stepping in front of the cameras, and Chan-wook Park offering her advice between takes. The featurette is subtitled in English, which may be the only bonus that this release has over the Korean edition - as their versions tend to omit this crucial (for us, anyway) element. There is also a lengthy rehearsal segment featuring Choi Min-Sik's Mr Baek singing to the kids in his class which, after watching the film first, made my skin crawl. So, not very enlightening, I'm afraid.

Then we get two Theatrical Trailers that produce slightly different takes on the movie, but are both pretty good.

And that's your lot. Not very special, eh?

Sympathy For Lady Vengeance is a splendid movie. Stylish, meticulously crafted and performed, and laced with the dangerous taboo topics of child murder and grotesque revenge. I'm a very emotive person and there are scenes in this that hurt. Park's awesome ability to keep you glued to the screen throughout tales that, when all said and done, are righteously unpleasant and uncomfortable, is commendable. Here, he skirts the more violent aspects with an almost regal skill. Having said that though, I would still have much preferred to witness the full-on gory retribution with clinical clarity. I, for one, totally applaud the theme of natural justice being meted out and it is great to see it re-enacted without a simpering Hollywood-style lapse into morality. Child killers should be torn apart. Period. And Park has the guts to enforce that view without pandering to the do-gooders.

As the finale of the Revenge Cycle, it lacks the impact I'd expected. But, I suspect that this film is a steady grower and will gain more resonance for me as time goes by. He may have injected a little too much brevity and irreverence during the first half, but overall the film is a tremendous exercise in cinematic verve and hard-hitting, confrontational themes.

The Hong Kong disc has a fair-to-middling visual transfer, very good sound in the DTS-ES track - when called upon - but a dearth of extras. However, unless the special features on the Korean release have English subtitles, this could still be the better option if they get that Dolby Digital error sorted out. Best to wait and see, I think. The film, itself, is very highly recommended and, of course, may yet be better treated on R1 or R2.