Let's all go on a subterranean excursion 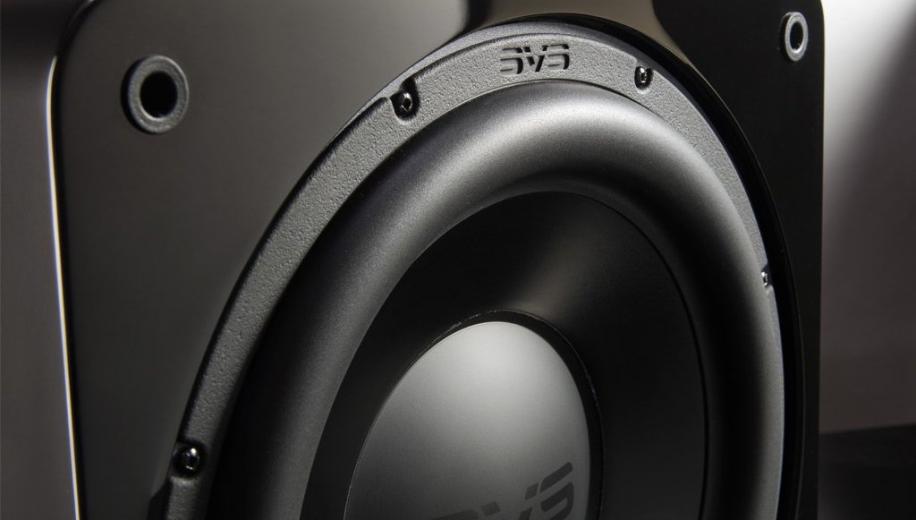 The SVS 3000 Series is the latest subwoofer range from a company that is synonymous with deep bass. It uses innovations first introduced on the flagship 16-Ultra range and is built around an all-new 13-inch high-excursion driver. There's also 800W of Sledge amplification, a new rear panel Intelligent Control Interface (ICI), and the company's excellent remote app. The range is made up of the SVS SB-3000 sealed unit being reviewed here, and the larger SVS PB-3000 ported model.

SVS has designed the 3000 Series to deliver a level of performance that approaches the 4000 Series at a more affordable price. The SB-3000 will set you back £1,275 for the ash matte black version and £1,349 for the piano gloss black finish, while the PB-3000 costs £1,549 and only comes in matte black ash. The company is clearly proud of the latest additions to its line-up, and promises a performance that's like ‘an iron fist in a velvet glove’. It's a bold claim, so let's see if the SB-3000 can deliver a knock-out punch.

The SVS SB-3000 is designed to deliver maximum bass from a minimal footprint. It uses a compact sealed cabinet equipped with a double-thick MDF front baffle and rigid bracing to support the new 13-inch high-excursion driver and ensure an acoustically inert performance. Considering the size of the driver, this SB-3000 is surprisingly small, but the design doesn’t really deviate from the traditional cube.

One SVS design touch I could do without is the non-resonant steel mesh grille. Thankfully, it's removable, using studs to attach to the front baffle. The grille might provide a degree of protection but personally, I think it’s ugly: give me traditional black fabric any day. On the plus side, SVS has ditched the annoying blue light previously found on the front of its subs. So no need to get out the black electrical tape.

This subwoofer has been designed primarily for use in a home cinema, and as such the connections are fairly minimal. Basically, you get a stereo phono input (one of which doubles as an LFE input), and a stereo phono output. There’s also a 12V trigger and a USB port, with the latter allowing for firmware updates or powering the SVS SoundPath wireless adapter.

The design is simple, but the build quality is great and the finishes are attractive

The SVS SB-3000 boasts some of the most sophisticated subwoofer technology that the company has ever developed. Pride of place goes to the completely new 13-inch high-excursion driver, which has been designed to deliver incredibly low frequencies while retaining plenty of speed in the transients and pin-point precision, control and accuracy.

The driver uses a lightweight and rigid aluminium vented cone with a composite fibre dustcap, which is combined with a proprietary injection moulded gasket and long-throw parabolic surround to allow for extreme excursion and incredibly deep bass. There's a dual ferrite magnet motor assembly weighing over 11kg, along with a flat edge wound split-wind voice coil within the motor assembly. Together, they deliver sufficient power at the highest excursion levels, but reduce mass and improve overall driver efficiency.

The driver’s ability to move massive amounts of air is backed up by a rear-mounted Sledge STA-800D2 amplifier, combining the high current output of discrete MOSFETs with Class D efficiency to deliver a claimed 800W RMS and peaks of up to 2,500W. All this is governed by a 50MHz Analog Devices DSP with 56-bit filtering that SVS claim is the most advanced digital processor ever used in a subwoofer.

The rear panel also boasts a new Intelligent Control Interface (ICI) which is really just a fancy name for a bunch of touch buttons and an LED display. It allows you to adjust the volume, crossover and phase, but frankly, it makes more sense to do all the adjustments using the SVS smartphone app. Partly because it doesn't require peering over the top of the sub, and partly because most adjustments are best made while sat at the main listening position.

The connections are simple, but the remote app is a tweaker's dream

In terms of set up, I positioned the SVS SB-3000 at the front of my dedicated home cinema between the front left and centre speakers, in a spot I know is fairly balanced. The sealed cabinet and forward-firing driver make this subwoofer reasonably flexible when it comes to installation

I then connected the sub to my Arcam AVR850 and began the rest of the setup. I had a go at using the Intelligent Control Interface (ICI) at the rear but, ultimately, I mainly used the remote app. The SB-3000 paired with my iPhone X immediately and the connection was responsive and robust.

The home page of the app allows you to set the subwoofer volume, and you can also access a range of options from which you can select Low Pass Filter, Phase, Polarity, Parametric EQ, Room Gain Compensation, Presets and System Settings. For each of these options, there is an additional help page that explains what the feature does and how best to set it.

You can set up the sub so that it is On (which is the default), in Auto (which means it comes on when there's a signal) or you can use a Trigger as part of a controlled system. You can turn the low pass filter on or off depending on whether you're using the sub with a Low Frequency Effect (LFE) channel.

There's also a Phase control, which allows you to shift the timing of the subwoofer output to align with the main speakers or additional subwoofers, and a Polarity control that allows you to reverse the electrical polarity from positive (default) to negative, if necessary.

The Room Gain Compensation control allows you to adjust for excessive sound wave density in smaller rooms by reducing the bass at either -6 or -12 dB per octave, below a frequency that is adjustable from 25 to 40 Hz. You do this by turning the room gain compensation on or off and adjusting the high pass frequency and the adjustment slope.

There's also a Parametric EQ control with three EQ adjustments that you can use to compensate for peaks and dips in the acoustic signature of the room that couldn't be avoided during initial placement. Each of these EQ adjustments can be set for Frequency between 20 and 200 Hz in single Hz increments, for Boost in a range that goes from +6 to -12 dB, and for Q Factor (bandwidth) from 0.2 to 10.

You can create presets as well, with the option of no preset, a Movie preset for when using the SB-3000 with film soundtracks (which introduces a mild bass boost), a Music preset for listening to two-channel music with a subwoofer (which is flat) and a Custom preset if you'd rather create one of your own.

The SVS SB-3000 certainly boasts some impressive specifications, and the remote app is an excellent tool for effective set up. However, all of this is meaningless if this subwoofer can't deliver the low frequency slam that SVS is boasting. Thankfully, it does, and its ability to fill my home cinema with extreme levels of bass energy really put a smile on my face.

As usual, I kicked things off with a couple of tests designed to sort the subwoofer wheat from the chaff: the bass notes at the start Edge of Tomorrow and Blade Runner 2049. The SVS didn’t break a sweat with either film, energising the entire room with a huge amount of bass and giving both films a sense of scale that was undoubtedly the filmmaker’s intention.

Once I had established that the SB-3000 was as capable as SVS claimed, it was time to see if it had the ability to deliver all that bass in a controlled manner. In the past, SVS subs have gained a reputation for a fun, if rather unruly performance, often delivering low-end slam that could be overpowering. More recent models like the PC-4000 have shown a degree of restraint, and this latest addition is no exception.

Aquaman boasts a truly titanic soundtrack that uses ridiculous amounts of bass at almost every opportunity. It's often comical how the lower frequencies are used to add impact to even the slightest action scene. It's easily one of the most bass-heavy soundtracks that I've ever experienced, with every punch, kick, and explosion hitting with the power of a sledgehammer.

The climactic battle is a great example of the film's prodigious use of low-end slam, with every blast and explosion hitting with the kind of seismic impact that will have you diving for cover. All the various massive aquatic creatures are given a real sense of scale, and the SB-3000 was capable of reproducing the subsonic frequencies in a powerful and sustained manner.

It's this kind of performance that differentiates a higher-end subwoofer from something more affordable. The cheaper subwoofer models will simply struggle struggle to achieve the kind of subterranean bass that the SB-3000 produces with ease. Ultimately, that’s what you’re paying for: a sense of control and composure to accompany the raw low frequency power.

However, the SB-3000 doesn’t just deliver these crushing levels of sub-sonic energy like a bodybuilder in hobnail boots; it manages to retain the accuracy and precision that differentiates a good sub from a great one. There’s a speed to the pistonic motion that allows the transients to stop and start on a dime, ensuring that the bass underscores the action, rather than dominates it.

What's even more remarkable is how deep and powerful the SB-3000 is considering its relatively small cabinet. However, it never loses its sense of timing and precision, delivering pin-point accuracy and plenty of speed. SVS's more recent subwoofers might lack the unbridled oomph of previous models, but these new and more controlled offerings deliver greater refinement with both movies and music.

Speaking of music, A Star is Born offered the ideal opportunity to test this sub's musicality. The drumming on the soundtrack is delivered with a percussive attack that drives the live musical numbers and gives the on stage scenes a visceral reality. This responsiveness and pin-point control are typical of a sealed unit, but the SB-3000 digs deep as well, producing pulse-racing but distortion-free bass.

The SVS SB-3000 has certainly achieved the company's ambition of delivering a massive amount of bass from a relatively small footprint. It also successfully integrates innovations first introduced in the 16-Ultra range and does so without sounding like a lightweight version of the SB-4000. There is nothing about this sub that suggests you are taking a step down from the range above, and it delivers a muscular but controlled performance that is just as exciting.

Whether you are watching TV or movies, playing games or listening to music, the SB-3000 has you covered with the kind of bass extension that is both controlled and precise. It retains a refinement and musicality that is genuinely excellent but still delivers seismic levels of low frequency energy. The fact it can do so at a reasonably affordable price is even more impressive. So, if you like deep bass combined with agility and an accurate sonic signature, then the SVS SB-3000 is sure to please.

If you've got the extra budget then an obvious alternative would be the SVS SB-4000, which is an absolutely superb subwoofer and currently costs around £1,799. In terms of cheaper options, the REL T/7i can be picked up £749 and is just as beautifully made. It also delivers exceptional agility and transient speed, but doesn't reach the depths of the SB-3000. That's definitely not something of which you could accuse the GoldenEar SuperSub X. This £1,449 subwoofer goes extremely deep, making it ideal for movies. It's also well built and easy to place, but lacks the subtlety required for music.