If you want deep bass but have limited space, go cylindrical! 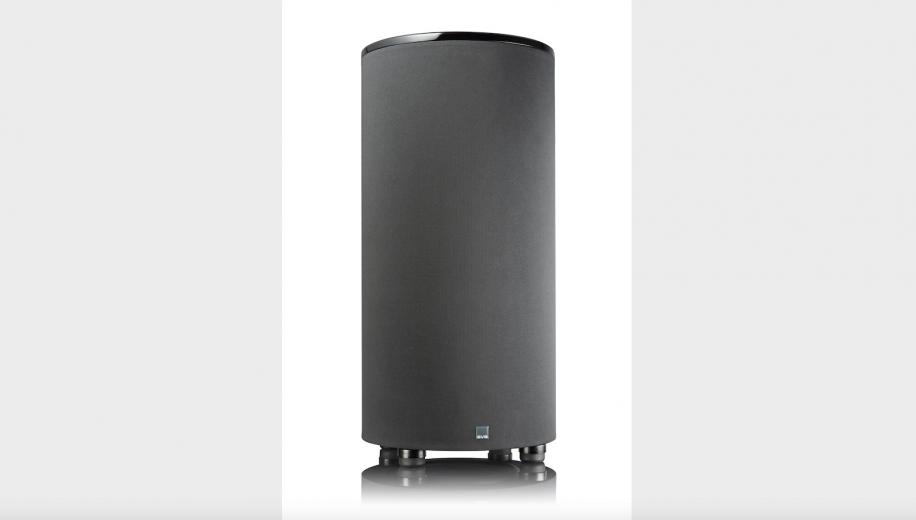 The SVS PC-2000 Pro is the latest cylindrical model from a company that has made this particular approach to subwoofer design something of a speciality. It forms part of the upgraded mid-range 2000 Pro Series that includes the ported PB-2000 Pro and the sealed SB-2000 Pro.

The sub is available in two finishes, and at the time of writing (July 2020) premium black ash costs £832, and piano gloss black will set you back £999. Let see how it compares to the SB-2000 Pro and find out if the PC-2000 Pro delivers maximum bass from minimum space.

The SVS PC-2000 Pro is a cylindrical subwoofer that, like all cylindrical subs, closely resembles a big black pedal bin. This model is 872mm high, but its 422mm diameter means it has a relatively small footprint. As a result, it can be placed in the corner of the room and, despite its height, remain surprisingly unobtrusive. However, its size and weight (21.5kg) does make moving it on your own a challenge. The build quality is excellent, with robust MDF construction and internal bracing.

There’s a downward-firing 12-inch high-excursion driver, and a rear-firing 4-inch port. Also at the rear is the amplification and Intelligent Control Interface (ICI). The entire cylinder is wrapped in a fabric grille, with a choice of either a black ash or piano gloss top cap. The PC2000 Pro uses SVS’s SoundPath Subwoofer Isolation System, which is basically four elastomer feet that decouple and isolate the sub from the floor, resulting in tighter and cleaner bass with less room rattle and bass bleed into other rooms.

The SVS PC2000 Pro has a surprisingly minimalist rear panel that houses a stereo/LFE phono input and stereo phono output, along with a 12V trigger and a connection for SVS’s SoundPath adapter for wireless subwoofer placement. There’s also an auto/on feature, so you can choose between always on or powering up on receipt of a signal.

Like the rest of the 2000 Pro range, the cylindrical model includes the Intelligent Control Interface (ICI). This multi-function control panel replaces the usual knobs and dials with a series of buttons, which provide access to volume, phase and low-pass filters. The ICI provides feedback on what you’re doing via a series of multifunction LED lights.

The 2000 Pro series is now the entry-point in SVS’s range for its Bluetooth remote app. This is available for iOS, Android and Amazon operating systems, and provides a highly effective method of setting up and controlling your sub. Since it uses Bluetooth you don't need line-of-sight, and you can do everything from the sweet spot. No more peering down the back of the sub in the dark!

You can use the app to change the volume, choose preset sound modes, make crossover and polarity adjustments, select room gain compensation, and access the three-band parametric EQ, while the bidirectional feedback shows your changes in real time. This is an excellent feature, and very useful with the PC-2000 Pro because cylindrical subs are often placed in a corner, and if you do you can't see the ICI.

The SVS PC-2000 Pro uses a 12-inch high-excursion downward-firing driver, with an aluminium vented cone designed to ensure a light, ridged, and neutral radiating surface. This improved stiffness to mass ratio is combined with a proprietary injection moulded extreme-excursion surround for faster pistonic motion with better control and accuracy.

There's a downward-firing 12-inch driver, a 4-inch bass port at the rear, and 550W of Sledge amplification

There’s a 15lb dual ferrite magnet motor assembly to generate the huge magnetics needed to produce extreme driver excursion without losing control. SVS claims the PC-2000 Pro has a frequency response of 16-290Hz (+/-3dB) in standard mode, and 17-290Hz (+/-3dB) in sealed mode with a foam bung in the rear bass port.

Power is provided by a Sledge Class D amplifier rated at 550W RMS, with peaks up to 1,500W. This moves large amounts of current thanks to fully discrete MOSFETs, for an improved performance at all drive levels. There’s also a 50MHz Analog Devices Audio DSP with 56-bit filtering and frequency response curves that are specially optimised.

In terms of setup, the SVS PC-2000 Pro was positioned at the front of the room in the right hand corner. In this location the Intelligent Control Interface (ICI) is difficult to actually access, but the remote app is a better method of setting up this subwoofer because you can do everything while comfortably sat in the sweet spot.

The app automatically connects with the sub, and the home page allows for easy setting of the subwoofer volume. It also provides access to the Low Pass Filter, Phase, Polarity, Parametric EQ, Room Gain Compensation, Presets and System Settings. Each of these has an additional help page that explaining what it does and how best to set it.

The Bluetooth app is effective, flexible and intuitive – making setting up and controlling the sub a piece of cake

By default, the sub is set to on, but you can choose auto, which means it comes on when there's a signal, or use a Trigger as part of a control system. You can turn the low pass filter on or off depending on whether you're using the sub with a Low Frequency Effect (LFE) channel. There are also Phase and Polarity controls for adjustment if necessary.

Room Gain Compensation adjusts for excessive sound wave density in smaller rooms by reducing the bass at either -6 or -12 dB per octave below a frequency that is adjustable from 25 to 40 Hz. You do this by turning the room gain compensation on or off and adjusting the high pass frequency and the adjustment slope.

There's also a Parametric EQ control with three EQ adjustments that you can use to compensate for peaks and dips in the acoustic signature of the roomt. Each of these adjustments can be set for a frequency between 20 and 200 Hz in single Hz increments, with a boost in a range that goes from +6 to -12 dB.

Finally, you can create presets as well, with the option of choosing between no preset, a movie preset for film soundtracks (which introduces a mild bass boost), a music preset for listening to two-channel music with a subwoofer (which is flat) and a custom preset if you'd rather create one of your own to suit your personal preferences.

The SVS PC-2000 Pro perfectly encapsulates all the benefits of a cylindrical subwoofer – it’s not quite as big as the ported model in the range, but it can deliver bass that’s almost as deep without being as intrusive. And while it's not as small or nimble as the sealed unit, it can obviously go that bit deeper.

That’s the beauty of a cylindrical sub – deeper bass from a smaller footprint that allows for greater freedom in terms of positioning, especially in the corners of rooms. Thanks to its vertical size the PC-2000 Pro is also capable of delivering deep and controlled bass that you can genuinely feel.

As a result the PC-2000 Pro handled the opening of Edge of Tomorrow extremely well, reproducing the seismic bass notes that kick off the film with power and serious depth. The low frequency effects are clean and free of distortion, but the SVS is also highly responsive, with a performance that’s tight and nuanced.

As a result this cylindrical beauty is capable of a delivery that’s fast and responsive, as well as subterranean. Watching the Live Aid sequence at the end of Bohemian Rhapsody reveals a sub that’s able to harness its power, and release it with speed and ferocity, remaining taut as it hits the drum beats with precision and doesn’t linger.

Considering this is an SVS sub and it's fairly big, there’s a surprising amount of subtlety. As a result it doesn’t swamp soundtracks with excessive bass, and instead seamlessly integrates with the other speakers, adding the necessary low-end support without pushing the overall sound field off balance.

This is perfectly illustrated during the scene in 1917 where an underground bunker is destroyed. The initial explosion is delivered like a sudden gut punch, and is wonderfully fast and precise. After that first bang, the LFE that then accompanies the collapsing ceiling is powerful and expansive, helping to sell the illusion of tons of rubble falling on your head.

While surprisingly subtle for an SVS sub, it can still deliver the big bass moments when required

This cylindrical subwoofer is certainly capable of delivering the big bass moments when required, but the PC-2000 Pro's controlled performance and general lack of distortion means it has a presence that is felt as much as it's heard. This allows it to give stand-out scenes greater impact, ensuring the bass underscores the action.

A good example is when Harley Quinn blows up the Ace chemical factory in Birds of Prey. This particular act allows the PC-2000 Pro to show off twice. Firstly when she initially destroys the factory there’s a huge explosion to which the sub provides an epic low frequency foundation. However, when the explosion is heard again later in the film from a different character’s perspective, the speed of the sub will catch you off guard with a jolting bass hit.

This sub is primarily aimed at film fans, but if you want to use this sub with music, the good news is that it has the speed and agility needed. For the best results, you might want to pop the foam bung into the rear bass port, and selecting the Music preset wouldn't be a bad idea either. But rest assured, the PC-2000 Pro is capable of a musical delivery that's both tight and highly articulate.

The SVS PC-2000 Pro might well be the perfect half-way house for those wanting the depth of the PB-2000 Pro combined with the smaller footprint and nimble delivery of the SB-2000 Pro. You also get a sub that's flexible in terms of positioning, and if you stick it in the corner it will take up very little space. But that’s not to say the SVS is discreet – it’s still a big black cylinder – so bear that in mind if you’re planning on putting one in your lounge.

However, the PC2000 Pro isn’t just practical, it's also extremely good, This woofer is capable of delivering deep and distortion-free bass with a surprising degree of subtlety. As a result, it can handle both music and movies, with a fast and responsive delivery that suits the former, combined with a powerful and deep low frequency attack that will enhance the latter. The improvements made by SVS mean you can also benefit from innovations previously only found further up its range.

The SVS PC-2000 Pro is also excellent value when you consider its build quality, features and performance, making it hard to fault. The connections are limited, and there's no auto EQ feature, which means for an optimal setup you may need to do certain things manually, but the smartphone app is excellent and offers plenty of flexibility. Overall, this iconic sub is well made and expertly engineered subwoofer, delivering an impressive performance. It comes highly recommended.